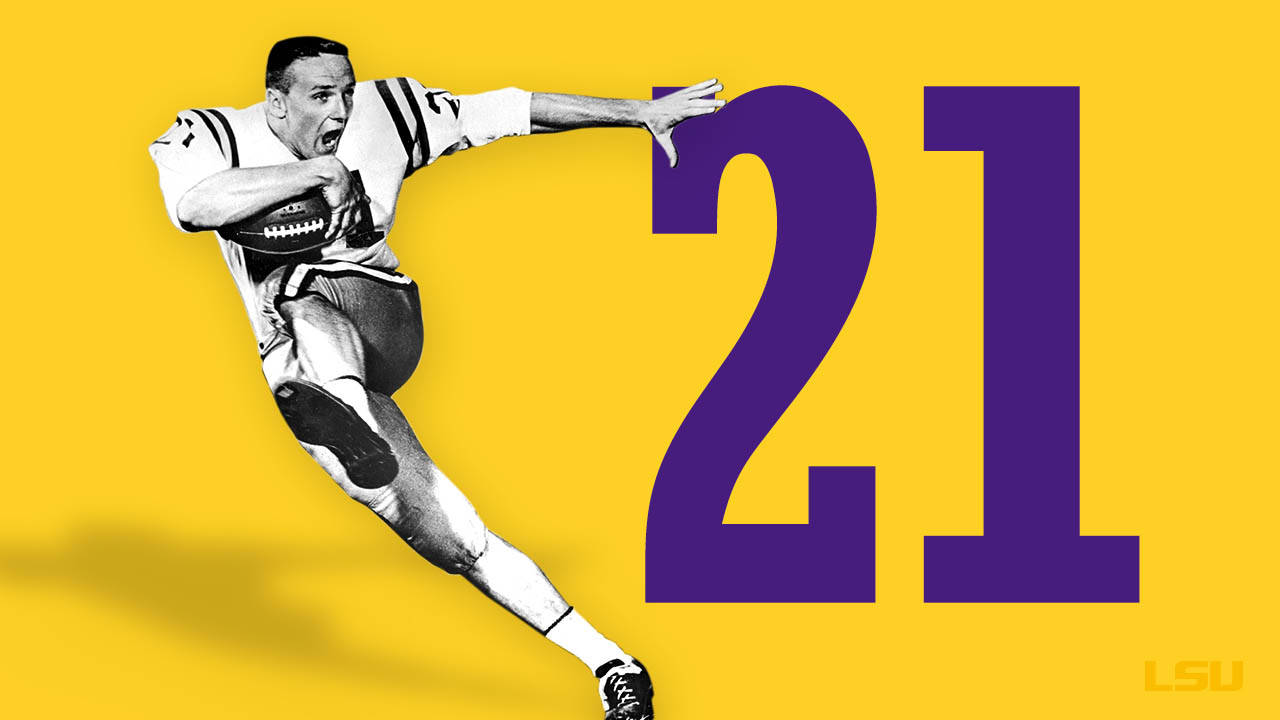 The jersey will be retired by LSU in a halftime ceremony on Oct. 13 when the Tigers take on Georgia in Tiger Stadium.

The No. 21 worn by Stovall will join the No. 20 worn by Billy Cannon and the No. 37 worn by Tommy Casanova as retired jerseys in the LSU football program.

“Jerry Stovall was one of the greatest players in LSU football history,” said LSU Vice Chancellor and Director of Athletics Joe Alleva, “and he is a man of tremendous integrity who has represented our university with dignity throughout his life. We are honored to recognize in Tiger Stadium his legacy of excellence.”

“This is the most humbling honor that you can ever imagine,” Stovall said, “because it’s an honor that you never, ever consider to be within your grasp. I was fortunate to play at LSU at a very special time when we had an extremely talented group of players, coaches and trainers. Any player from that time that has won an award has always said, ‘There is only one name on this trophy, but there should be 100 names on this trophy.’ This honor is for all of the young men that were my teammates and the coaches that pushed us to strive for greatness.”

Stovall, who was inducted into the College Football Hall of Fame in 2010, was a unanimous All-America selection in 1962. He was known as “Mr. Everything” for LSU, playing halfback, defensive back and kick returner while also handling punting duties during his three varsity seasons in Baton Rouge.

A two-time All-SEC First Team selection, Stovall was named the conference’s Most Valuable Player in 1962 en route to finishing as the Heisman Trophy runner-up behind Oregon State’s Terry Baker. A member of the 1961 SEC Championship team, he finished at LSU with 1,081 yards and 13 touchdowns on the ground, adding 452 yards and one touchdown receiving.

He also held the LSU record for highest punting average (42.1) in a season, amassing 165 attempts for 6,477 yards by his career’s end. Stovall gained nearly 700 return yards on special teams and recorded seven interceptions as a defensive standout.

Selected in the first round of the1963 NFL Draft by the St. Louis Cardinals, Stovall played nine years in the NFL and was twice named to the All-Pro team. He was also selected to three Pro Bowls.

Stovall later entered coaching and returned to LSU as head coach from 1980-83. In 1982, he was named the Walter Camp Football Foundation Coach of the Year after leading the Tigers to an 8-3-1 record and an Orange Bowl appearance.

About Retired Jerseys/Numbers at LSU Athletics

To have a jersey retired at LSU, an athlete must have completed intercollegiate competition for LSU a minimum of five years prior to nomination. Athletes must have demonstrated truly unusual and outstanding accomplishments, exceeding and in addition to all criteria used for Hall of Fame selection. The athletic performance must be considered unique, such as winning of a Heisman Trophy or National Player of the Year award, and should be based on the total LSU career. Athletes may also be considered for making dramatic impact on the popularity of his or her sport or for significant participation in positive change in LSU Athletics. Nominees must have a unanimous vote of support from the Hall of Fame committee.

Under a provision of the LSU jersey retirement bylaws established Jan. 1, 2007, the retirement of an athlete’s jersey in a particular sport does not preclude a current student-athlete in that sport from wearing the jersey number in that or any other sport, subject to the discretion of the head coach. This provision applies only to jerseys retired after January 1, 2007. The numbers worn by Maravich, Pettit, O’Neal, Cannon and Bertman may never again be worn by future student-athletes in their respective sports.