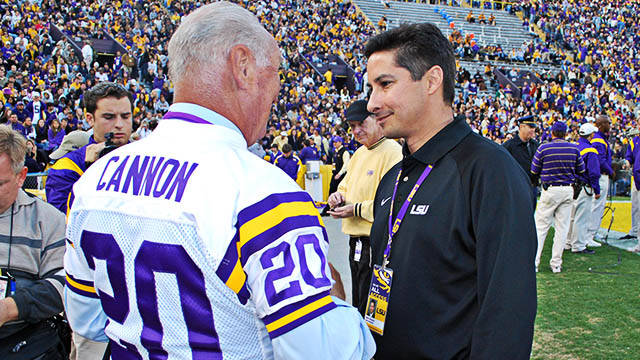 BIRMINGHAM, Ala. – The Southeastern Conference announced today that Herb Vincent has been hired as Associate Commissioner for Communications for the conference.

Vincent currently serves as Associate Vice Chancellor for University Relations and Senior Associate Athletics Director at LSU. He will begin his new role with the SEC in September.

“Herb brings a wealth of experience as well as energy and passion for the SEC,” said Commissioner Mike Slive. “His experience at LSU and other levels of sports and sports television will be a tremendous addition to the team. We are excited to have him back in Birmingham as a part of our conference staff and I know he’s excited to get to work on making the SEC family even stronger. ”

Vincent previously worked on the SEC staff from 1986 to 1987 as Assistant Director of Public Relations and served in increasing communications roles at LSU from 1998 until 2000 and again from 2002 until 2013 where he currently oversees communications and serves as the primary public relations officer for LSU. He supervises the sports information office and marketing and promotions office, serves as the primary liaison with LSU Sports Properties, and is the department administrator for baseball.

“Herb Vincent has served Louisiana State University magnificently,” Interim LSU President Dr. William Jenkins said. “I deeply regret losing him to the Southeastern Conference and I will miss him greatly. But this is a wonderful opportunity for him moving forward. He’s been superb. He is competent in every respect and has been responsive to our needs. We could not have had a more effective leader of our Communications and University Relations program. He could not have done more through some difficult times for this University and he was more than willing to handle whatever came up whether it was day or night. We wish him nothing but the best.”

He previously served as Vice President for Communications for the College Sports Southeast regional cable network in Birmingham before returning to LSU in 2002. He also spent two seasons working in the public relations offices for the USFL’s New Orleans Breakers and the Los Angeles Express. Vincent authored, “The LSU Football Vault,” on the history of LSU football.

“Herb’s contributions to LSU and his role in the accomplishments of the athletic department have been tremendous,” LSU Vice-Chancellor and Director of Athletics Joe Alleva said. “He’s been a great representative of LSU and we appreciate all that he’s done for this university. We wish him well on his new opportunity at the league office.”

Vincent earned a bachelor’s degree in journalism from LSU in 1983 and is originally from North Little Rock, Ark. His wife Jamey grew up in Versailles, Ky,. and they have a daughter, Kennedy.

In his new role, Vincent will be responsible for developing, implementing, and managing the overall communications strategies and efforts for the conference and will serve as spokesperson for the SEC and act as the primary liaison between the conference office and campus communicators.

“I am excited to join the SEC at a time when significant changes are taking place in college athletics,” Vincent said. “The level of excellence throughout the SEC is unparalleled and I am looking forward to working with the league staff and the 14 member institutions in continuing to build and promote the SEC brand.”