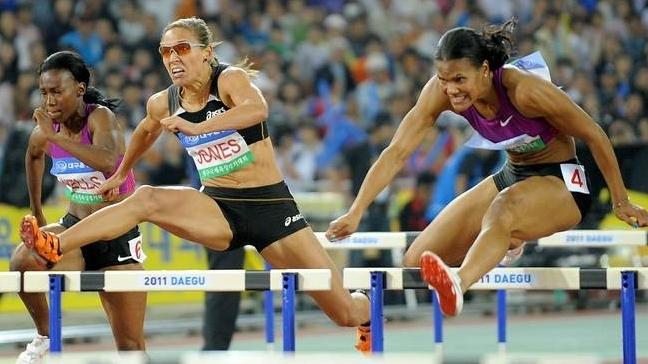 BATON ROUGE – The LSU Track & Field program and Lady Tiger great Lolo Jones will be featured in the latest edition of the SEC “Storied” documentary series as ESPN Films’ “Lolo” will premiere Monday, May 21, at 6 p.m. CDT to a worldwide audience on ESPNU.

Fans who attend Sunday’s finale at the 2012 SEC Outdoor Track & Field Championships have the chance to be the first to see the film as an exclusive broadcast will air on the high definition video boards at the Bernie Moore Track Stadium immediately following the conclusion of the meet.

“Lolo” documents one of the inspiring stories in all of sport as Jones has reached worldwide stardom with her performance on the track as an Olympian and World Champion.

In Thursday’s press release announcing the film’s debut, ESPN Films states, “Olympic athlete Lori ‘Lolo’ Jones is an expert at overcoming hurdles – both on the track and in life. ESPN Films’ ‘Lolo’ will explore Jones’ trying journey thus far; rising from poverty and homelessness, to be catapulted into world stardom, including a spot on the USA Olympic Track & Field Team and celebrity status.

Directed by Rory Karpf with NASCAR media group, “Lolo” features personal interviews from Jones, her parents, siblings, coaches, teammates and Olympic gold medalist Jackie Joyner-Kersee, along with never-before-seen footage of Jones in high school, college and during her 2011 surgery.

A native of Des Moines, Iowa, Jones is one of the beloved figures in the history of LSU athletics after she won three NCAA titles and 11 All-America honors during her collegiate career from 2001-04.

Since leaving the LSU program, Jones has risen to the pinnacle of international track and field as the two-time World Indoor Champion in the 60-meter hurdles and American record holder in the event with a best of 7.72 seconds run in winning the gold medal at the 2010 World Indoor Championships in Doha, Qatar.

Jones is looking to regain the form that earned her a spot on the U.S. Olympic Team in 2008 after she was the world’s No. 1-ranked 100-meter hurdler and star of the 2008 Olympic Games in Beijing. She is poised for a return trip the Olympic Games that will be held in London later this summer.