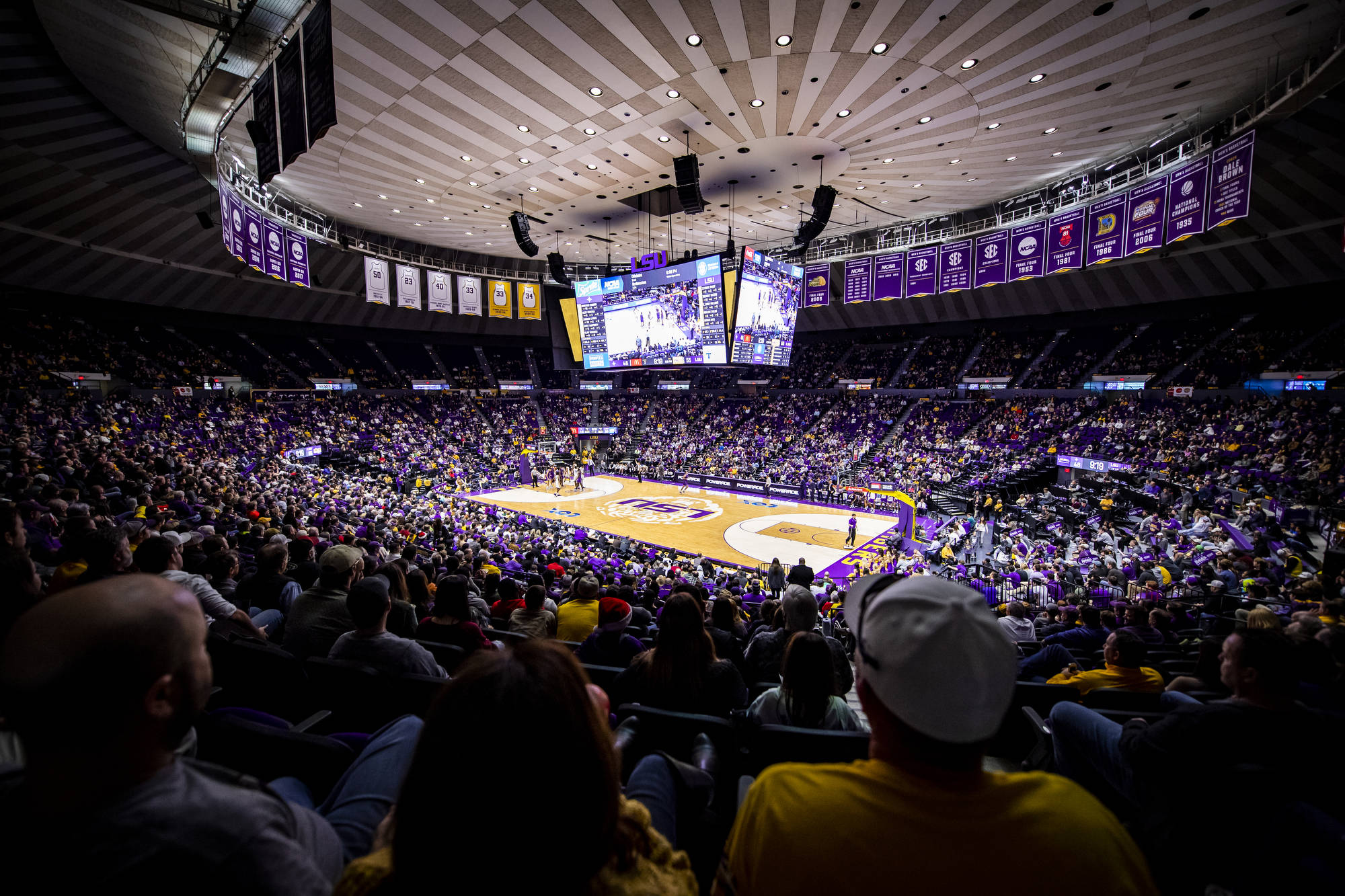 Just at a time when it appeared the Pete Maravich Assembly Center was past the point of being a first-class basketball building, the LSU Athletic Department stepped in and began a three-year campaign to spruce up the building that has been known since 1988 as the PMAC.

In a year when the building would also become famous worldwide as the site of the largest triage unit in history after Hurricane Katrina, the athletic department was able to finish its renovation in time for the 2005-06 season and turn the building back into a showcase for LSU men’s basketball.

Now the building enters its 50th season of men’s basketball play during the 2020-21 season, continuing the tradition of play in the building while incorporating the modern video and technical aspects that are part of the game today.

An interactive concourse area depicting the history of the great players who have starred for LSU in the building, additional restrooms, new seats throughout the arena along with increased court lighting has taken the building to a new level.

In 2010, the building took a major step forward with a practice facility attached to the building for men and women along with a new men’s locker room complex that has helped raise the Assembly Center’s appeal for players and fans for years to come.

The Maravich Assembly Center is, like the other venues LSU basketball has bounced around in through its long history, unique in its own way. Before moving across from Tiger Stadium, the Tigers set up shop in the Pavilion on the old LSU campus, the Huey Long Field House Gym Armory (now the Cox Communications Academic Center) and the John M. Parker Agricultural Center. LSU and SEC fans knew the latter as the “Cow Palace” as it served as the primary home for LSU basketball for four decades.

The building opened as the LSU Assembly Center. During the summer of 1988, then Louisiana Governor Buddy Roemer signed legislation changing the official name of the building to the Pete Maravich Assembly Center in honor of the LSU star who had died tragically earlier that same year.

The Maravich Center is also the home for the LSU volleyball, gymnastics and women’s basketball teams.

Pete Maravich never got to play any of his college ball in the Assembly Center, but the plans for the building came while he and the Tigers were packing the “Cow Palace” from 1967-70. So like Yankee Stadium being the “House that (Babe) Ruth Built”, the Assembly Center can certainly be classified as the “Palace that Pete Built.”

On July 1, 2004, the management of the Pete Maravich Center came under the direction of the LSU Athletics Department. One of the primary functions was to improve the quality of the building both in the arena and on the upper concourse.

For years, the upper concourse of the Maravich Assembly Center was just an entranceway and a walk area for people heading to their seats. There were a few pictures, concession stands and a few restrooms, but it wasn’t a special place to spend time before the game started.

Thanks to the LSU Athletics Department, all that has changed. Now the concourse is a fan’s delight, looking back at the past and present of the four teams who compete in the building.

The concourse is divided into four quadrants: Pete Maravich Pass, The Walk of Champions, Heroes Hall and Midway of Memories.

Prior to the 2017-18 season, the Maravich Center installed new video boards that at the time were the largest center hung boards in the nation. The four screens — two facing the sidelines at 42 feet long and 21 feet high, as well as two facing the baselines at 24 feet by 20.5 feet — were priced at over $3 million. The project was fully funded by the Tiger Athletic Foundation. The boards feature a dedicated area for game-in-progress information like score and time on the clock, as well as individual and team statistics.

11.5 Million
Original cost of building — $11.5 million; one of the most visible structures on campus.

East to West
East-to-West, you can put a football field and still have almost 33 yards of space left.

North to South
North-to-South, you can put another gridiron and have about 13 yards extra.

1,750
A total of 1,750 tons of air conditioning keeps the interior at year-round comfort.

At the start of the 2010-11 season, LSU Basketball and its ability to prepare for games and have a place where the team can come together to work to be better became a reality.

It is a place that was important to the present and future of the LSU men’s basketball program. The chance to schedule practice when needed and the chance to get shots up or work on free throws any time is what makes this facility so important to the players of this program. But it is also the team dressing room, training room, where all the equipment is available at a moment’s notice and meeting space for individual and team meetings is readily there.

They don’t live in the facility, but if a player wants to take the time there to learn and improve, it is there for them. In the last three seasons under Coach WIll Wade, the facility has seen players making that extra effort and taking those extra shots and watching that extra video. It has been proven by three successive seasons in which LSU was destined for post-season play.

There is another way you know the LSU practice facility is special. Ask the former players who are pleased that the Tigers program now has this wonderful facility, but are envious just the same.

“I’m actually jealous,” said Shaquille O’Neal. “I had to beg the security guards to let me in the (old) downstairs practice facility which at the time they called the dungeon. I spoke to the team and I said listen you got everything you want here … My message to them was take advantage of all this stuff.”

“It’s important for the program and it will give us a recruiting edge,” said another of the players whose jersey hangs from the rafters of the Maravich Center, Durand “Rudy” Macklin. “It will make a player want to come here. It’s a basketball player’s dream. It started here with a rubber floor and the ‘Dungeon’ … Now to see it come to this. I was born too soon.”

The facility features exact duplicate full-size gymnasiums for the men’s and women’s basketball teams. Each has two portable goals and four retractable goals, both are exact replicas of the PMAC competition court. Each gym features a scoreboard, video filming balcony and scorer’s table with video and data connection. Each gyms spans 11,324 square feet and includes a regulation NCAA court in length with two regulation high school courts in the opposition direction.

The building also includes a central two-story lobby and staircase that ascends to the second level that has a room that can hold approximately 500 people for pre-game and post-game functions that leads into the Maravich Center concourse. The lobby showcases team displays and graphics, trophy cases and memorabilia from the long history of LSU Basketball. It is also a convenient area for the men’s team to conduct their pregame and postgame media room which includes video screens and video and audio hookups.

Outside the facility are two statues that have joined the list of primary photo spots on the LSU campus — Shaquille O’Neal, dedicated on Sept. 8, 2011 and Bob Pettit, dedicated on Feb. 27, 2016.

The displays and wall graphics were designed by ZE Design of Centerville, Ohio.

The facility was constructed by Guy Hopkins Construction of Baton Rouge based on designs by the firm of Tom Holden Architects of Baton Rouge in a unique joint venture with RDG Sports of Des Moines, Iowa.

Contractors: Guy Hopkins Construction of Baton Rouge based on the designs by the firm of Tom Holden Architects of Baton Rouge in a joint venture with RDG Sports of Des Moines, Iowa