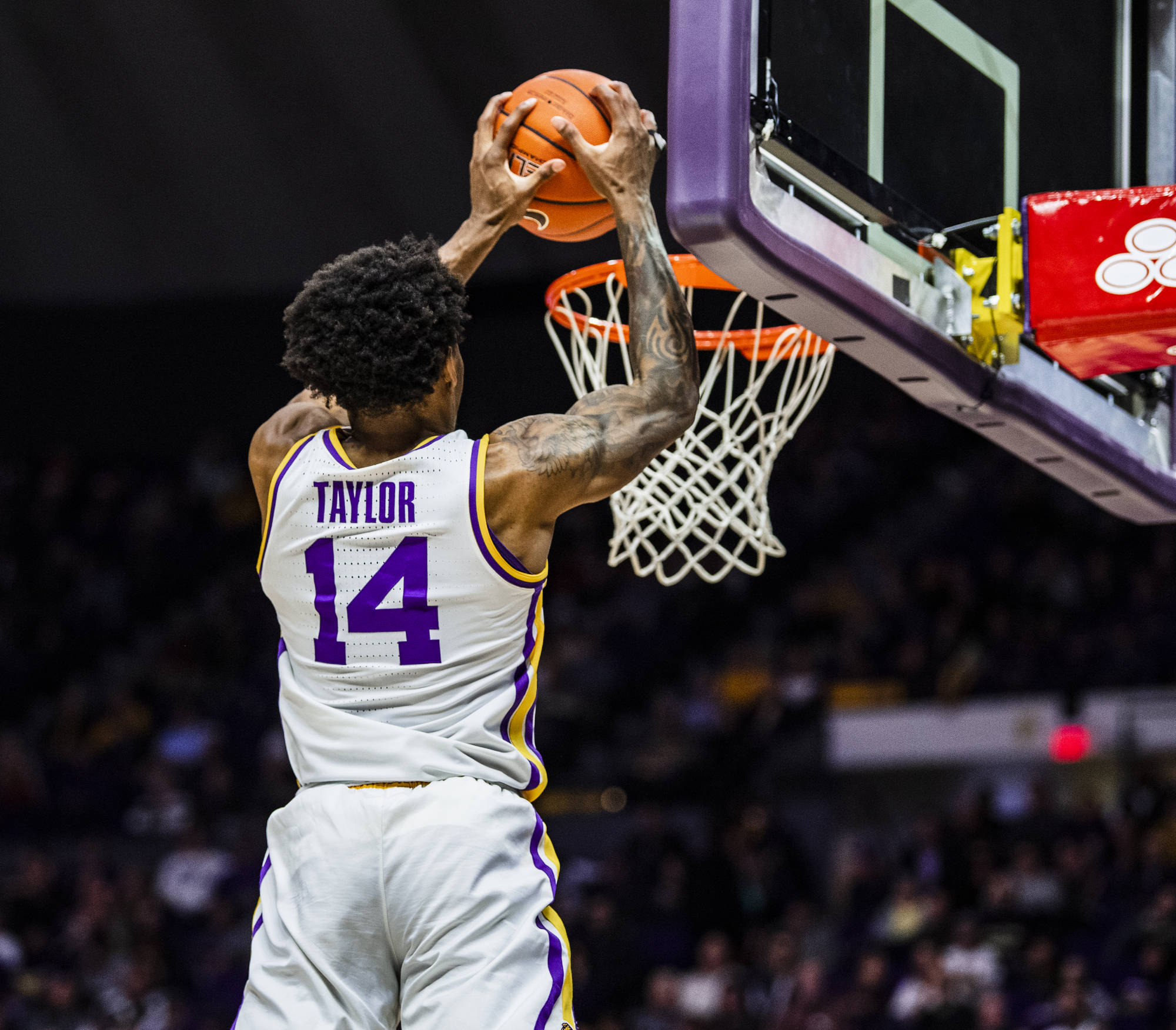 FAYETTEVILLE, Arkansas – LSU broke its nine-game road losing streak at the spot it won for the last time on the road – Bud Walton Arena – taking control of an overtime session to score a 94-88 Southeastern Conference decision over Arkansas Saturday evening.

The Tigers are now 12-3 and 2-0 in the Southeastern Conference going into a big early season road game Tuesday at The Pavilion in Oxford versus 3-0 Ole Miss (8 p.m. CT, SEC Network, LSU Sports Radio Network). Arkansas loses for the second consecutive home game for the first time since Coach Mike Anderson’s first season in 2012 and has a nine-game Saturday home game winning streak stopped as it drops to 10-5 and 1-2 in the SEC.

LSU was able to get the win after watching Arkansas outscore LSU, 39-31, in the second half to tie the game after 40 minutes at 81-81.

But Mason Jones would hit a layup with 1:02 to play and then Gafford had a dunk with 30 seconds left to tie the game at 81-81. Tremont Waters missed a running layup to the goal in the final five seconds and Reid tried to tap the offensive rebound but it fell off as time expired.

LSU, which evened its overtime record this season at 1-1, fell behind 83-81, in the first 19 seconds of the extra five minutes as Gafford hit a layup. But LSU took the lead for good on the ensuing possession as Ja’vonte Smart hit a three pointer with the shot clock running down to make it 84-83, LSU. Arkansas missed a trey and Reid hit his fourth three-pointer of the game to put LSU up four, 87-83, at the 3:22 mark.

The teams traded some points and LSU still had a three-point, 89-86 lead with 1:29 to play. On LSU’s next possession, the Tigers’ Skylar Mays drove for the bucket scored and was fouled, making the free throw to put LSU on top 92-86.

Arkansas would miss two three-pointers before an Arkansas turnover gave the ball to Reid, who was fouled and made two free throws to make it 94-86. The Razorbacks scored late for the final margin.

Reid had his second best scoring game of the season with 27 points on 10-of-12 shooting including 4-of-4 from the arc and 3-of-4 free throws. He also had seven rebounds and two assists in 26 minutes. It was the second game this season he had four three-pointers.

Marlon Taylor hit 7-of-8 field goals, including a perfect 6-of-6 from the free throw line to go with seven rebounds, while Tremont Waters tied his career high with 11 assists to go with 17 points and three steals in 42 minutes of play. Mays added 15 points in 41 minutes.

Darius Day, who played 12 minutes, was injured in regulation and there was no word on his condition after the game.

Gafford finished with 32 points for the Razorbacks on 14-of-19 shooting, with Mason Jones getting 22 on 6-of-10 shooting with two treys. Reggie Chaney added 12 points and four steals off the bench.

Both teams turned the ball over, with LSU committing 19 miscues and Arkansas 16. But the Tigers took better advantage of the turnovers, 23-17, on points off turnovers.

LSU, winning in Fayetteville for the eighth time in 27 visits, was able to take control of the lead in the early going, getting the lead on a Waters three-pointer at 7-4 two and a half minutes into the game. The Tigers kept the Razorbacks at bay, building a six-point lead on a dunk by Mays with 8:36 to go and that lead went to eight on a Mays three-pointer at 38-30, with 4:15 to go in the half.

At the start of the second half, Reid got a layup right off the bat to make it a 10-point game and when Taylor got a layup off an Arkansas turnover 2:30 later to push the LSU lead to 61-48, Arkansas was forced to call timeout.

The Tigers led by 13 again at the 11:42 mark after two free throws by Taylor, but the Razorbacks would rally, starting at the 9:19 mark after a Taylor dunk that gave LSU a 73-61 lead.

Arkansas got a trey from Jalen Harris, a Jones layup after a turnover, a dunk by Gafford and a free throw that cut the LSU lead to four, 73-69, with 6:48 to play. The run continued a minute later as Gafford was fouled and hit two more free throws to make it 73-71 and when Reggie Chaney hit a layup with five minutes to play, the game was tied setting up the frantic end of regulation and then LSU’s winning overtime.

After the Ole Miss game, LSU will return home to put its 16-game home winning streak on the line against South Carolina in a 5 p.m. tilt on Saturday, Jan. 19. Tickets are on sale during the week at the LSU Athletics Ticket Office and online at LSUtix.net.