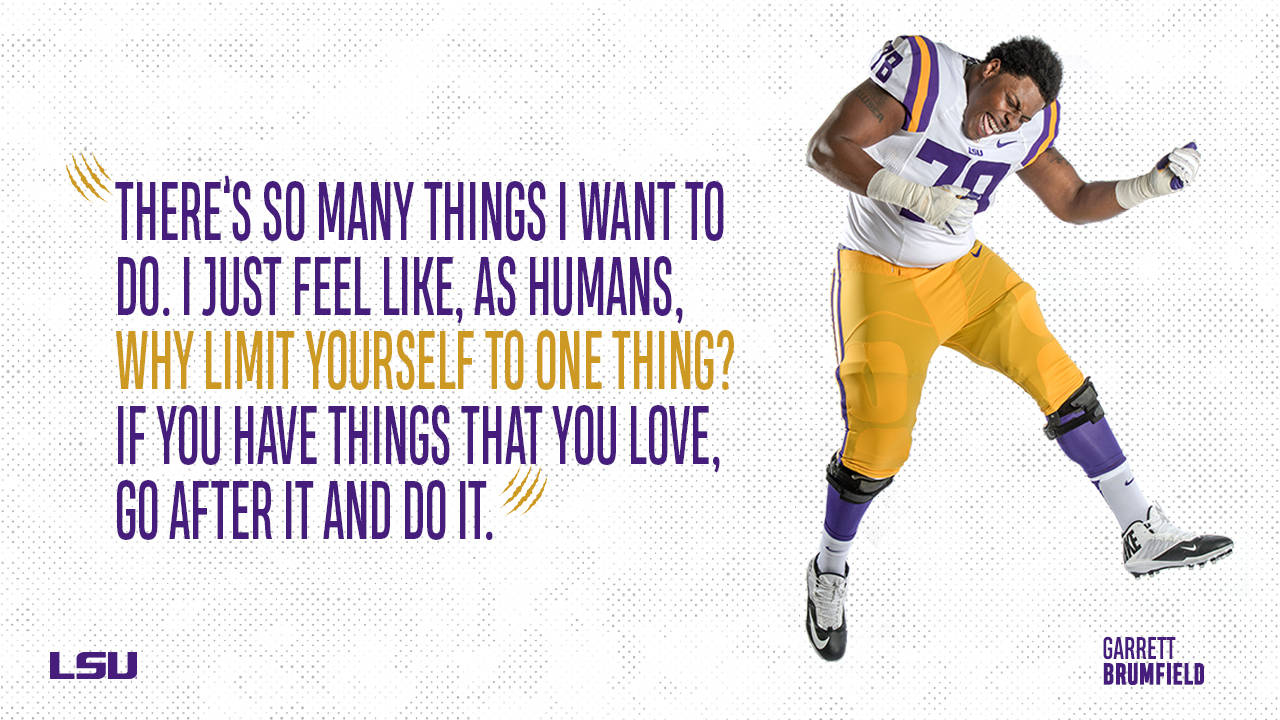 It’s a formula Nick Brossette has stuck to for nearly a decade of football, from their years as high school teammates to present day.

Wherever Bruiser goes, Brossette follows closely, stepping delicately over defenders who have learned – the hard way – just why Garrett Brumfield earned that nickname on his first day of tackle football.

“When we put the pads on,” says defensive tackle Breiden Fehoko, a frequent foe of Brumfield’s during one-on-one drills in practice, “he’s going to come down, and he’s going hit you.

Need more evidence? Just ask the recipients of the 53½ knockdowns Brumfield registered in 2017 – second-most on the team – and hope the fraction represents something other than a defender Bruiser literally broke in half.

Better yet, hope that he hasn’t actually knocked them into one of the 11 dimensions Brumfield knows could potentially exist beyond the three humans experience daily.

Like the universe he ponders daily, there is more to Brumfield than meets the eye.

“A four dimensional being,” he surmises to a table of reporters, “could essentially open a door, throw something through it, close the door, and what’s in that door would cease to exist to us, because we are three dimensional beings.”

That could explain the would-be tacklers who tend to disappear in Brumfield’s wake.

Simply put, he’s fascinating, because he is fascinated.

“I’ve always just been a guy that has a thirst for knowledge,” says Brumfield. “Whether it’s football, on the field, or off the field. I feel like you can never know enough.”

It’s why Brumfield devours podcasts and TED Talks, why he quotes Neil deGrasse Tyson and Michio Kaku, why he reads Stephen Hawking and spray paints galactic spacescapes in his spare time.

“I kid you not,” says tight end Foster Moreau, “Garrett is absolutely, 100 percent the person I would call if I was on ‘Who Wants to Be a Millionaire?’ He’s a sponge. He’s got so many secret talents you would never know about.”

One was on display his first year at LSU during the freshman talent show.

Brumfield is an amateur magician, the product of a childhood spent watching David Blaine “Street Magic” tapes with his older brother and mastering a magic kit his parents purchased for him on an anniversary trip to Vegas.

One trick he performed for his teammates involved then-fullback, now-strength coach Connor Neighbors, who picked a card from a deck Brumfield was shuffling. After showing the audience the card, Brumfield threw it back into a bag and shook it up.

Then he made a deal with Neighbors.

“If I pick your card out of the bag, you get nothing,” Brumfield said. “But if I pick the wrong card, you get a prize.”

Brumfield pulled a card out of the bag – the wrong one. Reaching into the bag for the prize, he pulled out a t-shirt with the right card printed on the front.

“Everybody loved it,” says Brumfield.

Everybody also loves visiting Brumfield’s apartment, because that’s where his recording studio resides.

Yes, he makes music, too.

He listens to and draws from artists ranging from Sam Cooke to Travis Scott, from Luther Vandross and Prince to Chance the Rapper, 50 Cent, and Kevin Gates. He prefers producing to performing and enjoys sampling because it binds generations of music lovers.

Brumfield’s inspirations and interests are all about testing boundaries and bucking convention, be it artistic or athletic. Take boxing, a sport he’s been endlessly fascinated by since he first watched Winky Wright fight Sugar Shane Mosley, for example. Muhammad Ali remains an idol because “he always searched to find who he was.” The poster of Ali’s anchor punch knockout of Sonny Liston hangs on Brumfield’s wall.

It’s not the only poster in the apartment. Brumfield is a cinema buff who writes his own screenplays. Sticky notes with movie ideas – these range from time travel to reincarnation – conceived by he and teammate John Battle adorn his studio wall.  His inspirations range from the westerns he watched with his grandfather growing up to The Godfather and Tarantino’s ouvre.

He studies movies like he studies game film, searching for the hidden details that distinguish mediocrity from greatness.

“I love cinema,” he says. “I love the construction and dialogue of movies. I always say, ‘I don’t watch movies. I analyze films.'”

In between the sampling and the screenwriting, Brumfield reads “Behold a Pale Horse” and “Astrophysics for People in a Hurry.” He contemplates the Pyramids of Giza, the Sphinx, Göbekli Tepe, and Atlantis. He binges YouTube videos and documentaries, and he studies Galileo, Aristotle, Plato, and Da Vinci, trying to see the world as they did: with endless curiosity.

“I think the world has so much wonder that one can’t help but wonder,” he says.

HIS TALENTS ON the field are less secret. There, he’s a vocal leader, equal parts nimble and nasty.

His mobility has always been a strength, dating back to high school, when his head coach at U-High, Chad Mahaffey, drew up a tackle screen to get Bruiser a touchdown and marveled at how smooth Brumfield looked with the ball in his hands.

When the Cubs broke fall camp each year, the linemen played a 7-on-7 game, and Brumfield caught touchdown pass after touchdown pass.

“He could move around a lot better than most of those guys,” Mahaffey says.

Brumfield was and still is also an unquestioned leader inside the locker room. He’s the offensive line representative on LSU’s leadership council, where his willingness to speak his mind is advantageous to all.

“His leadership has been critical,” says head coach Ed Orgeron. “His leadership, his communications, his smartness, his awareness and his ability to make adjustments on the sideline during the game, he’s like a coach on the field.”

In assuming leadership, though, he’s not become inaccessible. He’s a polymath, but he’s a populist, too.

“Sometimes, guys like that don’t fit in with most of the guys,” says Mahaffey. “He’s not like that at all. He’s always right in the middle of it.”

That includes, of course, an argument. From scariest films to conspiracy theories, Brumfield has an opinion on just about every topic.

Usually, it’s the opposite of yours.

“Garrett’s one of those guys that likes to keep poking at the issue,” Fehoko says. “Even though he knows you’re right, he likes to try to prove you wrong.”

Those that know him best, however, know his weak point.

“I can get under his skin any time I want,” says Brossette. “Just say dumb things to him.”

In this hypothetical time to come – decades from now, Brumfield hopes – his days of punishing defenders with bone-crushing blocks are finished, and he is now no longer playing football.

Instead, he is – well, what he’s doing depends on quite a bit. After all, string theory tells us the sixth dimension is a plane containing all possible worlds, and Brumfield’s intellectual and artistic curiosity means his future contains a large number of possible worlds.

“Honestly, I have interests in so many things,” he says.

He’s pondered Forex trading, the technology sector, and, of course, music. Teammates say he would make a phenomenal broadcaster.

For now, he’s focused on being a phenomenal lineman. The mindset that fuels his curiosity in life also fuels his competitiveness in football. He knows his game, like his mind, needs continual refinement.

It’s a theme evident in all walks of Brumfield’s life. He’s the perpetual student who puts his lessons into practice, and he believes one thing above all else – life should reflect the universe itself: a constant expansion into new horizons.

“There’s so many things I want to do,” he says. “I just feel like, as humans, why limit yourself to one thing? If you have things that you love, go after it and do it.”