Cannon Statue to be Unveiled Sept. 28 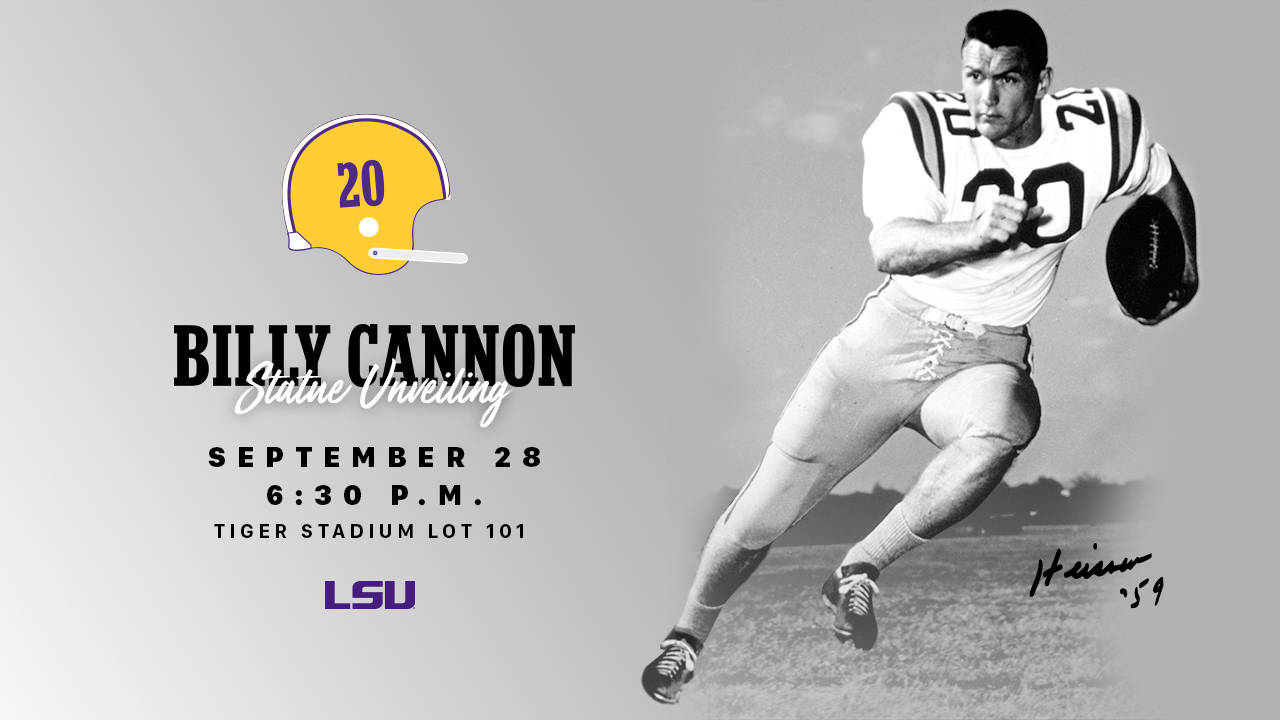 Update on Sept. 28, 2018: LSU and the Dr. Billy Cannon family announced today that the public unveiling of the Billy Cannon statue scheduled for 6:30 pm today has been cancelled. A private reception for invited guests will be held beginning at 4 pm. The announcement follows the tragic news of the passing of LSU basketball player Wayde Sims. The Cannon Statue, which is located in the Championship Plaza on the west side of Tiger Stadium, will be on display for the public to see on Saturday.

The private event for invited guests, including those teammates of Dr. Cannon from the 1958 championship team, will still take place from 4 to 6 p.m. in the Lawton Room on the west side of Tiger Stadium. The event in the Lawton Room is by invitation only and is not open to the public or members of the media. LSU appreciates your understanding during this very difficult time.

BATON ROUGE – LSU will unveil a statue of the late Dr. Billy Cannon, the school’s only Heisman Trophy winner, on Friday, Sept. 28, the night before the Tigers host Ole Miss in Tiger Stadium.

The Billy Cannon Statue will commemorate the accomplishments of the most heralded football player in LSU history. Cannon led LSU to the 1958 national championship and the following year won the Heisman Trophy as the top player in college football. Cannon remains LSU’s only Heisman Trophy winner. His No. 20 jersey was retired by the university in 1959.

“It’s fitting that Dr. Cannon will be the first and, so far, only football player at LSU immortalized in this way,” said Vice Chancellor and Director of Athletics Joe Alleva. “He and the 1958 team helped put LSU football on the map as a national powerhouse.”

The LSU Athletic Hall of Fame Committee unanimously approved a proposal that a statue honoring Cannon be erected on campus in August 2017.

The statue unveiling is open to the public and will take place starting at 6:30 p.m. at the Championship Plaza, which is located on the west side of Tiger Stadium in lot 101. The statue will serve as the centerpiece of an area dedicated to honoring many of LSU’s football accomplishments.

Cannon combined sprinter speed with brute strength. He consistently ran a 9.5 in the 100-yard dash and, at 6-foot-1, 210 pounds, he had the size to overpower his opponents as well as outrun them. He was an immediate standout as a sophomore in 1957, starring on both offense and defense for LSU.

After the 1958 season, Cannon finished third in Heisman Trophy voting behind Pete Dawkins of Army and Randy Duncan of Iowa. Nobody else was close, and Cannon led in the South and Southwest.

Cannon’s most memorable performance came in his senior season of 1959 against Ole Miss. Top-ranked LSU trailed the third-ranked Rebels 3-0 early in the fourth quarter when Cannon fielded a punt at the LSU 11 and broke seven tackles on his way to a winning touchdown, as the Tigers won 7-3. The run helped cement the Heisman Trophy for Cannon in 1959.

Cannon prepped at Istrouma High in Baton Rouge where he was an all-state halfback leading them to an undefeated season. Cannon gained more than 100 yards in 12 or Istrouma’s 13 games and scored 33 touchdowns.

Dr. Cannon earned his D.D.S. at the University of Tennessee and a master’s at Loyola University in Chicago. He was the Director of Dentistry at the Louisiana State Penitentiary in Angola before his retirement in January.

He was inducted into the Louisiana Sports Hall of Fame in Natchitoches in 1976.

Dr. Cannon passed away on May 20 of this year.

The Billy Cannon Statue ceremony, which will be attended by many dignitaries and members of the 1958 national championship team, begins at 6:30 p.m. on Friday, Sept. 28 with the unveiling set to take place at approximately 6:55 p.m.

The Billy Cannon Statue was made possible through donations made to the Tiger Athletic Foundation.