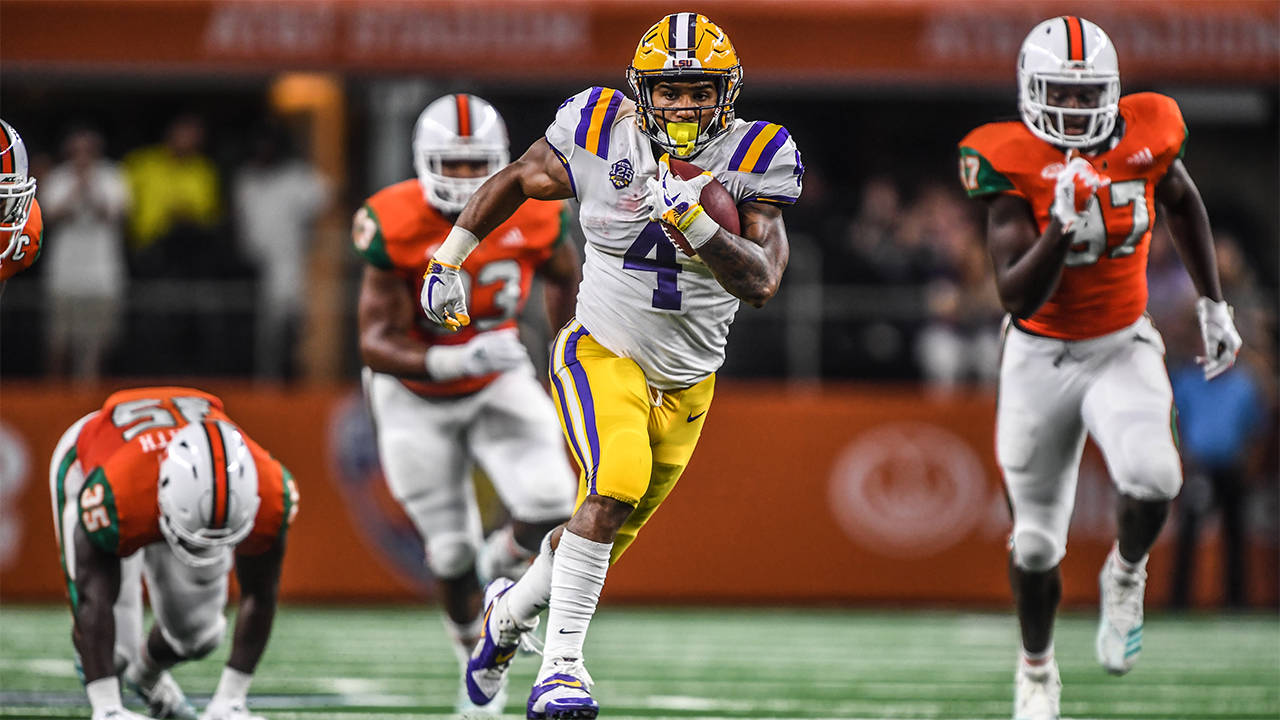 ARLINGTON, Texas — No. 25-ranked LSU took a commanding 27-3 halftime lead and cruised to its second Top-10 victory under head coach Ed Orgeron, 33-17 over No. 8 Miami on Sunday night in AT&T Stadium.

LSU (1-0), playing with 11 first-time starters, held the Hurricanes to 97 yards in the opening 30 minutes and led 33-3 entering the fourth quarter.

Just before halftime, LSU sophomore linebacker Jacob Phillips returned an interception 45 yards for a touchdown that put the Tigers in firm command of the contest. The Tigers, who committed a nation-best eight turnovers in 2017, continued to protect the football – and kept Miami’s “Turnover Chain” in its case.

After playing in the shadow of Leonard Fournette and Derrius Guice for the first three seasons in Baton Rouge, senior running back Nick Brossette earned his first 100-yard game including touchdown runs of 1 and 50 yards. The Baton Rouge native had 125 yards on 22 carries.

Another graduate transfer, senior Cole Tracy, made all four of his field goal attempts and tied a school record with a 54-yarder that skidded over the crossbar in the third quarter. Tracy also had makes from 43, 21 and 21 yards in his Division I debut.

Rozier led the Hurricanes with 259 passing yards but was pressured throughout the contest by the agressive LSU defense. Jeff Thomas caught a team-high five passes for 133 yards.

LSU returns to Tiger Stadium for its home opener on Saturday, Sept. 8, when Southeastern Louisiana comes to town. Kickoff is set for 6 p.m. CT on ESPN2 or ESPNU. Pregame on the LSU Sports Radio Network begins at 4 p.m.

Tickets to five of LSU’s home games are still available at www.LSUtix.net.

125 Seasons in 125 Seconds. This is the Glory of the Purple & Gold. This is LSU Football. pic.twitter.com/iEAIPZZ7ds

.@jacobphillips_1 is led by a caravan of Tigers into the endzone for a pick-6! @LSUTigersVoice #LSU pic.twitter.com/86qc6DV58w