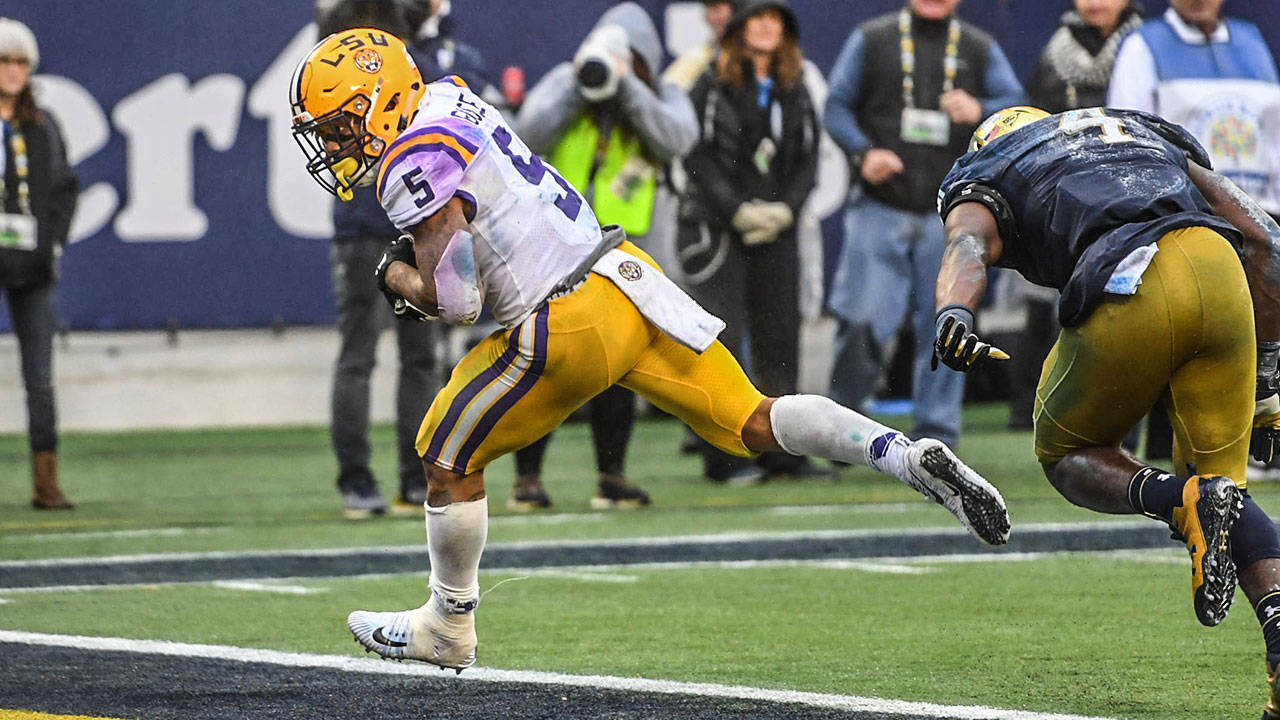 LSU running back Derrius Guice caught two touchdown passes, rushed 21 times for 98 yards and became the fifth Tiger to eclipse 3,000 career rushing yards. His final touch was a reception that came up inches from the goalline and led to a short field goal that put the Tigers ahead for 35 seconds of game time.

Notre Dame’s Miles Boykin made a stellar one-handed catch along the right sideline to score the go-ahead touchdown with 1:28 to play.

Notre Dame pulled starting quarterback Brandon Wimbush after his 3-for-8 start to the contest. Ian Book entered to complete 14-for-19 passes for 164 yards with an interception and two touchdowns. He also had seven rushes for 64 yards to overcome four sacks for minus-28.

Boykin, who was named the game’s MVP, led all receivers with 102 yards including the game-winner.

LSU won the coin toss and deferred its decision until the second half, and kicked off to the Irish.

Notre Dame started the game with a 35-yard pass from Wimbush to Equanimeous St. Brown, but passed up a long field goal attempt into the breeze in favor of a run into the teeth of the LSU defense that was stuffed for a loss or three yards.

Following the turnover on downs, Etling completed passes for 15 and 11 yards to Russell Gage and Stephen Sullivan to cross midfield. However, a false start on third-and-4 stalled the drive and Josh Growden‘s punt was downed at the Irish 2.

Notre Dame again crossed into LSU territory with a 31-yard run by Wimbush to the LSU 46. LSU’s defense sniffed out a throwback pass by tight end Cole Kmet and the Irish punted to the LSU 3.

Guice found a crease and ran 31 yards on first down to give the Tigers breathing room, but Etling’s third-down pass was off the mark and Zach Von Rosenberg entered to punt. Though he mishandled the snap, the 27-year-old redshirt freshman recovered and launched a 46-yard punt which bounded to the Irish 13.

From its 35, LSU started the second quarter with a 14-yard jet sweep by Gage and a 14-yard screen pass to tight end Foster Moreau to midfield. A first-down sneak by Etling kept the drive moving at the Notre Dame 23, and a 7-yard pass to Moreau on third-and-4 gave LSU first-and-goal at the 10.

Following an 8-yard run by Darrel Williams to the Irish 2, LSU was unable to score on runs by Williams and Etling. A false start on fourth-and-goal forced LSU to attempt a 22-yard field goal, which Connor Culp missed to the right.

LSU forced its third-straight three-and-out and took over at its 34 despite a muffed punt return by DJ Chark.

A 30-yard pass to wide receiver Dee Anderson on third-and-16 helped the Tigers overcome a sack and moved LSU into Notre Dame territory at the 42. Etling added a 23-yard pass to Chark on third-and-10, but Derek Dillon’s jet sweep was stopped for a 7-yard loss. Jack Gonsoulin‘s 37-yard field goal was missed to the left with 2:00 left in the half.

Notre Dame took advantage of the LSU mistake, overcoming sacks by Michael Divinity Jr. and Ed Alexander with a 21-yard scramble on third-and-17 by backup quarterback Ian Book. A third-down sack by LSU defensive tackle Greg Gilmore kept Notre Dame to a 46-yard field goal attempt by Justin Yoon which was true with four seconds left in the half.

Notre Dame took a 3-0 lead into the lockerroom.

A touchback by Notre Dame started the third quarter, and the Irish looked to have the Tigers off the field quickly. But, Von Rosenburg’s punt came up short and hit Notre Dame’s Isaiah Robertson in the leg. LSU deep snapper Blake Ferguson recovered at the Notre Dame 43.

Etling connected with Chark for a 13-yard first-down grab to the 26. On third-and-4 from the 20, Guice caught a middle screen from Etling and turned around to find only open space. The junior running back wasn’t touched until reaching paydirt, and LSU led 7-3 with 11:37 left in the third quarter.

Adams and Book led an 11-play Notre Dame drive into LSU territory, but LSU forced another turnover when Andraez Williams stepped in front of Book’s pass at the LSU 15 – his sixth interception of the season.

An illegal block on the return had LSU with its back to the goalline at its 8, and Von Rosenberg had to come back out to punt from his endzone. With a short field at the LSU 49, Book ran 15 yards for a first down and setup a 49-yard field goal by Yoon. Notre Dame cut LSU’s lead to 7-6 with 2:47 remaining in the quarter.

After switching ends of the field, Etling added passes for 12 and 8 yards to Chark before putting the ball in Guice’s hands to finish off the drive. Three Guice runs netted 11 yards to the 2, where the running back caught his second touchdown pass of the contest to give LSU a 14-6 lead with 11:13 left in the game.

Notre Dame again responded to LSU’s score, driving 75 yards in 10 plays to tie the game at 14-14 with a 6-yard touchdown pass from Book to Michael Young on third-and-goal. Book’s shuffle pass to Adams on the two-point conversion was initially ruled short of the endzone but overturned by video review.

After surviving a short kickoff that Clyde Edwards-Helaire had to field as he was being hit, LSU started a 12-play drive with a first-down run by Guice and a first-down catch of 13 yards to Sullivan to the LSU 48. Williams added a first-down run when taking a direct snap, and Etling connected with Moreau for 17 yards to setup first-and-goal at the Notre Dame 10.

Guice ran twice to the Irish 3 but came up inches short on a third-down pass.

Notre Dame scored the game-winning touchdown on a 55-yard reception by Boykin. The Irish wide receiver made a one-handed grab, eluded two LSU defenders and ran in for a touchdown with 1:28 to play.

LSU was able to pick up only one first down before turning the ball over on downs with 32 seconds to play.