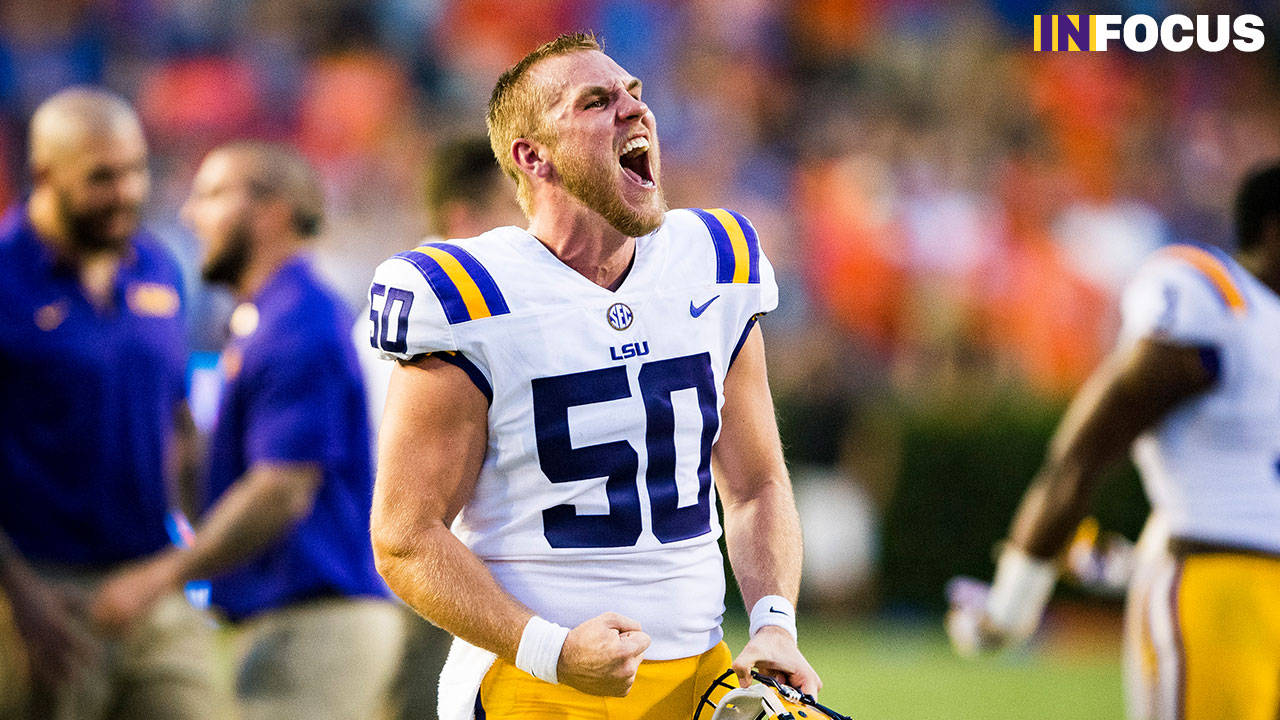 Three qualities one has to have to play football on the collegiate level and excel throughout life. Three qualities that are present in LSU long-snapper Blake Ferguson.

There is no one on the LSU sidelines with the energy and enthusiasm of Ferguson. No one has the ability that the special teams captain does to inject fire into a room quite like Ferguson. However, that doesn’t come without its challenges for the sophomore long snapper.

In January of 2011, Ferguson was at a Chris Rubio long snapping camp when he began feeling constantly parched, and it was noticeable that he had lost a significant amount of weight. However, he continued to give it 100 percent throughout the camp.

Upon his return to Buford, Georgia, Ferguson continued to not feel like his normal self, prompting his mother, Tracy to schedule a doctor’s appointment. The doctor requested bloodwork, and the next morning, the doctor called Tracy and told her that she needed to bring Blake in right away.

Immediately, they did another quick finger prick, and on January 25, 2011, Blake was diagnosed with Type I diabetes.

“I was so fascinated by Blake’s reaction,” Tracy said. “After he composed himself, he grabbed his phone and googled famous people with diabetes and said to me, ‘This is not going to define me, and I’m not going to use this as an excuse.’”

Today marks 6 years since I was diagnosed with Type 1 Diabetes. God has since blessed me with an amazing platform to spread awareness for this ugly disease. We will find a cure. #T1D

He was admitted into the hospital for a week, where he was able to learn what it meant to be a Type I diabetic and the different challenges and tasks that come with it, such as how to adapt to normal life, count carbs, prick his finger to check his blood sugar, draw insulin and give himself insulin shots.

Blake was the oldest patient in the hospital with Type I diabetes at 13. Most of the patients were between six and seven years old, as Type I diabetes has formerly been referred to as juvenile diabetes. Seeing all of the young children in there, Blake immediately took it as an opportunity to be a leader and uplift the other patients, jumpstarting his want to be an educator about Type I diabetes and an encouraging figure for those who have Type I diabetes.

During his week-long stay at the hospital, Blake was approached to do a study at Emory University searching for potential cures and treatments for Type I diabetes. He spent his spring break in the hospital, taking daily infusions of medication as he was tied to an IV for essentially the entire time he was there.

“It hurt him to smile,” Tracy explained. “The medications reset his immune system, and his body was at war with himself.”
For the next three or four months, Blake was on some pretty strong antibiotics because his immune system had been so severely suppressed.

However, that was not going to get in Blake’s way, and he was going to fight to continue what he loved doing most—playing football.

From the time his older brother, Reid, picked up long snapping, Blake immediately rose to the challenge and said, if he can do it, I can do it just as well as he can and maybe even better.

Students of renowned long snapping instructor Chris Rubio, Reid excelled and so did Blake. Reid earned a scholarship to LSU, which at the time was a rarity for a player who served strictly as a long snapper and enrolled early in spring 2012.

When Reid first signed with the Tigers, Blake knew that his day was going to come and that he would eventually don the Purple and Gold like his older brother.

In 2014, Blake was ranked as the No. 1 long snapper nationally by Scout and 247Sports and was the recipient of the Chris Rubio Award, which is given to the nation’s top high school long snapper in both his junior and senior years of high school. He paved his way to come to LSU.

Blake enrolled at LSU in 2015 and redshirted his freshman season while Reid finished his tenure with 497 total snaps between 2012-15.

“Having Type I diabetes shouldn’t hold you back from doing anything,” his father Kevin attested. “The technology is there. The treatment is there. Anyone who has it can lead a perfectly normal life. He’s able to manage it. You have to accept it and get past feeling sorry for yourself and just embrace your ability to control it. You control it, don’t let it control you.”

Each day, Blake has to check his blood sugar at least six to eight times. He wears an insulin pump that helps to regulate his blood sugar. He is also required to calculate his carbs and keep track of that energy and sugar that he is supplying his body. Should something go awry, he knows he will not be playing at the highest level.

Games are some of the biggest challenges for Blake, as adrenaline can affect blood sugar levels. However, with the help of modern technology, it has become easier to regulate. Blake wears a continuous glucose monitor, which allows others, including LSU nutritionist Lauren Reagan, to keep tabs on his blood sugar levels.

During games, he strives to make sure that he stays below 250 but admits that once the adrenaline kicks in, the two of them ensure that he takes a correction with his insulin pump or makes other adjustments to be able to play at the highest level.

“At the end of the day, I have to be in charge of my body first and supplying energy to the rest of the team and the sidelines second,” Blake said. “It’s a balance.”

Since his diagnosis, he has done work with the Juvenile Diabetes Research Foundation and served as an ambassador in 2015 and 2016 for Team Type I, which provided his availability to others with Type I diabetes who needed support and allowed him to share his story with others.

“The biggest thing that I encourage other Type I diabetics is to keep doing what you are doing. In the tough days when it does get hard, keep fighting and remember why you started doing it in the first place,” Blake said. “Diabetes has really been the motivation for me because now I have a platform where I can express motivation and encourage others to eventually get to the level I’m at and even above me one day.”

Blake took over long snapping duties in 2016, playing in all 12 games. He was true on every long snap for punts and placekicks during his first season of play and continues to dominate deep snaps in his second season with the Tigers.

The SEC Academic Honor Roll recipient has continued to make an impact for the Tigers this season, playing in all 11 games thus far, and he has had the honor of being named a team captain for two of LSU’s contests, a true testament to the hard work that he has put into long snapping along with being a leader and true team supporter while managing his diabetes.

“It’s a life-altering illness, but I tell my family and friends all of the time that I’m glad that it was Type I diabetes because it’s something that is controllable. I can continue to do what I love to do through it,” Blake added. “It’s not something that I’m going to let keep me off of the field.”