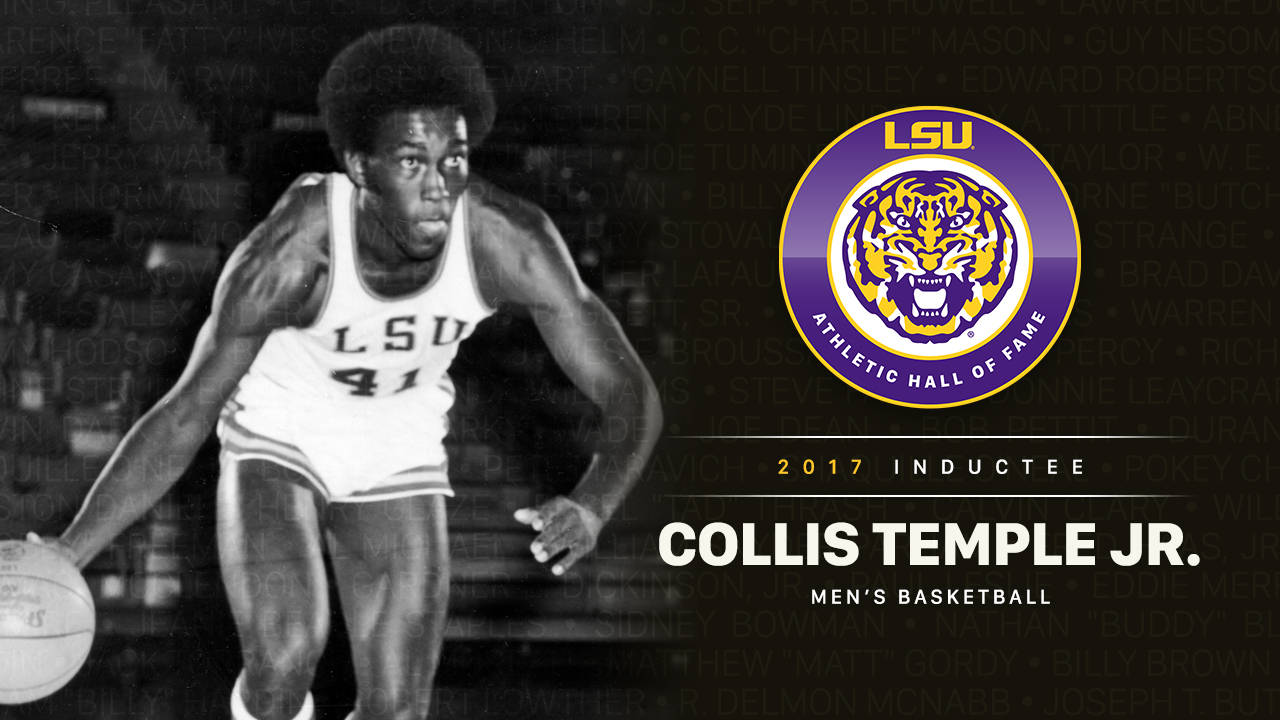 Tickets are on sale now for the event, which begins with a cocktail reception featuring heavy hors d’ouerves from 6 p.m. until 7:30 p.m., followed by the induction ceremony at 7:45 p.m. Tickets for the event are available for $50 each. Tickets may be purchased by contacting Courtney Albritton of the Tiger Athletic Foundation at (225) 578-0159 or courtneya@lsutaf.org.

I guess it was an easy choice when they walked over to my desk and said, “Why don’t you handle Collis Temple’s pre-event story for the LSU Hall of Fame?”

“Maybe put together one of your columns.” And I said, “Sure.”

I’ve been sitting at this basketball communications desk entering my 30th year at LSU, not counting a few in grad school, and if you know anything about LSU Basketball history, you know about Collis Temple Jr.

If you thought you knew something about LSU Basketball history, then you would have said, this story has been done. He went into LSU’s Hall a long time ago.

Uh, no somehow I promise to you, this will be his first induction into the LSU Athletic Hall of Fame on Friday night. There are all kind of awards and honors over the years, but somehow maybe a bunch of people like me thought he was already rightly in. Funny how that happens. After Friday night, all of us who thought Collis Temple Jr. was already in the LSU Hall of Fame, we’ll be right.

One thing I was fortunate to be around for was to be the communications director when both Collis Temple III and Garrett Temple played basketball for LSU. They were some magical years when the two of them were there, and while it didn’t quite rival some of Dale Brown‘s magic or The Pistol era, it proved that LSU basketball could win and win consistently and find its way back to the game’s mecca.

What I saw in CT III and Garrett Temple was obvious basketball skills (okay, we won’t start the debate as to which Temple is the best), but I also saw the best of Collis Temple Jr. and how he raised these two young men. They were polite. They were community-oriented. They knew they had a big opportunity, and there is no doubt in 2017 that they made the right decision following their Dad to LSU.

CT III played on a 2000 team that won the SEC and went to the NCAA Sweet 16. Garrett was on the 2006 team that as a freshman he helped lead to the conference title and the NCAA Final Four, and he then bookended his career by being on the 2009 SEC title team.

They had a work ethic that had to be a Temple trademark. They were going to work hard to succeed. There were no short cuts. Dad believed in that. He had the toughness to survive the cards dealt him that made him a good basketball player at a time when the Southeastern Conference was trying to figure out what to do with the African-American players who were being brought in to the league.

LSU had to come kicking and screaming as well, but they did and Temple was one of those who understood the trip wasn’t going to be easy, but had the smart brain and the thick skin to make it through and earn a degree from the university.

It seemed that CT III and Garrett were getting their degrees midway through their eligibility. It wasn’t quite that, but both played as graduate students in a day and age when graduate students are now known as graduate transfers after coming from different schools looking for a chance to play one more year.

No matter the hows, both Temples were making their Dad proud, and there was so much satisfaction when that 2006 team made its run. It was the first basketball season after Katrina, but more important was that Temple Jr. had his stamp on a group of kids that had been hanging around for years and years.

Whether by PA announcer Dan Borne’ in Baton Rouge, or when the lineups were introduced that year all over America, there was a repeat of the word Louisiana when the hometowns of the starters were announced, and most of the time it was Baton Rouge or Denham Springs in front of it. You had to go all the way to St. Martinville to find Darrel Mitchell.

The memories of all the battles of life and the game of basketball that Collis Temple Jr. had in his mind all those years were rewarded when LSU made the Final Four in 2006. In 2008, he saw the next step as LSU hired its first African-American head coach in basketball. In 2009, Temple Jr. was named to LSU’s 16-player All-Century team. The journey of life had come one full big circle of success for the game and in life.

Now Garrett represents the Temple game in the NBA. For his first few seasons, he took the tough way, picking up 10-day contracts here and there. One 10-day contract would lead to another and that would sometimes lead to a contract for the rest of the season.

Those 10-days led to the Washington Wizards giving him a multiple-year contract, and now all these years after winning a conference title at LSU, he is in the second year of a very strong three-year deal with the Sacramento Kings.

The NBA through Garrett is also learning the story of Collis Temple Jr. Rarely has the NBA done a salute that Garrett hasn’t been there front-and-center to tell the story of his father. Television networks and national writers are telling it again some 45 years after he signed with LSU and then Coach Press Maravich. Dale Brown would coach Collis Jr. in the days when his own career would flourish.

The Temple name has become a never-to-be-forgotten part of LSU athletics. Who knows the future? There are young Temples that may one day be ready to play some basketball and create their own legacy. One thing they will all know from this Friday night on: Collis Temple Jr., is a prized, welcomed and honored member of the LSU Athletic Hall of Fame.

Darius Days wants a taste of another championship. That’s how he started his career in 2018-19, as a key contributor to the regular season SEC champions and Sweet 16-bound Tigers. And after bypassing a shot at the NBA draft to return to Baton Rouge for one final campaign, that’s how he hopes finish it.
Skip To Main Content