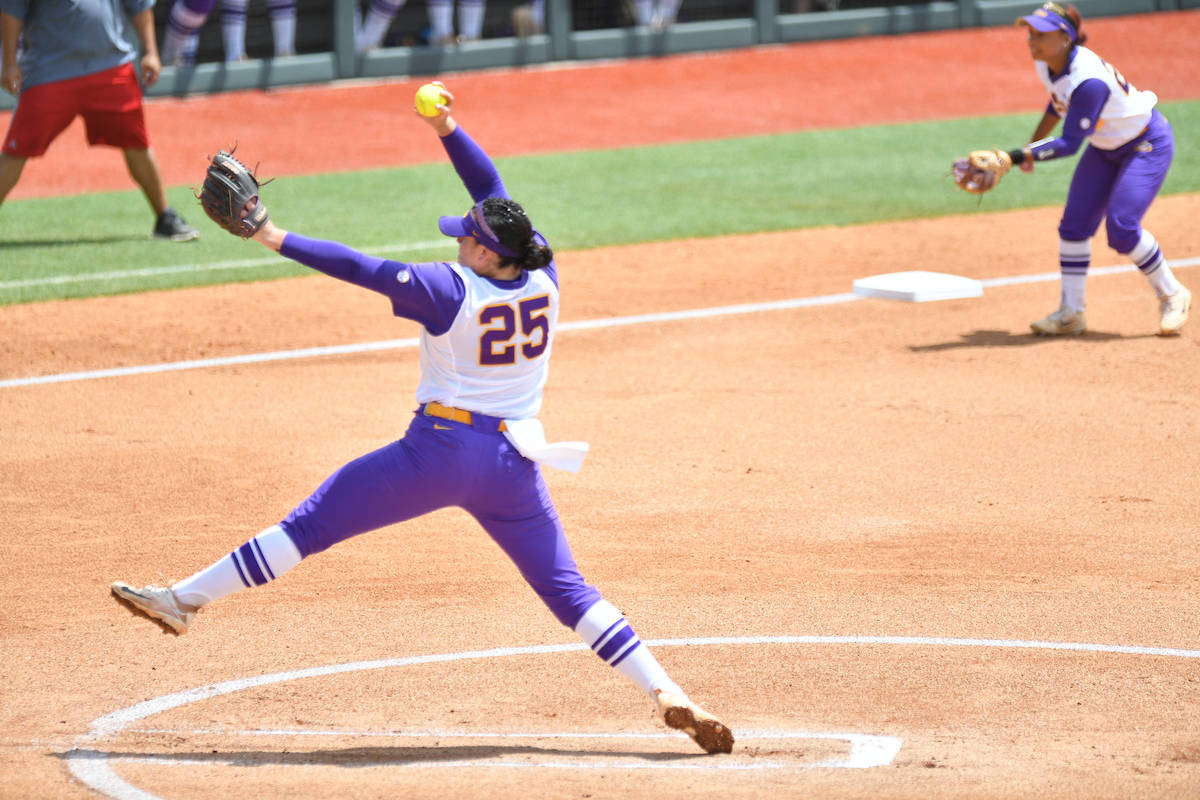 BATON ROUGE – The UL-Lafayette Ragin’ Cajuns exploded for a four-run fifth inning to snag the 4-2 win and take Game 3 of the Baton Rouge Regional from the No. 18 LSU Tigers Saturday night at Tiger Park.

LSU has fallen into the loser’s bracket and will face McNeese St. in game 5 of the regional at 1:30 p.m. CT Sunday.

UL-Lafayette has advanced to Sunday’s Game 6, which is slated to begin at 4 p.m. CT. If necessary, Game 7 will take place Monday at a time to be determined.

Right-hander Alex Stewart earned the win and improved to 27-3 on the season. The senior fired seven innings, limiting the Tigers to two runs on eight hits and struck out three.

LSU’s Allie Walljasper suffered the loss and dropped to 16-5. The right-hander threw a complete game and allowed four runs—three earned—on seven hits, walked one and struck out three.

“I liked our team’s effort tonight,” head coach Beth Torina said. “I thought they did a great job. There’s one pitch we would like to have back, but we believe in Allie (Walljasper) 100 percent. She did some good things, but our defense made too many mistakes and gave them too many extra opportunities to come to the plate.”

In the first at-bat after an extended weather delay in the bottom of the first, first baseman Amanda Doyle sent a ringing double to left field to drive in catcher Sahvanna Jaquish, who reached earlier in the inning on a double to left-center. LSU snagged the 1-0 lead.

With two outs and centerfielder Emily Griggs at first after a single up the middle earlier in the inning, senior right fielder Bailey Landry tripled to right-center to score Griggs and put the Tigers up 2-0 after three innings.

UL-Lafayette took the 4-2 lead in the fifth inning after third baseman Kara Gremillion and centerfielder Aleah Craighton led with back-to-back base hits to put runners on the corners for the Cajuns. In the next at-bat right fielder Haley Hayden sent a ball straight to the shortstop, who was unable to cleanly field it as Gremillion scored to cut the LSU lead to 2-1.

The Cajuns had runners on first and second when shortstop DJ Sanders sent a ball over the right field wall for a three-run home run to give UL-Lafayette the 4-2 advantage.

“Everything is still right in front of them,” Torina said. “Of course, we gave ourselves the harder road, but the hard is what makes this thing fun and I don’t think it’s a very good story if we just cruise through this thing. I think you become legendary and you leave your mark by doing things like this, so that’s the attitude we’re going to take. We’re going to show up and attack it tomorrow.”

There was a weather delay in the bottom of the first inning, which lasted one hour and 47 minutes. The game was resumed with Jaquish at second base and two outs.

After resuming play for 41 minutes, there was a second weather delay, which lasted four hours and 42 minutes. The game was resumed at the beginning of the fourth inning. Both delays combined to last for a total of 6 hours and 29 minutes.