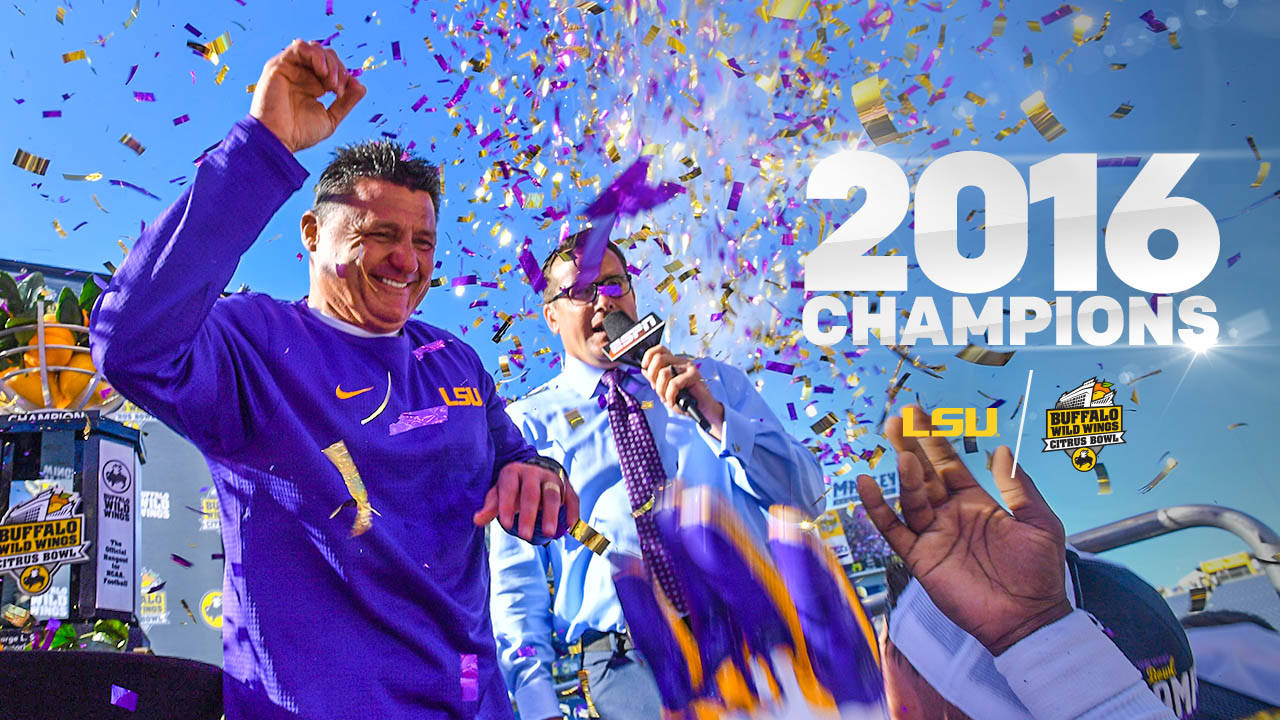 ORLANDO, Fla. — No. 19 LSU had eight sacks and held Heisman Trophy winner Lamar Jackson without a touchdown for the first time in 17 games, as the Tigers beat Louisville in the 2016 Buffalo Wild Wings Citrus Bowl, 29-9, Saturday in Camping World Stadium.

Offensively, LSU (8-4) was led by sophomore running and game MVP Derrius Guice, who ran for 138 yards with a 70-yard touchdown rushing and a 1-yard touchdown catch. The powerful back passed three more Tigers on the school’s career rushing list into 17th place (1,823), while becoming the fourth LSU back to surpass 1,300 yards in a single season (1,387).

Quarterback Danny Etling continued to manage the game well for LSU, completing 16-of-29 passes for 217 yards with two touchdowns. His favorite traget was junior receiver Malachi Dupre, who had a career-high 139 yards on seven catches.

Defensive end Tashawn Bower led the way with three sacks, while senior linebacker Duke Riley had a team-high eight tackles with a fumble recovery while wearing No. 4 as a tribute to fallen mentor Joe McKnight.

With two today, linebacker Arden Key established the LSU single-season sack record at 12. He passed Gabe Northern’s 1994 record of 11 in the opening seconds on the second half.

LSU head coach Ed Orgeron, who took over as interim coach four games into the 2016 season, finished 6-2 and won his first bowl game as a head coach.

LSU won the coin toss and elected to receive the opening kickoff. The Tigers immediately tested the Louisville secondary with a 36-yard pass from Etling to Dupre to the Cardinals 37. Following a first-down run by Guice, a pair of incomplete passes and a missed 39-yard field goal try by Colby Delahoussaye left the Tigers wanting.

Louisville earned a first down with a 12-yard run, but would find tough sledding for the rest of the half. Tre’Davious White lost Mason King’s 58-yard punt in the sun, and it was downed at the LSU 5.

Following a three-and-out by the Tigers, Louisville earned 53 of its 62 net first-half yards on a catch to the LSU 9 by James Quick from Jackson. The Tigers defense allowed only two more yards, and Louisville took a 3-0 lead with a 24-yard field goal by Blanton Creque with 7:14 left in the first quarter.

Etling completed a 26-yard pass to Dupre, but took a 15-yard sack and quickly punted back to Louisville. The Tigers returned the favor, as freshman linebacker Devin White sacked White for a loss of 19 yards to the Cardinals 6. Two plays later, King punted 50 yards to Tre’ White, who returned 12 yards to the LSU 48.

An 18-yard catch-and-run by Dupre moved LSU into Cardinals territory, and Guice ran for 12 yards on third-and-5 to the Louisville 4.

On the first play of the quarter, Etling faked a handoff to Guice and found tight end Colin Jeter wide open in the endzone for his second career TD. LSU took a 7-3 lead with 14:54 remaining in the half.

A sack of Jackson on third-and-3 by LSU defensive end Tashawn Bower forced another King punt.

LSU took over on its 21 and began a 13-play, 79-yard scoring drive that culminated in a 1-yard touchdown reception by Guice – the first of his LSU career. LSU led 14-3 with 7:14 to play in the half. Dupre had a 29-yard reception while Chark added a 39-yard catch to the Cardinals 2 to setup the score.

LSU’s defense sacked Jackson again, forcing another three-and-out. This time, Bower earned his second sack of the game on first down, resulting in a 7-yard loss.

Though the Tigers punted back without gaining a first down, the defense came back and sacked Jackson once again. Freshman defensive tackle Rashard Lawrence was credited with the first sack of his career.

After an LSU punt, Louisville took over at its 9. On third-and-10, Jackson was sacked for the fifth-straight drive – this resulting in a safety when Arden Key burned the edge and caught him in the endzone for a 9-yard loss.

With 1:08 left in the half, LSU led 16-3 following its fifth-straight drive that included a sack and three-and-out.

Following an interception on a pass Etling intended on throwing away, Louisville managed to tack on a 47-yard field goal as time expired for the half.

Louisville’s second half started with the same theme as the first: a record-setting LSU sack by Key – his 12th of the season – and a punt.

Later in the quarter, Guice gained 12 yards and a first down before taking it the house for a 70-yard touchdown. With 8:48 remaining in the third quarter, LSU led 23-6.

LSU started its ensuing drive at its 40 following another Louisville three-and-out. With help from a personal foul, the Tigers drove to the Cardinals 25 where Delahoussaye hit a 42-yard field goal that pushed the LSU advantage to 26-6 with 3:04 left in the quarter.

Louisville managed its best drive of the game to the LSU 2, but a sack of Jackson by Bower stalled the drive. Louisville turned the ball over on downs at the LSU 5.

Congratulations to @Coach_EdOrgeron on his first career bowl victory as head coach! Tiger fans are looking forward to many more. #ForeverLSU pic.twitter.com/KwYRZfZCpN

LSU has been dominant when facing Heisman Trophy winners in bowl games. The Tigers continued that trend today. pic.twitter.com/HATiW1vJoE

Sophomore @ArdenKey49 has set the school record for sacks in a season! pic.twitter.com/2JF23ijIvM