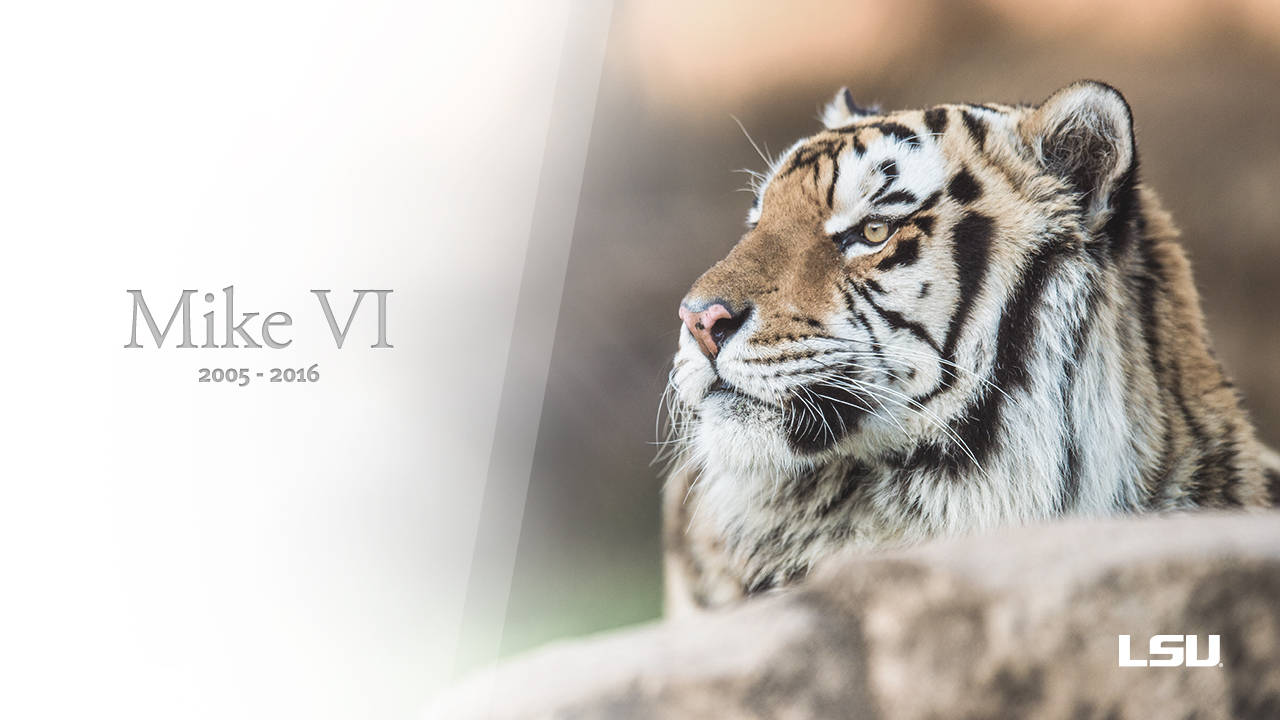 The announcement came from the primary caretakers of Mike VI, the LSU School of Veterinary Medicine on the Baton Rouge, Louisiana, campus.

Mike VI was diagnosed in late May 2016 with a spindle cell sarcoma, a type of cancer. On June 1, he was anesthetized and taken to Mary Bird Perkins – Our Lady of the Lake Cancer Center for stereotactic radiotherapy, or SRT, which delivered a precise, concentrated dose of radiation to Mike’s cancer. The radiation dose was delivered in a single treatment and optimized to avoid normal tissues surrounding Mike’s cancer in order to reduce the risk complications.

On Oct. 3, Mike was taken to the Vet School for further observation and two days later it was announced that the cancer had returned and spread. The Tiger was returned to his habitat and spent much of his last week outside. Tiger fans came to offer flowers and notes and take pictures outside the cage with Mike VI before he was moved to “hospice care” for the remainder of his time.

Mike VI, one of only two live tiger college mascots in the United States, was born on July 23, 2005, and came to LSU as a 2-year-old. At the time of his arrival, he weighed about 320 pounds and put on some 100 pounds during his years in the habitat.

Mike VI was donated by “Great Cats of Indiana,” a nonprofit sanctuary and rescue facility for big cats and other large carnivores, located in Idaville, Ind. He was separated from his mother at two weeks old. He was first moved into the indoor portion of the habitat on Aug. 25, 2007, and was introduced to the LSU community on Sept. 1, 2007.

He was known as “Roscoe” at the sanctuary in Indiana, but was officially christened “Mike VI” in a Sept. 14, 2007, ceremony. He debuted in Tiger Stadium on the evening of the LSU-Florida game on Saturday, Oct. 6, of that year.

Mike VI was the first LSU mascot to have the use of new LSU Tiger Habitat, which was completed in August 2005, from his arrival until his departure. The habitat incorporates natural substrates, including grass, and also includes elements of LSU’s renaissance architecture and facts educating Mike’s visitors on the live subspecies of tigers. Mike’s yard encompasses 14,010 square feet (including his night house, 15,105).

Mike VI had a personal veterinarian from the LSU School of Veterinary Medicine, Dr. David Baker, who was in charge of his overall healthcare and well-being. Besides Dr. Baker, there have been numerous other specialists at the veterinary school available to assist with the specialized healthcare that Mike has needed. Mike’s daily care has been provided by two veterinary students. These students work with Mike in two year rotations until they graduate.

Mike VI had a diet of some 20 pounds of food daily. His food was a formulated zoo carnivore diet, the same commercial food used for most of the large cats at the zoo. It consists of beef and all the necessary vitamins and minerals to maintain Mike’s needs. It also allowed his student handlers to give him his meal designed during football season in the shape of the opponent or in spellings of words like “LSU” or “Beat Bama.”

The tradition of the live Bengal Tiger started when the original Mike was purchased form the Little Rock Zoo in 1936 for $750 with money contributed by the student body. Originally known as “Sheik” at the time of his purchase, his named was changed to Mike to honor Mike Chambers who served as LSU’s athletic trainer when the first mascot was purchased.

Chambers was inducted into the LSU Athletic Hall of Fame in 2015.

Dr. Baker has already begun a search for a young Tiger cub that can be brought to LSU to become Mike VII.

According to the University announcement, there will not be a formal memorial service for Mike VI, but fans are encouraged to share their memories, stories and photos on social media using #MikeVI.

We encourage everyone to share their favorite photos, memories and stories of Mike on social media using #MikeVI pic.twitter.com/vdltEHH8yQ

We are deeply saddened to have lost our beloved live Tiger mascot, @miketigervi, after a 4-month battle with cancer.