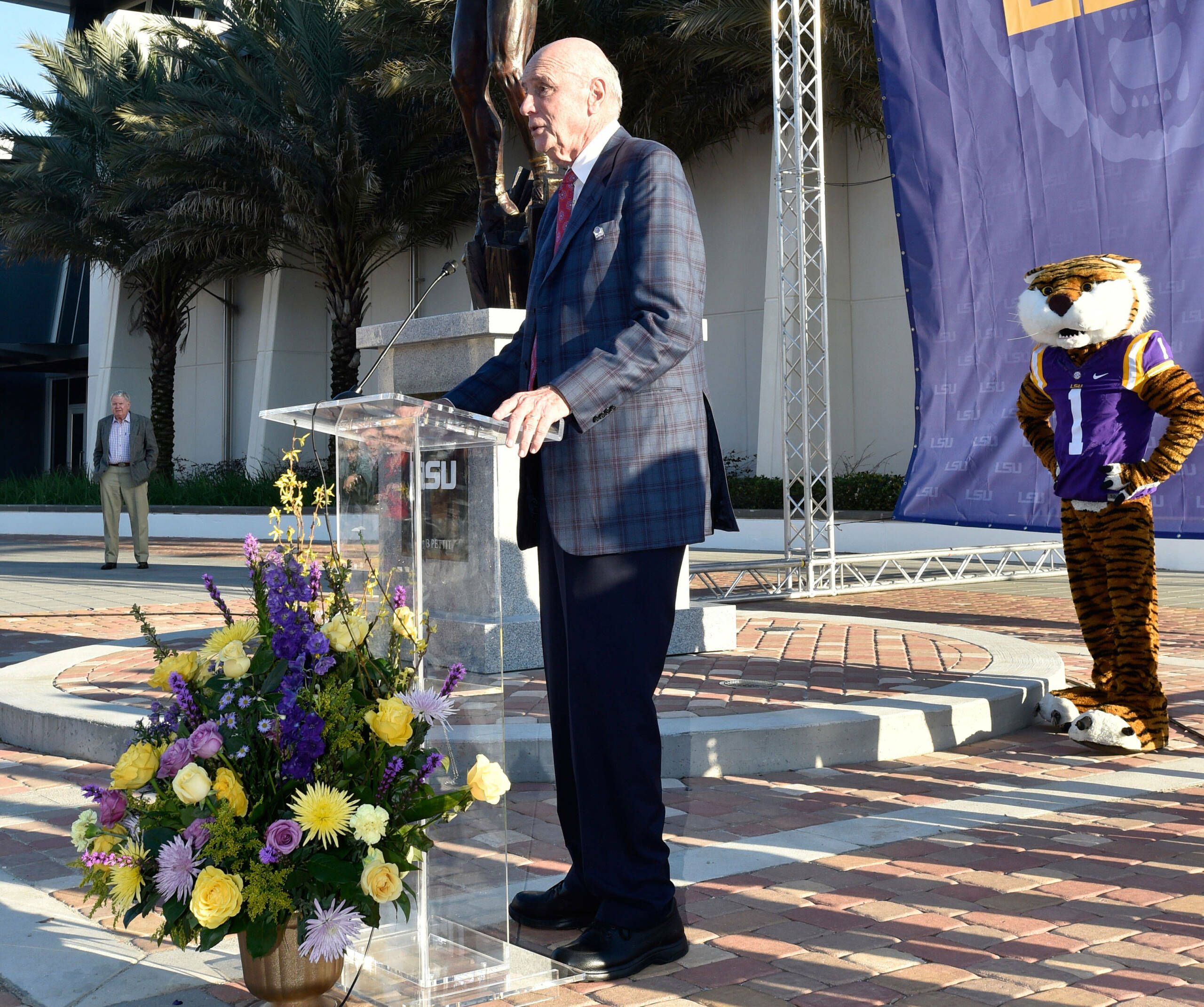 BATON ROUGE – LSU and NBA icon Bob Pettit and his 10 grandchildren pulled the large tarp away to unveil his likeness in ceremonies Saturday afternoon prior to the start of Saturday’s Florida-LSU basketball game.

The statue is located on the plaza on the north end of the Pete Maravich Assembly Center outside the practice facility and adjacent to the Shaquille O’Neal statue erected in 2011.

Lowe on Bob Pettit | Pettit by the Numbers

Following the unveiling, Pettit, who will speak at the Tipoff Luncheon at L’Auberge Hotel and Casino Monday at the Bon Temps Buffet, met with the media following the ceremony and here were some of his remarks:

On his thoughts on the statue…
“I like it very much. I wish I had that many muscles and that much hair, but I thought it was a great job. I really appreciated it. It’s just hard to realize at this time how significant that is in my life. I’ve had quite a few honors over the years, but I don’t think there’s really anything that compares to this. I’m very excited and very appreciative of all the people that were involved in this and in making it happen and particularly the LSU family. They’ve been terrific, and I couldn’t ask for anything more. (There’s) beautiful weather. It couldn’t be much nicer than this. “

On if he ever thought LSU would put up a statue in his honor…
“No indeed. I never dreamed in my wildest dreams that something like that would happen. I have found in my life and probably in other people’s lives as well, as you start something, you set a goal for yourself. You reach that goal and then you ratchet up that goal up to another level. If you reach that, you ratchet it up again, but from down here, you never realize where you’re going. As I said outside (at the unveiling), my ambition as a sophomore in high school, when I got cut from the team, was to win a letter by the time I was a senior. That’s all I wanted was to win a letter, and here I am this many years later with a statue next to Shaquille O’Neal…I’m very flattered. Did I ever dream it? No.

On story he told outside how a play was designed with Bob as a decoy and when they came out the player said get ready ball was coming to him:
“I played with a guy that I loved. He was a wonderful player and a dear friend. He was 5’10” and 165 pounds but tough as a boot. When trouble started, I wanted him on my side. He was our guard Slater Martin. He didn’t care what the coach said. He didn’t care what play the coach set up. He was coming to me, and he told me that. He said ‘It’s coming to you. I don’t care what he says. You’re going to get the ball to take the shot.’ I don’t remember the game. It was in St. Louis. It had to be before 1960, so it was probably in ’57, ’58, or ’59. He just said ‘It’s coming to you’, and he brought it to me. I think I made (the shot). There was so much pressure on me.”

On what makes the LSU basketball fraternity so special…
“I don’t know if I can answer that. Some of these guys like (guard) Kenny Bridges came from Lawton, Oklahoma. (Guard) Don Loughmiller came from Indiana and (center/forward) Bob Freshley came here. We had a great relationship, and we had a good team. We played well together, and we bonded together. There was no dissension of any kind, and we stayed in touch over the years. (Forward) Ned Clark is kind of the guy that keeps us all together and keeps us in touch with each other. When you ask them to come, they’re here like today. It’s very flattering to think that these guys came this far to be a part of the ceremony for me today, and I’m forever grateful to them.”

On his interaction with Shaquille O’Neal over the years…
“Well, I have not interacted with him a great deal, but I think he’s absolutely great. I love to watch him. He’s charming and he’s funny. He’s not only a great athlete, but he just bubbles with personality, and I really enjoy him. I was with him at All-Star game in Atlanta, and he walked up to me and said in a really soft voice, ‘Mr. Pettit, you know somebody told me in the Top 50 (players) in the history of the NBA, there were only three players from one team: North Carolina. They were wrong, because LSU had you, me and Pete Maravich.’ I said that’s exactly right. That was one interaction with him, and then I went down and spoke to him a couple of times at a football game when he was walking the stadium you know how he does. I saw him at Dale Brown‘s dedication for that basketball floor we had out at L’Auberge. I have not been around him a lot, but when I have been around him, I thoroughly enjoy him. I think he’s a great ambassador for LSU and for all of basketball. I’m a fan. I’m a fan of Shaquille O’Neal, and I really like the way he handles himself. He’s not only a good basketball player, but he seems like an awfully nice person.”

On there was any truth behind Oscar Robertson saying that you knew what you could do and what you couldn’t do…
“Yeah I think that’s pretty true. I scored well. I averaged over 26 points a game. I went in the fifties (points) five, six or seven times in my career. I think what I did best was rebound. To toot my own horn, I think I’m the third leading rebounder in the history of the league in rebounds per game. Number one would be (Wilt) Chamberlain or Bill Russell. Number two would be Bill Russell or Chamberlain. They averaged 20, 21 or 22 rebounds a game for their career. I averaged a little between 16 and 17 rebounds a game, and I think that’s still the third best average for a guy that’s played ten years or something in the league, so I went to that. If things got tough and I wasn’t hitting the jump shot, I went harder than ever to go to the board, and I went hard to start with. I scored six or eight points a game off the offensive board (by) pushing, shoving, hitting, clawing and scratching. (It was) whatever it took to get the ball and put it back in and get fouled. I think I realized if my jump shot was hitting I was going to have a big night. I was still going to get those seven or eight points off the offensive board and shoot ten free throws. I knew what I did. I was very aware of my abilities and very aware of my limitations. I did everything I could.

“The year we talked about in 1956, I was voted the MVP of the league and led the league in scoring and rebounding. That’s a pretty good year for your second or third year in the NBA, but I came home and said ‘What can I do to get better?’ I need strength, and I need to be stronger with all the pushing and shoving under that backboard. I went to see if y’all remember Alvin Roy. I went to see Alvin Roy right here over on Oklahoma Street. I said, ‘Alvin, I got to get stronger. Can you help me?’ He said, ‘I’m the man. I can help you. I would never make you to where you get muscles that would hurt or hinder you.’ The owner felt that if I lifted weights you would get muscle bound. You know I can’t get muscle bound. I mean was a skinny rail to start with. I put on over the next three years 30 or 35 pounds, and it made a difference psychologically. I was always striving to get better, and I think that was an advantage. I never was happy, and I was never satisfied. I always felt I could get better. One summer I worked on shooting free throws and just free throws. It was the difference between shooting 70% and 80% when you shot as many as I did. I was always trying to get better, and I realized very well how good I was and how good I wasn’t and where I needed to improve.”