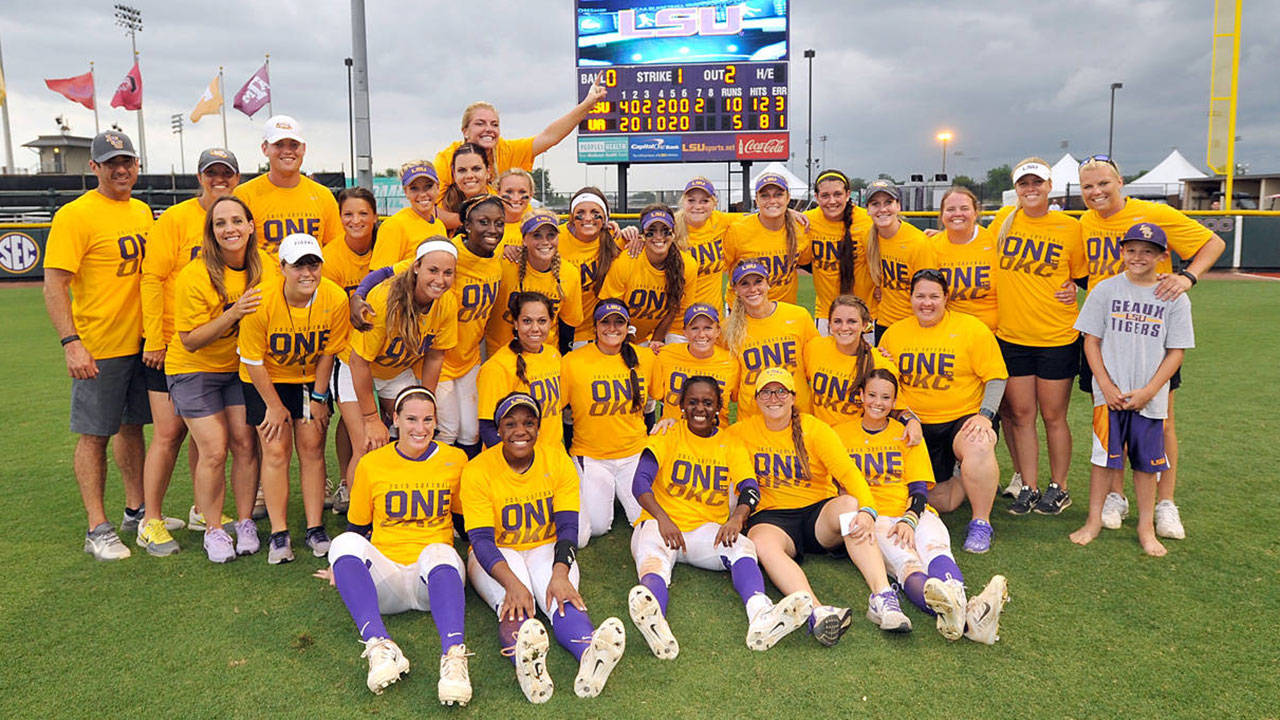 BATON ROUGE, La. – The No 8 LSU softball team rode a four-run first en-route to scoring double-digits, while fending off multiple rallies by the No. 16 Arizona Wildcats in a 10-5 win to secure the program’s fourth berth in the Women’s College World Series which begins on Thursday in Oklahoma City.

With the victory, the Tigers (50-12) will now move on to play the Auburn Tigers at 1:30 p.m. CT Thursday at ASA Hall of Fame Stadium – OGE Energy Field, earning a trip to the pinnacle of collegiate softball for the first time since 2012, claiming the very last spot in the field. The team is going for the second time under head coach Beth Torina, winning the most games of any of her four seasons at the helm.

“I feel like starting back in the fall this team was on a mission. They worked so hard, and they truly earned this moment today,” Torina said. “If they had won or lost, I still would have been so proud to be the coach of this team. I truly have enjoyed every minute with these girls this year. It has flown by because of how much I’ve enjoyed it, and I’m just so proud to be their coach today.”

LSU pounded out all 10 runs on 12 hits in the contest, getting the timely hits that the squad was known for early in the season, while holding Arizona (41-20) to five runs on eight hits. The Wildcats put together multiple scoring opportunities, stranding eight runners on base in the contest, but the, now, record postseason crowd of 2,968 was engaged from the start and never let up on the visitors.

Junior infielder Sandra Simmons led LSU at the plate, going 3-for-3 and tying for the program postseason record in RBIs with five. The Fountain Valley, California, native helped spark the Tiger offense with a home run and a triple among her three hits, scoring three times while being named the MVP of the Baton Rouge Super Regional.

“It’s exciting. I couldn’t be more thankful to have the group of girls that we have and the coaching staff and just the support staff. Today, I think we came out with a different energy and it was amazing,” Simmons said. “Everything was done through teammates, through positive energy, through encouragement and just being uplifting knowing that we were going to win this game today. Defense was great, hitting was great and just having people be able to get on and execute and hitting in runs like we needed to was amazing.”

She was one of three players to finish with multiple hits, as Constance Quinn went 2-for-3 with a double, three RBIs and a run scored, while A.J. Andrews in her final game at home in Tiger Park went 2-for-5 with a run scored and two stolen bases.

In one of the biggest spots in her young career, freshman pitcher Allie Walljasper (15-5) earned the starts and earned the win pitching 4.1 innings allowing five runs, two earned, on five hits with three walks, while Carley Hoover (4) earned the save in relief after earning the shutout yesterday by giving up three hits with three strikeouts to close out the game.

“I couldn’t have done it without my team behind me the whole time,” Walljasper said. “They were backing me up through the whole game, and it was very exciting to see the outcome of the game. We all deserved it, and it was really cool to see.”

Michelle Floyd (19-13) suffered the loss for the Wildcats, pitching three innings and allowing six runs on five hits with four walks and a strikeout, as reliever Trish Parks pitched the final four innings and gave up four runs on seven hits with a walk and a strikeout. Leadoff batter Hallie Wilson led Arizona at the plate going 3-for-4, while Katiyana Mauga and Chelsea Goodacre each drove in two RBIs

As the designated visitors for this game, LSU batted first and after a fly out a bunt single by Bailey Landry put the first runner on base for the contest. After that, consecutive walks to Bianka Bell and Sahvanna Jaquish loaded the bases for the Tigers to put pressure on the Wildcats early.

With the tension growing, an infield popup put LSU on the brink of coming up fruitless, until Simmons came through and dropped one to the short porch in left to drive in two to make it 2-0 LSU with runners now at second and third. Instead of looking like it would be a wasted inning, Quinn came through next and roped a double to the gap in right to drive in two more to make it 4-0 Tigers.

Arizona came back in the bottom half of the inning and got a single, before a throwing error put two in scoring position for the Wildcats quickly. A walk loaded the bases for Arizona, as an infield grounder and sacrifice fly scored two runs to cut the deficit to 4-2. A single to center put two back into scoring position for UA and charging, but an infield popup ended the inning.

With one out in the bottom half of that same inning, a triple to right center put on for Wildcats, as an error at short allowed the run to score making it 6-3, before Landry pulled off her second double play of the weekend to end the frame.

A single by Andrews to right put one on for LSU, as she quickly stole second to get into scoring position. A walk to Landry put two on, as Bell hit a high-chopping single up the middle to plate Andrews making it 7-3 Tigers. After a strikeout, Landry avoided a tag on a Kellsi Kloss fielder’s choice to load the bases for the Tigers, setting up a Simmons sacrifice fly to score Landry from third to make it 8-3.

Arizona put together its best inning since the opening frame, as back-to-back singles put runners at the corners for the Wildcats. An error on a sacrifice bunt loaded the bases and a run would score on the next play due to a walk to make it 8-4. LSU got the first out on a force play at home, but another walk made it 8-5 as Hoover came on in relief.

The switch worked as Hoover came on in one of the biggest spots of LSU’s season and got consecutive strikeouts to stop the leak and end the inning.

After an Arizona threat was again snuffed in the bottom of the sixth, LSU took to the final top half frame and got a lead-off triple from Simmons to open the seventh. A double by Quinn scored her easily to make it 9-5. Dylan Supak came in to bat in the senior’s swan song at Tiger Park to pinch hit and laced a single up the middle to score Quinn making it 10-5.

In the final half inning, a fly out to left and a grounder to first put Arizona on the brink. A double to left put a runner on for the Wildcats, but a high fly ball that Griggs got under clinched the Super Regional, sending LSU to Oklahoma City.

“I think this team truly understands the team concept. Everybody has a role, and they play it to the absolute to the best of their ability,” Torina said. “There are never any hard feelings or selfishness with this group. They are just so selfless with whatever we ask them to do. If we ask them to hit in the three hole or pitch or stand in the dugout and cheer, they’re going to do it to the absolute best of their ability. They’ve done it all year long, and that’s truly the reason why we’re playing in this final week of the year.”