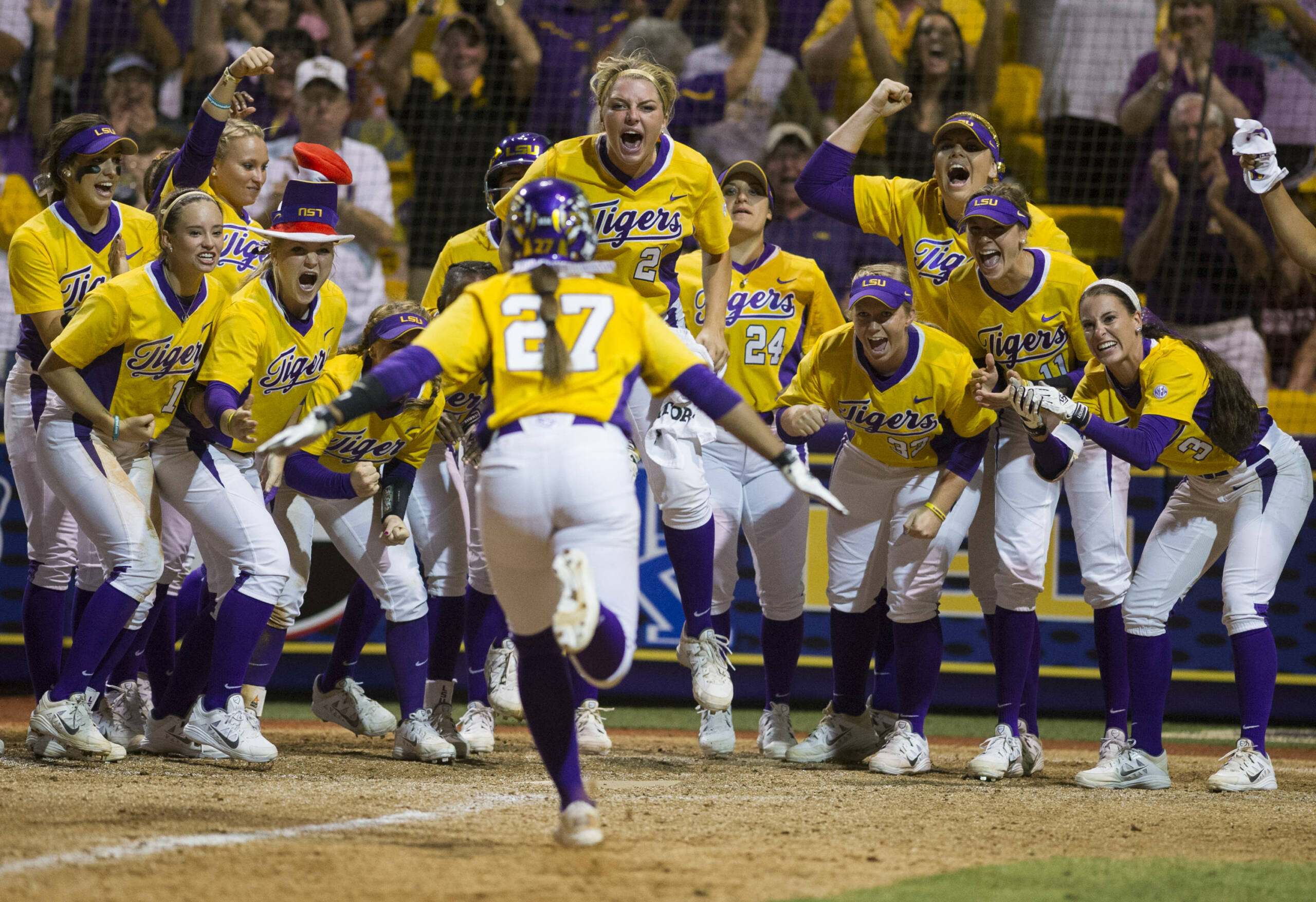 BATON ROUGE, La. – In a thrilling opening game featuring a very live crowd, the No. 8 LSU softball team began play in the 2015 Southeastern Conference Softball Tournament as the fourth seed, and while looking to make a run the Tigers would be unable to hold on to leads at two separate points in falling to No. 11 Tennessee 7-5 Thursday night in Baton Rouge.

With the loss LSU drops to 44-11 on the season, knocking the team out of the event, while Tennessee improves to 41-13 and will move on as the five seed to Friday and take on No. 2 and top-seeded Florida in the semifinals.

Bianka Bell led the Tigers at the plate, going 2-for-4 and hitting her 16th home run of the season and 19th double of the year with two RBIs and a run scored, while Emily Griggs went 2-for-4 and 3-for-4 with an RBI each. Constance Quinn went 1-for-2 with an RBI and two runs scored to round out the LSU hitting contingent.

“I thought we played well. Things just didn’t go our way in the end,” Bell said. “We just couldn’t execute at the end of the game. I just wish we could have found a way to get runners on-base and execute towards the end.”

Allie Walljasper (13-5) suffered the loss after coming on in relief, allowing four runs on five hits with four strikeouts in the final 2.1 innings of work, while starter Carley Hoover pitched 4.2 and allowed three runs on six hits with two walks and two strikeouts.

Tennessee used four pitchers on the night, as in the end Rainey Gaffin (14-2) was the final Lady Vol hurler used as she tossed the final 2.1 innings and allowed just one hit with three strikeouts and two walks. There were a combined total of 18 hits in the contest and UT had 11 of them, including hitting three home runs among six total extra-base hits in the win.

In the first at-bat for LSU in the tournament, A.J. Andrews drew a walk in the bottom of the first to reach first. She advanced on the next play coming from a sacrifice bunt for the first out, eventually motoring home after a wall-banging double to left from Bell to give LSU the early 1-0 lead. A groundout kept Bell at second for the second out, as Kellsi Kloss was walked to put two on for the Tigers, but both would be left stranded after a fly ball out to right to end the inning.

Another leadoff walk to open the second, this time to Quinn, put another runner on base for LSU, as Bourg advanced her to second on a sacrifice bunt to third for the first out. After moving to third after a wild pitch, Griggs ripped a shot to left to easily score the LSU designated player to make it 2-0 LSU.

One ball into Andrews’ second at-bat of the game Tennessee made a pitching change, as the result didn’t change much as she was walked on four pitches to put two on for the Tigers. Griggs was forced out at third after a Bailey Landry fielder’s choice for the second out, as a strikeout inside ended the inning for LSU.

After getting the first two batters to ground out to third for the first two outs, Tennessee cut the deficit in half with one swing of the bat as Meghan Gregg launched one to dead center, but that wouldn’t be the end of it as a single and another home run, this time from Taylor Koenig to dead center again gave the Lady Vols its first lead up 3-2 in the top of the fourth.

With an out in the bottom half of that inning, Bourg lifted a single to right center to reach first, with Griggs hitting a shallow fly that should have been caught but was dropped for an error to put two on with just one out. Unfortunately, a strikeout and a fly out to short ended the threat for LSU.

After getting the first two outs in the top of the fifth, a single to left ended the night for Hoover, giving way to Walljasper.

Hoping not to go a third inning without trying to find an equalizer, Bell took the first swing of her at-bat in the bottom half of that same frame to tie things up, blasting one to left over the berm to knot the game at 3-3. After a strikeout, Kloss drew a walk as Taylor Lockwood came on to pinch run for the catcher. She advanced to second after Tennessee’s third pitching change of the game on a wild pitch, as Sandra Simmons drew a walk to put two on.

With a chance to strike, Quinn hit a low screamer on the dirt through the infield to easily score Lockwood, as the throw in from center sailed, but ricocheted back far enough to put out Simmons at home as Quinn moved up on the errant throw. In her second at-bat, Bourg came through again sending one up the middle to score Quinn to make it 5-3.

The insurance runs helped, but the lead wouldn’t last long as with two runners on after an out, a deep enough fly to center allowed both runners to tag up to put two in scoring position with a follow up double tying the game and another after that giving the Lady Vols the lead back at 6-5.

Tennessee added another insurance run thanks to a home run, this time coming from Megan Geer to give the Lady Vols a 7-5 lead in the top of the seventh.

“There’s no place like Tiger Park. Our fans are always great,” Griggs said. “We appreciate them coming out even though the rain pushed us back a little bit. They were awesome tonight, and every night.”

The Tigers will now await their tournament fate, as the NCAA Softball Selection Show will air at 9 p.m. CT on ESPNU, where the regional hosts will be announced as well as the eight national seeds.