No. 9 Georgia Knocks Off No. 6 LSU in Shootout 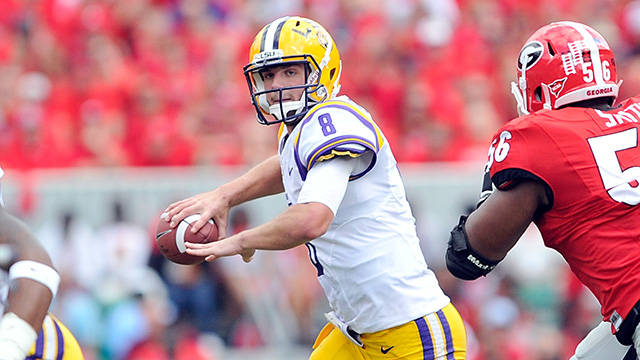 ATHENS, Ga. — Fans in Sanford Stadium and watching on CBS around the country were treated to one of the most entertaining games in series history, as the sixth-ranked LSU football team came up short of ninth-ranked Georgia on Saturday, 44-41.

Georgia quarterback Aaron Murray engineered a six-play, 75-yard touchdown with 1:47 to play that proved the difference.

LSU quarterback Zach Mettenberger made plays throughout the game but couldn’t advance past his 35 on the final drive after suffering a sack for the fourth time on the afternoon. Coming back to where he started his college career, Mettenberger out-did Murray on the stat sheet, completing 23-of-37 passes for a career-best 372 yards and three touchdowns.

Murray, who wasn’t sacked, was 20 of 34 for 298 yards with four touchdowns and an interception that led to an LSU touchdown.

With the game tied 27-27 in the third quarter, LSU looked to take momentum after wide receiver Jarvis Landry caught a 39-yard touchdown and the LSU defense was able to stop Murray in his own territory. But, punt returner Odell Beckham Jr. muffed the punt at the LSU 20 and Georgia quickly took a 34-27 lead.

The Tigers recovered to score twice and retake the lead for the first time since the first quarter, 41-37, with 4:14 to play before Murray led the game-winning drive.

LSU, which still controls its opportunity to represent the SEC Western Division in the league’s title game, returns to action on Oct. 5 when the Tigers travel to face Mississippi State at 6 p.m. CT on ESPN (network announced Sunday morning).

Despite the road defeat to the Bulldogs, LSU continued to pile onto its record-setting offensive start to the season.

Landry had career highs of 10 receptions for 156 yards and a touchdown, while Beckham added six grabs for 118 yards. Kadron Boone scored LSU’s first two touchdowns including a 48-yard catch-and-run midway through the first quarter. His 6-yard score followed the Johnson interception later in the quarter and gave LSU its first lead, 14-7.

Jeremy Hill paved the way on the ground with 86 yards on 21 carries, while hauling in four passes for 44 yards.

Murray was supported by running backs Keith Marshall (20 attempts, 96 yards) and Todd Gurley (eight rushes, 73 yards), who left the game before the half with an ankle injury.

Georgia wide receiver Chris Conley had five catches for 112 yards and a touchdown. Justin Scott-Wesley had the game-winning catch and totaled 55 yards on four catches.

LSU won the toss and deferred its decision to the second half, while Georgia received the opening kickoff.

The Bulldogs put the Tigers in a deficit for the first time in 2013 with a seven-play, 75-yard drive that did not include a third down. Murray was 5-for-5 passing for 58 yards, while LSU gave up two 5-yard penalties and got little traction on the line of scrimmage.

LSU took advantage of a Georgia penalty on third-and-long to keep the first offensive drive moving and answer the Georgia score. Mettenberger connected with Landry for 10 yards on third-and-5 and then displayed the poise that has put him among the league’s elite quarterbacks. Faced with third-and-7 at the Georgia 48, Mettenberger stood in the pocket as Georgia sent nine men on a blitz. With his backs picking up all but the one man, the Tigers signal caller waited for Boone to come out of his break and unleashed a touchdown strike just before being hit.

Boone, a senior, scored his first touchdown on his second grab of the season to tie the game at 7-7 with 8:52 remaining in the opening quarter.

The Tigers defense earned its first stop of the afternoon by turning over Murray. A pass batted down by Ego Ferguson and a successful blitz on second down put the Bulldogs into a third-and-10 situation. Murray looked for his tailback on a crossing route just behind the LSU defensive line but Johnson snagged the pass for his first career interception.

Starting at the Georgia 33, Hill and the Tigers made the most of the opportunity, as the running back caught a 13-yard pass to the 14. A 9-yard catch by Landry gave LSU a first-and-goal at the 3. Two Hill runs resulted in a lost yard, but again Mettenberger stood in the pocket on third down and found Boone crossing the middle for a 4-yard touchdown.

With its 21st point off turnovers this season, LSU moved ahead 14-7 at the 2:51 mark of the first quarter.

Fitting of an offensive first quarter, Murray quickly led the Bulldogs down the field for the tying score. A 23-yard run by Gurley and a 12-yard catch by Michael Bennett moved Georgia into LSU territory at the 44. Three plays later, Murray found Chris Conley behind freshman cornerback Tre’Davious White for a 25-yard touchdown in the back of the endzone.

Though the first quarter didn’t see a single punt, the teams combined for three-straight before Georgia took over at its 27.

With LSU safety Craig Loston along with Gurley both exiting the field with injuries following the back’s 23-yard run, Georgia used Marshall to march into LSU territory. A 19-yard run by the sophomore setup first-and-goal at the LSU 9. However, LSU’s defense stiffened against the run and a third-down pass from Murray to Scott-Wesley fell incomplete. Georgia regained the lead with a 24-yard Marshall Morgan field goal with 8:16 left in the half.

The Tigers answered the field goal with one of their own, as freshman Colby Delahoussaye nailed a career-best 49-yarder that tied the game at 17-17 with 3:51 remaining before halftime.

LSU had the opportunity to keep the game knotted before halftime, however, Murray scrambled to his right on third-and-7 from his 21 and threw across his body for 10 yards a first down. Catches of 28 and 24 yards by Conley and Reggie Davis put Georgia in the LSU redzone with plenty of time to execute its offense despite having only one timeout. For the second time on the drive, the Tigers nearly got off the field but cornerback Jalen Mills was flagged for pass interference in the endzone. Two plays later, Murray snuck in for a 1-yard touchdown.

The touchdown with 20 seconds left gave Georgia a 24-17 halftime advantage, as the Bulldogs outgained LSU 143-13 in net rushing.

LSU used Hill for 35 of its 45 rushing yards on its first drive of the second half to enter Bulldogs territory, but a third-and-3 pass intended for Beckham near the goal line sailed high. Delahoussaye split the uprights from 39 yards and trimmed the Georgia advantage to 24-20 with 9:50 left in the third quarter.

Georgia answered with a field goal of 55 yards by Morgan, also a career best effort by the sophomore placekicker. A 33-yard pass from Murray to Conley on third-and-9 setup the field goal and pushed the lead back to seven, 27-20.

The see-saw scoring continued, and this time it was the Tigers’ turn to respond. Landry’s 26-yard catch and run to midfield gave LSU the opportunity to take a shot at the Bulldogs. On third-and-9, Mettenberger attacked the Georgia secondary again and found Landry for a 39-yard touchdown.

LSU tied the game at 27-27 with 3:40 remaining in the third quarter and looked to be taking momentum after forcing Georgia to punt from its half of the field. However, with three men bearing down on him, Beckham muffed the punt return and Georgia recovered at the LSU 20. On third-and-11 from the 21, Murray found Bennett behind blown coverage for a 21-yard touchdown.

Instead of having possession and a chance to take the lead, the Tigers turnover allowed Georgia to go ahead 34-27 with 1:33 remaining in the quarter.

Regardless of the situation, Mettenberger continued to lead the Tigers. After Hill picked up a first down with solid running to the LSU 41, Mettenberger found Beckham streaking across the field for 17 yards to the Georgia 42. Hill picked up another first down on a third-and-1 pitch. Though a long pass to Travis Dickson bounced out of the tight end’s grasp and a short toss to Landry was nearly picked off, the quarterback found Landry between three defenders for 25 yards to the 6. The second of two runs by running back Kenny Hilliard was a 2-yard touchdown that tied the game at 34-34 with 12:17 to play.

On the ensuing drive, Murray helped Georgia take the lead once again. He ran for a first down with 11 yards to his 36 and connected with Conley for 16 yards to the LSU 46. Facing fourth-and-2 from the 38, Georgia passed on a second 55-yard field goal attempt and elected to go for it. Murray converted with a 10-yard pass to Scott-Wesley, and a 15-yard penalty for roughing the passer led to a 38-yard field goal by Morgan.

With less than eight minutes to play and facing a third-and-22, Mettenberger and Beckham connected for 25 yards. The play keyed a 75-yard drive that gave LSU a 41-37 lead when Hill scored untouched from eight yards. Catches of 14 and 12 yards by Landry, and a 27-yard reception by Beckham put the Tigers in position to take the lead with 4:14 remaining.

After Murray’s six-play, 75-yard answer, LSU was left with 1:42 to play from its 24. A Beckham 18-yard catch to the LSU 35 on second-and-17 helped Mettenberger overcome a sack on first down. But, it was as far as the Tigers would advance. Four passes down the field fell incomplete, as a defensive pass interference penalty was ignored on third down and a an intended receiver slipped on the Tigers’ final offensive play.