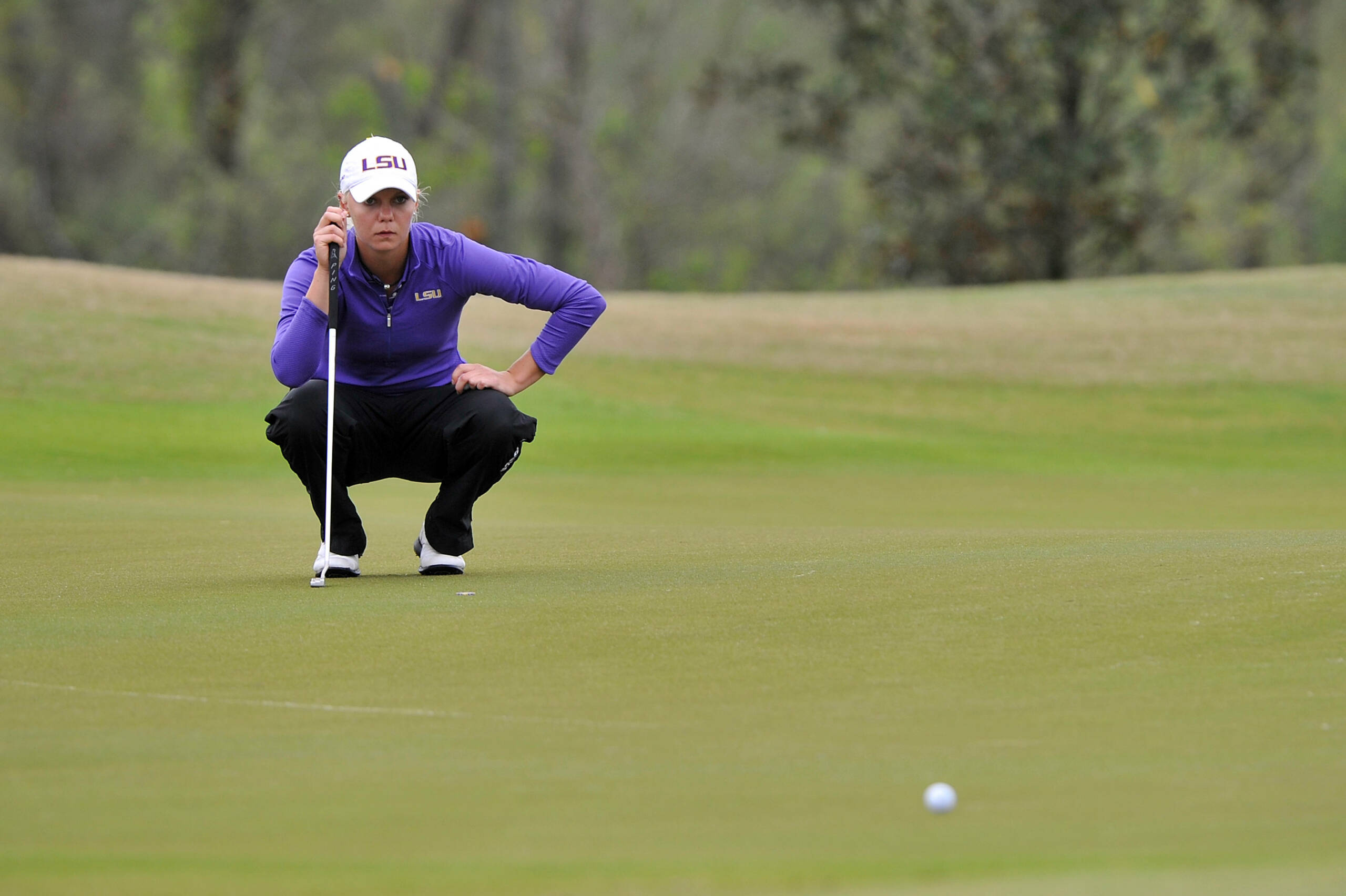 BATON ROUGE – The fifth-ranked LSU women’s golf team was able to move into the lead late in the afternoon in a rain-delayed first round at the University Club on Friday and holds a three-shot lead after the first round of the LSU Tiger Golf Classic.

The first round, scheduled for an 8:30 a.m. start, was delayed until 11 a.m. and converted to a shotgun start to allow all the teams to be on the course at the same time in an attempt to get the round completed. Despite rain during the round, the first round of the 54-hole event was completed and the tournament is scheduled to resume with tee times beginning at 8:30 a.m. on Saturday.

LSU posted the fourth best round in the two years of play on the renovated U-Club layout with a seven-over par 297 on a course dampened by overnight rains and intermittent showers throughout to go with a tough north wind. That give the Lady Tigers, looking for their fourth team win of the year and their first at the U-Club since 2005, a three-shot lead over Tennessee at 10-over 298 with North Carolina third at 13-over 301 and Vanderbilt at 14-over 302.

“I was very proud of the staff and all of the volunteers for helping us get this round in,” LSU Coach and tournament host Karen Bahnsen said. “They were tremendous. The golf course played really tough. A north wind on the back side is very tough out here. Some of the holes that our girls normally hit wedges into the green, they were having to hit woods in. That’s a huge difference, but they persevered. They had a couple of bad holes, everyone did, but they didn’t let it get them down. They kept fighting through it all, maintained their composure and we were able to finish strong.”

LSU got three counting birdies from Austin Ernst, Madelene Sagstrom and Jacqueline Hedwall that got LSU into the lead position in the final hour of play. Sagstrom, LSU’s freshman from Sweden, led the Lady Tigers with a one-under 71, while senior Tessa Teachman and sophomore Ernst each posted one-over rounds of 73. LSU’s other counting score came from senior Hedwall who posted a six-over 78.

“Madelene (Sagstrom) was huge. She hit the ball so solidly,” Bahnsen said. “She hit some good putts that didn’t drop too. She just wants to continue to hit the ball well and have some chances.”

Sagstrom, ranked 47th in the country in the Golfstat rankings, is alone in second place with the lead held by 10th-ranked Martina Alex of Vanderbilt, who posted a two-under round of 70. The 70 equals the second best single round shot over the two years on the renovated layout for the Tiger Golf Classic.

Alex, who started on hole 1, turned at two-over after two bogeys and seven pars, but then proceeded to birdie four holes on the final nine holes, including the par 4 15th, the 494-yard par 5 17th and the course’s signature hole, the 372-yard par 4 18th.

“It was a tough day weather wise from warming up to the end. It was cold and the ball wasn’t carrying,” Alex said. “There were periods of time where it was pretty windy but I played hard. I was hitting the ball well and had solid ball striking to give myself opportunities for birdies. I was 2-over after five or six (holes) and my goal was to make a couple of birdies to get back to even before I was done. Midway through the back nine I was feeling really good and capitalized on opportunities.

Four other players, Brooke Beeler of TCU, Lauren Greenlief of Virginia, Catherine O’Donnell of North Carolina and Lauren Stratton of Vanderbilt, fired even par rounds of 72 with Teachman and Ernst of LSU in a group tied for seventh place at 73.