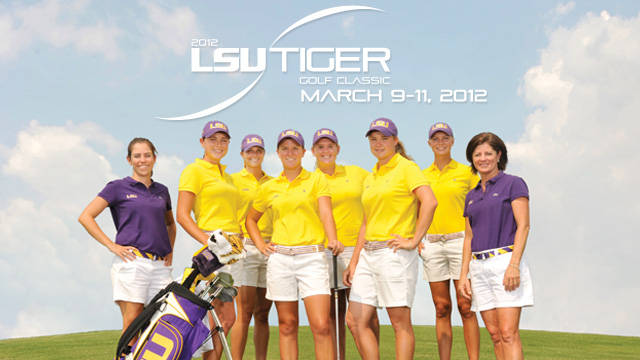 UPDATE: Round 1 has been delayed by rain.

BATON ROUGE – With one eye possible on the sky, the LSU Tiger Golf Classic gets under way Friday at the University Club as the No. 5-ranked LSU women’s golf team looks to capture the event as a team for the first time since 2005.

A total of 14 teams will take part in the three-day 54-hole team event. All rounds, with tee times on Friday and Saturday, begin at 8:30 a.m. Admission to the tournament is free of charge.

Along with LSU (ranked five in the National Golf Coaches Association poll), the field includes No. 6 Vanderbilt, No. 11 North Carolina, No. 14 Tennessee and No. 23 North Carolina state. Purdue, Texas Christian and Virginia are receiving votes in the poll. Also in the field are Kentucky, ULM, Louisville, UNC Wilmington and Notre Dame.

The eye on the sky may be necessary because there is a 50 percent chance of rain on both Friday and Sunday. Since the tournament moved to the U-Club in 2000, all of the tournaments have been played to conclusion.

Last year, Arkansas broke out of a logjam in the final round to shoot the first under par round on the then newly-renovated course with a one-under par 287, giving the Lady Razorbacks a three-day total of 24-over par 888 and a seven-shot win over Virginia. Lindy Duncan of Duke won the championship in a playoff over AnnaKarin Ljungstrom of Louisville after the pair tied at 2-over 218. Ljungstrom returns for this year’s event.

The Lady Tigers are one of two teams ranked in the top 25 with at least three team wins (top-ranked UCLA has four).  Ironically, every LSU win has come in odd-numbered tournaments and this is LSU’s seventh tournament of the season.

Thursday, the teams practiced on the U-Club course and many players joined in to take part in the annual college-am event.

“This is a weekend we always look forward to and have for many years,” said LSU Head Coach Karen Bahnsen. “We are excited about the tournament. We have a smaller field this year, but it is a quality group of teams and we are excited to get things under way. The girls have been working very hard in preparation for this one and we hope all our fans get the opportunity to come out and watch us play this weekend.”

LSU has won the event seven times since its inception as the LSU-Fairwood Invitational in 1982. The Lady Tigers won events at the U-Club in 2000, 2001 and 2005. Eight Lady Tigers have captured the title over the years, the last being Megan McChrystal in 2010 who captured the joint LSU-Tulane event held at English Turn Country Club while the University Club was undergoing renovation.

LSU will tee off in the final wave of the opening round with Vanderbilt and North Carolina beginning at 9:50 a.m.

Live scoring of the event can be found at LSUsports.net through Golfstat.com. Updates on the round are available at www.facebook.com/LSUwomensgolf and on Twitter @LSUwomensgolf.