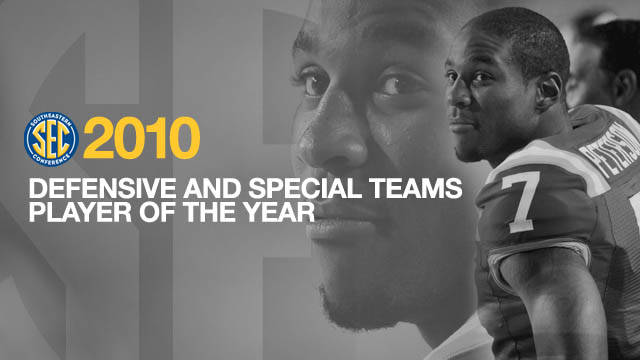 BIRMINGHAM, Ala. — A banner junior season for LSU cornerback Patrick Peterson has been recognized by the Southeastern Conference head coaches as he earned SEC Coaches Defensive and Special Teams Player of the Year honors on Wednesday, the league office announced.

“It’s an honor to win such a prestigious award,” said Peterson. “When you look at all the great players in the SEC and on defense, especially, I am honored to have won it. I am thankful to my teammates, my coaches and the coaches in the league who voted for me. I wanted to be the best player I could be and if you work hard, good things happen. I can’t wait to get back on the field for the Cotton Bowl.”

Peterson joins a prestigious list of LSU defensive All-Americans that have garnered SEC Player of the Year accolades, including Chad Lavalais in 2003 and Glenn Dorsey in 2007. Under head coach Les Miles, LSU has produced two SEC Defensive Player of the Year honors, representing the most of any coach in the league since 2005.

Peterson finished the regular season with 36 tackles while ranking fifth in the Southeastern Conference in interceptions with four. He added 1.5 tackles for loss, six pass breakups and a blocked field goal. Like most of his career, opposing teams rarely threw his side of the field and when they did, he rose to the challenge.

He arrived on Wednesday evening in Orlando for the ESPN Home Depot College Football Awards, which will be held from Walt Disney World’s Atlantic Dance Hall on Thursday night. The show airs live on ESPN at 6 p.m. CT. A special red carpet show will be televised on ESPNU starting at 5 p.m. CT.

Peterson will appear on The Home Depot College Football Awards Roundtable Special, a discussion about the year in college football hosted by Tom Rinaldi at 4 p.m. CT Thursday on ESPNU.

Peterson is a finalist for the Jim Thorpe Award and the Chuck Bednarik Award. Both will be presented on Thursday night during the two-hour show. He is seeking to become the first Thorpe Award winner in LSU history since the trophy’s creation in 1986.