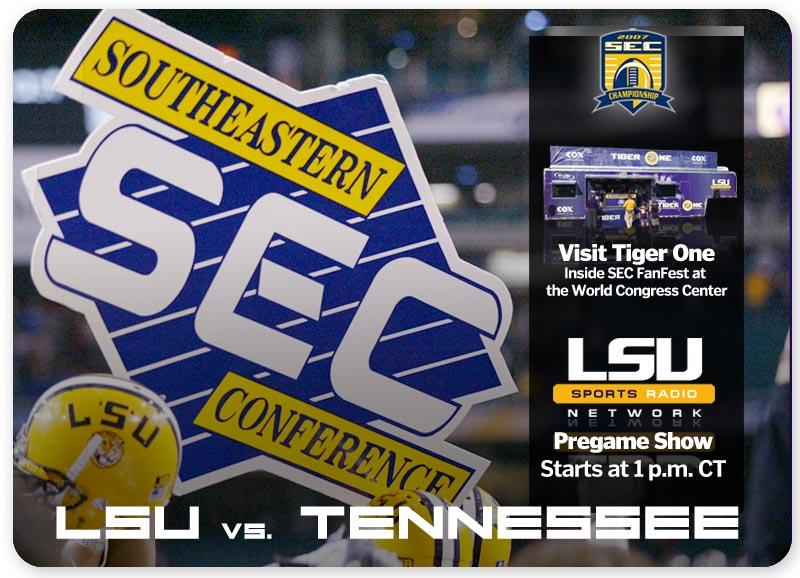 ATLANTA — LSU will go after the school’s 10th Southeastern Conference title on Saturday when the seventh-ranked Tigers face 14th-ranked Tennessee in the league’s championship game here at the Georgia Dome.

Kickoff for the contest is scheduled for 3:05 p.m. CT. The game will be televised to a national audience by CBS. The game can also be heard in the LSU Sports Radio Network as well as on the Internet in the GeauxZone on LSUsports.net.

In its history, LSU has claimed a total of nine SEC titles. A win over Tennessee will make the Tigers one of just four SEC schools to have claimed at least 10 conference titles, joining Alabama, Georgia and Tennessee.

The Tigers, who captured their first outright SEC Western Division title this year, bring a 10-2 overall mark into the game. LSU won the SEC West with a 6-2 league mark this year. Tennessee, winners of five straight, stands at 9-3 overall.

Saturday’s game will mark the first between the teams since a 28-24 LSU win last year in Knoxville.

“We’ve had a great week of practice and this team is ready for the opportunity to play for the conference championship in the finest football conference in America,” LSU coach Les Miles said. “This is a tremendous opportunity and this team understands what they are playing for on Saturday.

“At the beginning of the season when this team set its goals, one of the things at the top of the list is winning an SEC title. Now that goal is right there within our reach. We just have to go out and put forth a 60-minute effort of playing the type of football that we are capable of.”

The Tigers may have to go without starting quarterback Matt Flynn against Tennessee as the senior will be a game time decision with a shoulder injury. Flynn, who was injured last week against Arkansas, has thrown for over 2,200 yards and 17 touchdowns this year. Flynn has thrown three touchdowns in four of LSU’s last five games.

“Matt took snaps and threw balls this week,” Miles said. “It will be a game time decision as to whether or not he can go. We’ll watch him warm-up and if he’s got zip on the ball and he feels like he can go, then he’ll play.”

If Flynn can’t go, they’ll turn to sophomore backup Ryan Perrilloux. Perrilloux, who started in place of an injured Flynn against Middle Tennessee earlier this year, has thrown for 451 yards and seven scores in 10 games this year.

Miles also said the Tigers will get back the services of return specialist/running back Trindon Holliday, who missed last week’s game with an ankle injury. Holliday, who holds the school career record with two kickoff returns for touchdowns, is averaging nearly 12 yards every time he touches the ball.

Offensively, the Tigers will continue to rely on the running of senior Jacob Hester, who has rushed for 897 yards and 11 touchdowns this year and the pass-catching of three big-play receivers in Early Doucet (45 catches, 445 yards, 7 TDs), Brandon LaFell (45 catches, 576 yards, 3 TDs), and Demetrius Byrd (29 catches, 521 yards, 6 TDs).

As a unit, the Tigers have scored a school-record 482 points, while averaging 40.2 points per game. LSU has scored at least 40 points a school-record seven times this year.

Defensively, the Tigers, despite some recent struggles, continue to rank No. 3 in the nation in total defense, allowing 278.9 yards per game. LSU is also ranked among the top 10 in the nation in pass defense and pass efficiency defense.

The Tiger defense is led by a pair of All-Americans in defensive tackle Glenn Dorsey and safety Craig Steltz. Steltz, who is a finalist for the Thorpe Award as the nation’s top defensive back, leads the Tigers with 89 tackles and he’s first in the SEC in interceptions with six.

Dorsey, a finalist for five national awards, has racked up 61 tackles, 11.5 tackles for losses and six sacks for the Tigers. As a unit, LSU has recorded 32 sacks and forced a total of 31 turnovers.

The LSU defense will go against a Tennessee offensive line that has allowed only four sacks all season. The Vols are averaging 35 points and over 400 yards per contest.

“I expect our defense to come out and play a strong football game, one that will reflect the type of players that we have on that side of the ball,” Miles said. “I like the preparation that we’ve had this week and I like our game plan. Now, we just have to go out and execute.

“I told the team that these are the types of games that you come to LSU for. It’s going to be fun to go out and watch this team compete and play for a conference title.”