GameDay Xtra: Doucet?s Career is a Source of Inspiration 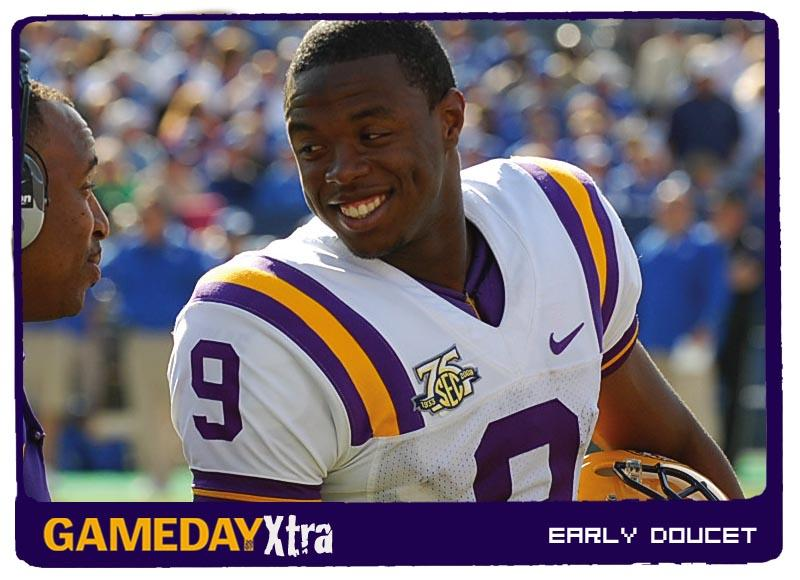 He has a smile that lights up a room. Maybe it is the fact that he loves to unselfishly play the game or be surrounded by his teammates. Perhaps the single driving reason lies 60 miles away from Baton Rouge where a son and a daughter watch every play their father makes on Saturdays in the fall. For senior wide receiver Early Doucet, football has become a metaphor for life.

Doucet is the proud father of a daughter, three-year-old Malayne, and a son, two-year-old Peyton. The two, who live in St. Martinville, La., have given inspiration to their father in balancing all of the difficulties college and football present.

“Not only are you doing this for yourself, but I’ve got two kids,” Doucet said. “I want them to live as comfortable a life as they can and not have to struggle. That drives me that much more to go out there and run the sprints when it’s 105 or 110 degrees outside and go through the hard practices.”

His children are in Tiger Stadium every home game LSU plays. When on the road, they sit with intrigue watching their dad on television.

“They get to come to the games, and they know me when they see me out there on the field,” he said. “If they watch the game on television at home, they know that’s me. They cheer for me because they know that’s Dad. It makes me want to do well to make them proud.”

Doucet hopes to provide for his family when he leaves LSU as a sure-to-be NFL Draft selection next spring. Playing professional sports has been a lifelong dream for the senior, but football did not become a sole reality for him until his junior year of high school.

Prior to that season, Doucet made possibly the biggest decision of his life by giving up his favorite sport — basketball. Doucet received numerous offers from Division I schools during his early high school years.

He played AAU basketball with a group of guys that would go on to represent LSU at the 2006 Final Four. As a six-foot-tall 13-year-old, Doucet had the makings of an outstanding guard. He was bigger than Glen “Big Baby” Davis. He shared the same high school backcourt as former LSU shooting guard Darrel Mitchell.

“Everybody thought I was going to be playing basketball and go to the NBA,” Doucet said. “Playing with guys like “Big Baby,” who I was taller than at the time, they finally hit their spurts.”

“My high school coach sat down with my family, and we talked about it,” Doucet said. “From a football perspective, I was like maybe I could make this thing work. I got good at it and continued to work day after day. I started getting in the weight room and getting bigger and stronger. I took my talents to that sport and tried to excel in it.”

His hard work paid off immediately. As a running quarterback at St. Martinville High, Doucet racked up 7,104 career all-purpose yards and 79 touchdowns.

Despite continuing his football career, Doucet occasionally misses his first love of basketball.

“I miss the most about not being around those guys like the year they made the run to the Final Four,” he said. “If you take out Darrel and put me in there, that was basically our AAU team. To see them go that far, I just feel like I was a part of that team because I grew up with those guys and played with them when we were young.”

The opportunity for Doucet to share in the revelry of a memorable season has carried over to the football field thanks in large part to the game-changing plays he makes. Perhaps the most meaningful moment came when he lifted up the hearts of LSU fans that lost belongings in the wake of Hurricane Katrina.

With the Tigers clinging to one last gasp at Arizona State, Doucet hauled in a miraculous fourth-down 39-yard TD pass from JaMarcus Russell that christened the beginning of the Les Miles era with an improbable 35-31 finish.

“It was tough to see people who lost everything,” he said. “They looked to a football game to lift their spirits and give them hope. To do what we did for them and the state of Louisiana was something that will stick with me forever.”

After a breakout junior season, one that featured a game-winning catch at Tennessee, Doucet was set on emerging this season from the shadows of Dwayne Bowe and Craig Davis as LSU’s No. 1 wide receiver. As a consensus preseason All-SEC selection, there was talk of Doucet even being a dark-horse for the Heisman Trophy.

Two games into the 2007 campaign, that dream was dashed. Doucet would have to overcome a groin injury that sidelined him for five straight games.

During his absence, the Tigers’ passing game was noticeably different. Whether it was through a lack of production or experience, the offense missed Doucet’s heart and skill.

“It was tough to sit there and not be able to contribute like you wanted to,” he said. “I had to stay positive in everything else I was doing just to help those young guys. You have to be a leader. That will just help them overcome adversity.”

Since his return, LSU has found new life through the air. Once again, Doucet has been the centerpiece.

In arguably the biggest play of the 2007 season, the senior helped the Tigers to a come-from-behind win at Alabama when he grabbed a 32-yard touchdown pass with 2:49 left in the game. With his kids watching at home, Doucet’s game-tying dash through the heart of the Crimson Tide defense enabled LSU to keep its national title hopes alive.

Doucet’s perseverance through injury has been a model for everyone on the team. Most importantly, his effort serves as a model for the values he believes in as a person and as a parent.

“I believe in hard work,” he said. “It is the only way you are going to get better. You have to work at something that you want to do or love to do. That is something you can expect from me always.”