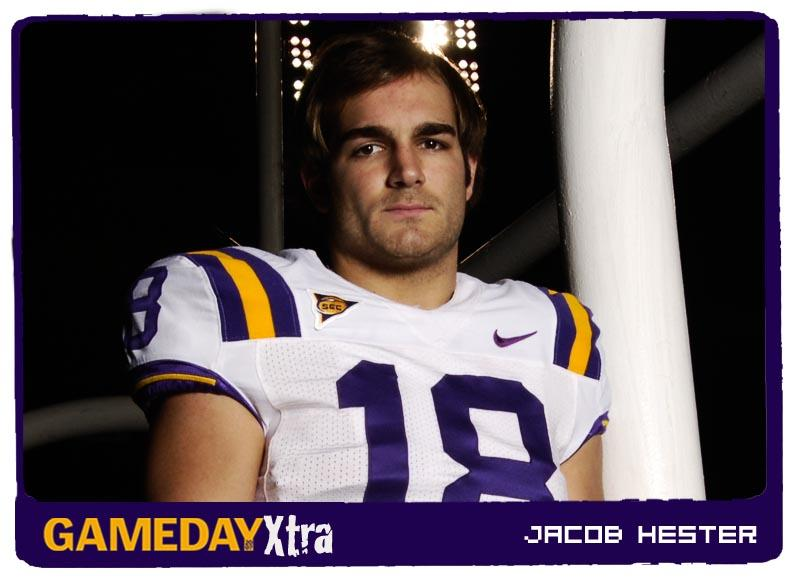 Jacob Hester is a Renaissance man.

Think about it for a moment.

How many starting running backs in Division I are listed as a fullback, yet get a bulk of the carries for their team? How many of those have hands like pillows out of the backfield, yet have the body to block SEC-caliber linebackers? How many of those go three full seasons without a fumble? How many of those play a significant role on special teams?

There can’t be many, but Hester definitely qualifies. In a day where most college football players specialize in one talent, LSU’s senior running back literally does it all.

The only explanation he gives for why he does what he does is simple.

“I love everything about the game and I love to play hard,” explained Hester. “I don’t do this because it’s a job. I do it because I love it.”

Hester comes from a football family. His dad coached him throughout Pop Warner football. His brother is a football coach at Captain Shreve High School in Shreveport, La. He is related to the Hall of Fame quarterback and current NFL analyst Terry Bradshaw.

Having family who understands the game helps, but Hester’s desire to play might be more impressive than his lineage.

As a four-year-old, Hester was placed on the six-year-old team alongside his older brother in their hometown of Shreveport.

“They couldn’t keep me out,” said Hester. “I always came to practice and tried to play, so they finally let me on the team.”

His passion for the game grew from there. He attended football powerhouse Evangel Academy during high school, playing with the likes of John David Booty of Southern California, Jonathan Wade of the St. Louis Rams and numerous players that have come through LSU’s program.

No friendship he made with any player at Evangel can compare with the bond he forged with his offensive coordinator.

Chris Tilley, a former player at Louisiana Tech and with the Chicago Bears, and Hester’s offensive coordinator at Evangel, is the father of the former Katie Tilley, Hester’s wife.

“Katie and I didn’t start dating until the year her dad became the offensive coordinator,” explained Hester.

Tilley obviously noticed something special about his star running back in high school.

“My dad would always come home from practice and rave about this stud player they had,” confessed Katie. “My dad always talked about him.”

“It’s always nice getting to talk football with him when I get a chance to go back to Shreveport,” said Hester.

“He makes good decisions with the ball,” said Miles. “He makes cuts. He’s a physical back. He runs hard. He has great ball security.”

“When your leader does the things that he is supposed to do, it makes it that much easier for the other guys to fall in line and do as they are told,” Porter said.

That leadership doesn’t stop at just the running backs.

“He’s been the foundation, in terms of leadership, for this team as a whole,” Porter added. “Coach Miles has put Jacob in a position to lead, and he has taken advantage of that.”

While LSU is grateful to have Hester in their backfield, they nearly missed out on him four years ago.

Schools from all over the southwest recruited him. He visited Oklahoma and Texas A&M numerous times. Texas Tech wanted him to play wide receiver. He actually committed verbally to Texas six months before national signing day. But when he decided to decline Texas’ formal scholarship offer, the persistence of former LSU coaches stuck out in Hester’s mind.

Hester wasn’t getting carries, though.

“They played me at fullback against Oregon State during my first game here,” said Hester. “I got playing time so I didn’t care.”

The attitude he carried three years ago still lives inside of him even though he officially starts at tailback now.

LSU has recruited extremely gifted running backs like Keiland Williams, Charles Scott and Richard Murphy since Hester began his tenure as a Tiger. If one of these three is getting a majority of the carries in a game, Hester doesn’t mind.

“If I didn’t feel that they were talented enough then I might not like it,” said Hester. “But all of those guys are just so talented. I’m honored just to be able to say that I start at running back at LSU because the guys behind me are so good.”

On top of respecting the aforementioned players, he has developed a close friendship with his backfield mates.

“We are all best friends off the field,” Hester said. “(Fullback) Shawn Jordan was a groomsman in my wedding. We all go out to eat once or twice a week together. I think that is what makes the transition of us all getting to play so easy. We aren’t selfish because we are all best friends.”

While his teammates are the glue that holds him together on the field, Katie does her fair share of critiquing as well.

“She understands football,” Hester remarked. “Believe it or not, she helps me. She knows when I’m doing something wrong. I really appreciate being able to sit down and talk to my wife about football.”

“Football just runs in my blood,” explained Katie. “My dad played, and now he coaches. My uncle Pat played 12 years for the Cardinals when they were in St. Louis. All of my dad’s brothers were great athletes.

“I always want to know more about sports. I love learning about them. I think that is one of the things Jacob liked about me.”

Katie and Jacob form a match made in heaven.

The same can be said for Hester and LSU football.

Against Florida this season, Miles called Hester’s number three times on 4th- down conversion opportunities. Hester responded by moving the chains on all three attempts, including the game-winning touchdown.

Two weeks later, Hester came up with a key block that kept a blitzing Auburn defender from sacking quarterback Matt Flynn. That block allowed Flynn to toss the game-winning touchdown to Demetrius Byrd with one second left.

The tough, hard-nosed football that Hester plays allowed LSU to win two nail- biters in a matter of three weeks. He does the dirty work that others don’t care to do, something not seen among most starting running backs in college football today.

“An old coach of mine used to tell me that I was a throwback player, and I never knew what that meant,” confessed Hester. “When it was explained to me, I realized that it was an honor to be called that because that’s the way I like to play football.”

Call him what you want. Talented. Physical. A Renaissance man. A throwback player. There is an abundant amount of adjectives that anyone can use to describe Hester as a person and as a football player.

To be safe, though, Terry Bradshaw should have a thesaurus handy on Sundays next fall.