It's GameDay: No. 2 LSU to Take on Middle Tennessee

by LSUsports.net (@LSUsports)
GameDay Central Getting to the Game Tiger One Village TigerVision FAQ Watch Two-Hours of Pregame Live +0 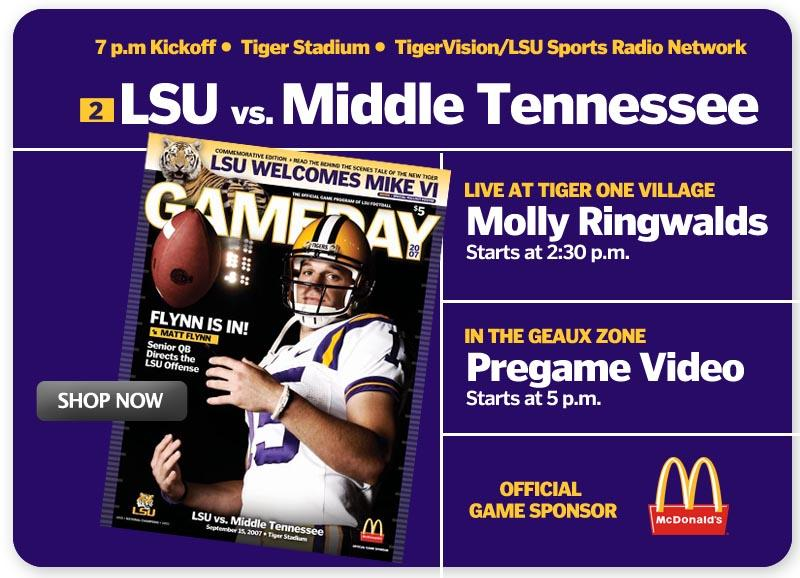 BATON ROUGE — One of the marks of a championship caliber team is quality preparation on the practice field Monday through Friday followed by the executing of the game plan on Saturday.

A week ago, the Tigers did just that, putting together one of the most complete games in recent history in their 48-7 victory over Virginia Tech. LSU will again get its chance to prove its No. 2 national ranking on Saturday when the Tigers host Middle Tennessee at 7 p.m. in Tiger Stadium.

The game between the Tigers and the Blue Raiders of the Sun Belt Conference will be televised on LSU’s pay-per-view network, TigerVision.  A sellout crowd of over 92,000 is expected to be on hand for only the second contest ever between the two teams. LSU won the only other meeting between the teams, a 30-14 victory in 2001 in Tiger Stadium.

2:30 p.m. Molly Ringwalds performs in Tiger One Village (outside PMAC)

Members of the Geaux Zone on LSUsports.net can watch LIVE pregame video (ends at kickoff per SEC regulations) and listen to the entire game audio broadcast starting at 5 p.m. CT. Not a member? Join now.

LSU, winners of nine straight games dating back to last season, brings a 2-0 mark into the contest. Middle Tennessee, the 2006 champions of the Sun Belt Conference, stands at 0-2 overall following last week’s 58-42 loss to No. 8 Louisville.

“We’ve had a good week of preparation,” LSU coach Les Miles said. “We’ve worked hard this week. I’ve seen our coaches coaching hard and I’ve seen our players working hard in improvement and mastering the game plan. In no way do I feel like we are giving less effort.”

Miles said the Tigers will be prepared to take Middle Tennessee’s best shot on Saturday night.

“They have a quality team, one that went to a bowl game last year,” Miles said. “I saw them improve from their first game to their second game. You can see that they have talent and they have some very good skill players.

“They scored 42 points against an eighth-ranked Louisville team. If we are not playing strong, quality defense, they can score. Their quarterback makes some really strong throws. We understand they are very capable. We are preparing for their best effort.”

LSU’s defense will again be challenged by a high powered Blue Raider offense, one that is averaging 28 points and nearly 400 yards per game. The Blue Raiders scored 21 first quarter points against Louisville last week, including two plays that covered over 70 yards.

The Tigers will combat the Middle Tennessee offense with one of the nation’s stingiest defenses. Through two games, LSU’s allowing only 3.5 points and just 147.5 yards per game. LSU’s allowed its opponent’s just one trip inside the redzone this year and they have yielded only one drive of over 50 yards. .

In addition, the Tiger defense has eight takeaways to its credit, including seven interceptions, three of which have been secured by senior safety Craig Steltz. Other defensive standouts for the Tigers through the first two games have been linebacker Ali Highsmith (14 tackles), defensive tackle Glenn Dorsey (11 tackles, 1 sack), and defensive end Kirston Pittman (9 tackles, 2 QB hurries).

When the Tigers have the ball, they will face a Blue Raider team that allowed 729 yards in the loss to Louisville. Through two games, the Blue Raiders have given up a total of 85 points and over 1,100 yards.

Despite the numbers that Middle Tennessee has allowed this year, Miles said that Tigers better be ready to execute on offense.

“They have seven starters back on a defense that helped them get to a bowl game last year,” Miles said. “And, they have 10 guys that have started in four or more games. Their defense understands where they are at and understand how to play. After watching them, you can tell they come after you. We are going to have to prepare and be ready to play and play well.”

Quarterback Matt Flynn continues to direct and LSU offense that has been nearly flawless through two games. In eight quarters of action this year, the Tigers have yet to commit and turnover on offense and they are averaging 46.5 points and nearly 500 yards per game.

Flynn, along with backup quarterback Ryan Perrilloux, have combined to connect on 36 of 54 passes for 450 yards and five touchdowns. Early Doucet has been their top target, hauling in 15 receptions for 153 yards and a pair of scores.

LSU’s running game has been impressive as well, as the Tigers have rushed for an average of 247.5 yards per contest. Senior Jacob Hester has led the way with 74.5 yards per game. Sophomore Keiland Williams is coming off a career-best 126 yards and two scores in the win over Virginia Tech.

Perhaps the biggest key to the LSU offense has been the play of the line, one that features a pair of first-time starters at right guard and right tackles in Lyle Hitt and Carnell Stewart. Other starters on the line for the Tigers include center Brett Helms, left guard Herman Johnson and left tackle Ciron Black. Will Arnold has also seen action at left guard for the Tigers.

“We’re getting better up front,” Miles said. “Brett Helms is going to be one of the best centers in this league and in America. He makes all of our calls inside and he’s having a great year. Ciron Black played a physical football game on Saturday. His improvement is obvious, along with Herman Johnson. Lyle Hitt and Carnell Stewart are coming and making strides. I look forward to their play as the season goes on. Both have shown improvement.”