Russell First of Four Tigers in NFL Draft First Round 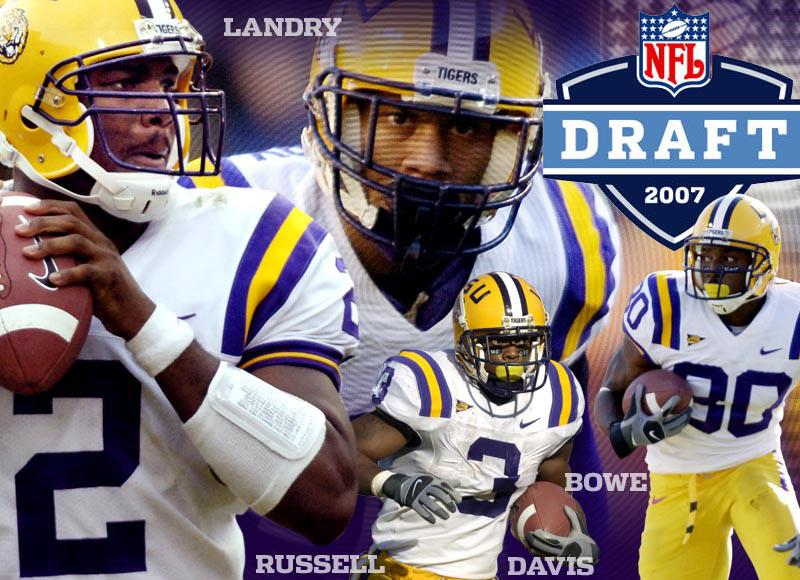 The 2007 NFL Draft is underway on Saturday and Sunday, April 28-39, starting at 11 a.m. CDT at New York City’s Radio City Music Hall. Held in New York City since 1965, the NFL Draft will be televised nationally by ESPN and the NFL Network.

Follow these players during the draft and use the links below to watch exclusive videos (available draft week) in the Geaux Zone.

BATON ROUGE — Former LSU standout JaMarcus Russell became only the second player in school history to be selected with the No. 1 overall pick in the NFL Draft as he, along with safety LaRon Landry and wide receivers Dwayne Bowe and Craig Davis, were all taken in the first round of the draft Saturday at Radio City Music Hall in New York City.

“It’s a great feeling to be part of a group of guys who made history,” Bowe said. “The class that I came in with was a history making class and to be a part of an NFL Draft that has four LSU Tigers picked in the first round is very special.”

Bowe, a Miami native, and Davis, a native of New Orleans, became only the third set of receivers from the same school to be drafted in the first round since the inception of the Common NFL Draft in 1967. The only other two times its happened came in 1997 when Florida’s Ike Hilliard and Reidel Anthony were taken in the first round and in 2001 when Miami’s Santa Moss and Reggie Wayne were both first round picks.

“This is a great day for LSU and a great day for these young men and their families,” LSU coach Les Miles said on Saturday. “We are very happy for these guys. They are very deserving of being picked in the first round and we are very proud of them. All four of these guys have worked extremely hard to get to this point in their career. They all played a major role in the success of our football program and LSU athletics in general over the past four years.

“The other thing that I’m proud of is that they are all quality individuals who have tremendous character. They have always represented LSU, our community and the state of Louisiana in a first class fashion and I’m sure they will do the same for the franchises they will be representing in the NFL.”

Miles also noted that all four players are on schedule to graduate within the next 12 months.

With four first round picks this year, LSU has now had seven players taken in the first round of the draft over the past four years. LSU’s also had at least one first round pick for four straight years, a streak that began with Michael Clayton going 15th overall to Tampa Bay in 2004.

By going first overall, Russell joins former Heisman Trophy winner Billy Cannon as the only players in school history to be picked with the first pick in the NFL Draft. Cannon was taken No. 1 by Los Angeles in 1960.

Landry, who is from Ama, La., became the highest LSU defender ever picked in the Common NFL Draft, topping former Tiger linebacker Eric Hill, who was taken with the 10th overall pick by the Phoenix Cardinals in 1989.

Also, by going to the Redskins, Landry will be just miles apart from his brother Dawan, who is a starting safety for the Baltimore Ravens.

Bowe and Davis join a group of four other LSU receivers who have been drafted since 2004. Clayton and Devery Henderson were both taken in the 2004 draft, while Skyler Green and Bennie Brazell were picked a year ago.

“I’m very excited to have the chance to go to the next level,” Bowe said. “This is a great opportunity and I’m looking forward to the chance to play for the Kansas City Chiefs.”