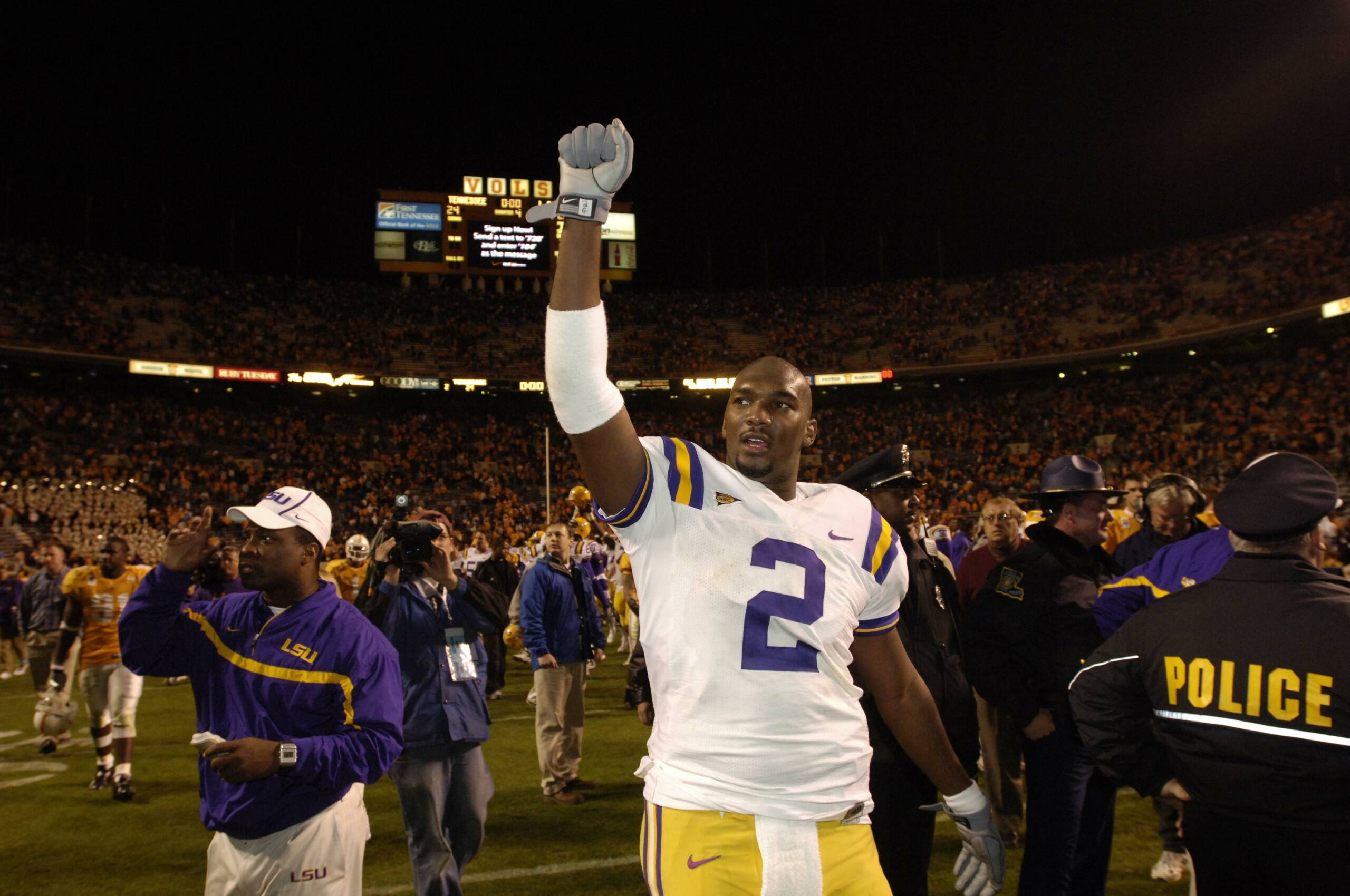 KNOXVILLE, Tenn. — Behind a three-touchdown performance by JaMarcus Russell, the 13th-ranked LSU football team earned its first road victory of the 2006 season, 28-24, over No. 8 Tennessee on Saturday at Neyland Stadium.

LSU (7-2, 3-2 SEC) won its 12-straight game in the month of November dating back to the 2003 season. It was the school’s second victory all-time in Knoxville.

The nation’s best defense bent uncharacteristically, allowing two of the three longest scoring plays of the season (37-yard pass and a 54-yard pass). However, the Tigers still did not allow 250 yards of total offense — Tennessee finished at 248.

Russell wasn’t without personal breakdown in the contest, tossing three interceptions including one returned for a 31-yard touchdown that put the Tigers down 10 on the second play of the third quarter.

Russell was the hero, however, as he completed 24-of-36 passes for 247 yards. Early Doucet, who scored the game-winner with nine seconds to play, had a game-high eight receptions for 73 yards and a touchdown.

LSU’s usual suspects, Dwayne Bowe and Craig Davis, were also a part of the act. Bowe had six catches for 89 yards, while Davis added three for 42 yards. Both scored touchdowns.

Tennessee (7-2, 3-2 SEC) saw its five-game winning streak come to an end due in part to the time its defense had to spend on the field: more than 41 minutes.

LSU had 81 offensive plays for 478 yards, while Tennessee ran only 50.

Stymied in the first quarter, the Vols turned to backup quarterback Jonathan Crompton. The redshirt freshman completed 11 of 24 passes for 183 yards including the two long TD passes. Starter Erik Ainge left after completing 1 of 6 passes.

Robert Meachem was Crompton’s favorite target, as expected, with five catches for 121 yards and both touchdowns.

Like most LSU opponents, the Vols couldn’t run the ball consistently — picking up only 62 yards on 20 carries.

For the ninth time in as many games, LSU won the toss and deferred possession until the second half.

After a three-and-out by Tennessee, the Tigers used Williams to jump-start the offense on the first series of the game. Williams’ speed and Russell’s arm combined for three-consecutive first downs into Vols territory.

The drive then stalled when LSU offensive lineman Herman Johnson left the game for one play, the Tigers were called for a false start, and Russell was sacked and shaken up after taking a knee to his head.

Another three-and-out by Tennessee was followed by a 55-yard punt that pushed the Tigers into the shadow of their endzone with backup quarterback Matt Flynn entering in place of Russell for the series.

Flynn survived the series and punter Chris Jackson bailed out the Tigers with a 55-yard punt.

After a third series without a first down, Britton Colquitt punted another beauty. However, LSU punt returner Craig Davis‘ fake of the fair catch allowed the ball to bound into the endzone for a touchback.

Russell returned to the game and led the Tigers on their first scoring drive, as the 6-6 Mobile native found Bowe for 25 yards on third-and-20 to keep the drive moving.

Five plays later, Russell fired a bullet to Davis from 24 yards out for a sliding touchdown and a 7-0 lead with 14:32 to play in the half.

Tennessee, which had minus-5 yards of total offense in the first quarter, earned its first two first downs of the contest on the ensuing drive. But, the Vols were stopped before entering Tigers territory.

An LSU punt looked to have touched a Tennessee player on the hand before bounding into the endzone. The officials reviewed the play and did not overturn their call of a touchback.

With head coach Les Miles and his staff still questioning the referee’s call, Crompton began a drive down the field that included one rush and seven passes — the final being a 37-yard touchdown pass into the out-stretched arms of Meachem.

LSU’s looked to answer the score immediately, as Russell scrambled for a career-best 34 yards into Vols territory. After another first down to the Tennessee 33-yard line, Russell was intercepted inside the 10-yard line by Jonathan Hefney.

Hefney returned the ball 35 yards, setting up a James Wilhoit field goal with three seconds left in the half.

The Vols extended the lead to 17-7 on the second play of the second half, as the ball slipped from Russell’s hand, sailing over his intended receiver and into the waiting arms of Tennessee defensive back Demetrice Morley. Morley ran virtually uncontested for a 31-yard touchdown.

With its back against the wall, LSU responded on the road like it was unable to do twice against top-notch opponents Auburn and Florida. The Tigers scored consecutive touchdowns to re-take the lead.

Russell led the Tigers 77 yards in 10 plays for a 5-yard touchdown to Bowe. Then LSU defense forced a three-and-out, and a personal foul for fair catch interference on the punt gave the Tigers a short field. Finally, LSU ran on six of eight plays, including a touchdown run by Williams from seven yards out.

Early in the fourth quarter, two more LSU drives in Tennessee territory ended in turnovers. Russell was intercepted at the 15 and Bowe fumbled at the 46 to give the Vols a chance for a comeback of their own.

On the next play, Tennessee made the most of the second chance, throwing a 54-yard touchdown pass from Crompton to Meachem to take a 24-21 lead with 7:29 to play.

Trailing by three with 2:15 to play, LSU was faced with a fourth-and-7 at the Tennessee 42. Russell rifled the ball to Doucet who pulled the it away from a Tennessee defender for an 8-yard gain and the first down.

From there, LSU advanced to the Tennessee 7-yard line with an 11-yard pass to Doucet, a 9-yard run by Hester and a 7-yard run by Williams.

Russell threw the ball away under pressure on first down, then ran toward the right sideline for three yards on second down. On third down, with plenty of time in the pocket, Russell looked for Bowe in the back of the endzone. Instead, Doucet picked the ball from the air just in front of Bowe for the 4-yard game-winning score.

Team Notes
1. LSU’s game captains were 41 Chris Jackson, 72 Glenn Dorsey, 75 Brian Johnson and 94 Chase Pittman.
2. LSU won the toss and deferred to the second half. Tennessee received the opening kickoff.
a. LSU has won the toss in all nine games this season.
3. Tigers extending their consecutive starts streak today were: FS LaRon Landry (44), CB Chevis Jackson (22), DE Chase Pittman (15).
4. LSU has recorded at least one sack in 15 straight games after a first quarter sack by Glenn Dorsey in today’s game. The last time LSU’s defense did not record a sack was against North Texas last season.
5. LSU has outscored its opponents 101-7 in the first quarter this season. Florida is the only team to dent the scoreboard in the first quarter against LSU.

“We ran the football a little bit better today. We turned it over a little too much, and we’re going to stop that. But when the chips are down and a play has got to be made, we play ?em and we make ?em. So, I’m proud of this team. This is the second time that LSU has beaten Tennessee at Tennessee. Our guys will remember this one.

“We’ve got to get better. We’ve got to stop some of that stuff. But we’ve got to keep the same play, the same heart, and the same style of man that we are. Because that’s who our team is right there. Write that down.”

Early Doucet, WR: “[On the touchdown catch] (JaMarcus Russell) threw a ball in my direction, and I made the catch. It was real intense. (Russell) just said (before the game-winning drive) that we’ve got to come together, and we’ll score. That was our whole objective to get six on that drive, and we made some plays, he made some plays, and we got the score.

“Our mindset was really just to go out there and execute. If you execute the plays that are called, with our offense and the players that we have on our team, I don’t think there’s any defense that can stop us. I thought we executed on fourth-down (earlier in the drive), and we got the play that we needed and just kept the drive going.”

JaMarcus Russell, QB: “Before we came out, coach Fisher told us that whatever happens, make no excuses. Empty your pockets. Leave your excuses at home. We just went out there and played tough no matter what the situation was. Just never give up.

“[On his critics] Everybody has an opinion. I’d say for myself, I think I kind of proved myself today. But I just have to keep fighting and get better.”

“We shut their offense down for the most part, and I’m just really proud of everybody.”

Head Coach Phillip Fulmer: “Obviously that hurts. That really hurts our football team. There was great effort on the field and great effort in preparations during the week. It’ll hurt tonight, and we can allow it to hurt tomorrow. But come Monday, we need to get ready to go to Arkansas and get ready to play that game.

“You have to give a lot of credit to LSU. Their quarterback (JaMarcus Russell) is a major-league player in every sense of the word. Our team fought its rear off. It’s disappointing that sometimes it doesn’t turn out your way. We’ll continue to fight and scratch and work to get to where we want to get to.

“I’m really proud of Jonathan Crompton. He showed a lot of poise in a situation that’s about as tough as you could be put in against the No. 1 defense in the country.

“Our defense was left on the field entirely too long.

“Nothing’s changed. We’re going to coach them just as hard, and we expect them to respond just as well as they have all season long.

“We’re not where we need to be right now (in the running game) to say the least. We miss LaMarcus (Coker) right now. We were a little limited there.

“Four turnovers will usually win you a game, and it gave us a chance to win. The kids laid it on the line, and the coaches did a great job preparing. We just didn’t quite get it done.

“This team still has a chance to have a very fine season. And from where everyone expected us to be, we’ve done quite well.”

On quarterback Erik Ainge: “He got tackled, and he not only reinjured that ankle a bit, but I think he hurt the other one a bit as well. In pregame, he looked like he could (play).

On quarterback Jonathan Crompton: “Jonathan’s going to be a heck of a quarterback … He’ll be a really fine football player with more time and experience. I couldn’t have asked any more out of him.

Turk McBride, DT: On the LSU running game: “They showed what we thought we would see. They knew we
would come off the ball, and they tried to do a lot of misdirection things like blocking down and pulling the guard. It all comes down to execution, and at certain points we did it real well. And at times we looked lackadaisical.”

Xavier Mitchell, DE: “This was very disappointing. It hurts us inside. Our biggest battle now is coming back from this. We are going to watch film, correct our mistakes, and we all can count on each other as we continue against Arkansas.

On LSU quarterback JaMarcus Russell: “JaMarcus is tremendous. We got pressure on him like we wanted to. It just came down to tightening it up at the end.”