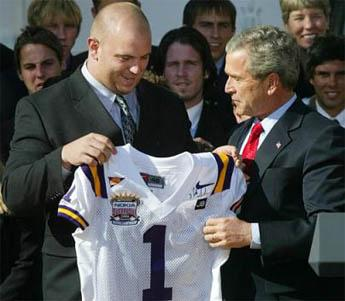 (Click here to view the photo gallery from the Tigers’ visit to Washington, D.C.)

BATON ROUGE — The champions of college football in 2003, LSU and Southern Cal, finally met on Tuesday only the teams didn’t meet on the gridiron, however, it was in the East Room at the White House.

Prior to their meeting with the President, LSU and Southern Cal were both staged in the East Room, where paintings of former Presidents Washington and Roosevelt hang, for a team picture. Much like that of pre-game warm-ups in a football game, the Tigers were on the south side of the room lining up for their picture with President Bush, while the Trojans lined up for their picture on the north side of the room just 15 yards away.

As both teams were assembling for the picture, LSU coach Nick Saban and USC coach Pete Carroll talked for close to 10 minutes.

He then walked across the room for a picture with Southern Cal.

Following the team pictures, all five of the teams in attendance, reported to the South Lawn where the President congratulated each of the squads for their accomplishments both on and off the field.

Before his remarks about LSU and Southern Cal, President Bush quipped that since there was some debate over who the national champions in football really were, “the South Lawn is pretty good sized” as if asking the teams would like to play each other in a game. There wasn’t a game on Tuesday, but LSU team captain Rodney Reed did present Bush with a personalized national championship LSU jersey.

After 15 minutes of remarks from President Bush, which included a mention about the impact that longtime equipment manager Jeff Boss had on the Tigers, the teams departed the White House. Prior to leaving Washington D.C., the Tigers visited the Lincoln Memorial. Earlier in the day, LSU toured the capitol building and meet with members of the Louisiana delegation.

“It was great to be here today,” Saban said following the meeting with the President. “This was a fantastic experience. This was one of those things that you can’t buy. To meet with the President at the White House and to come to Washington D.C. is a great experience and something that this team will remember for the rest of their lives.

“What makes this special is that it’s something that this team earned.”