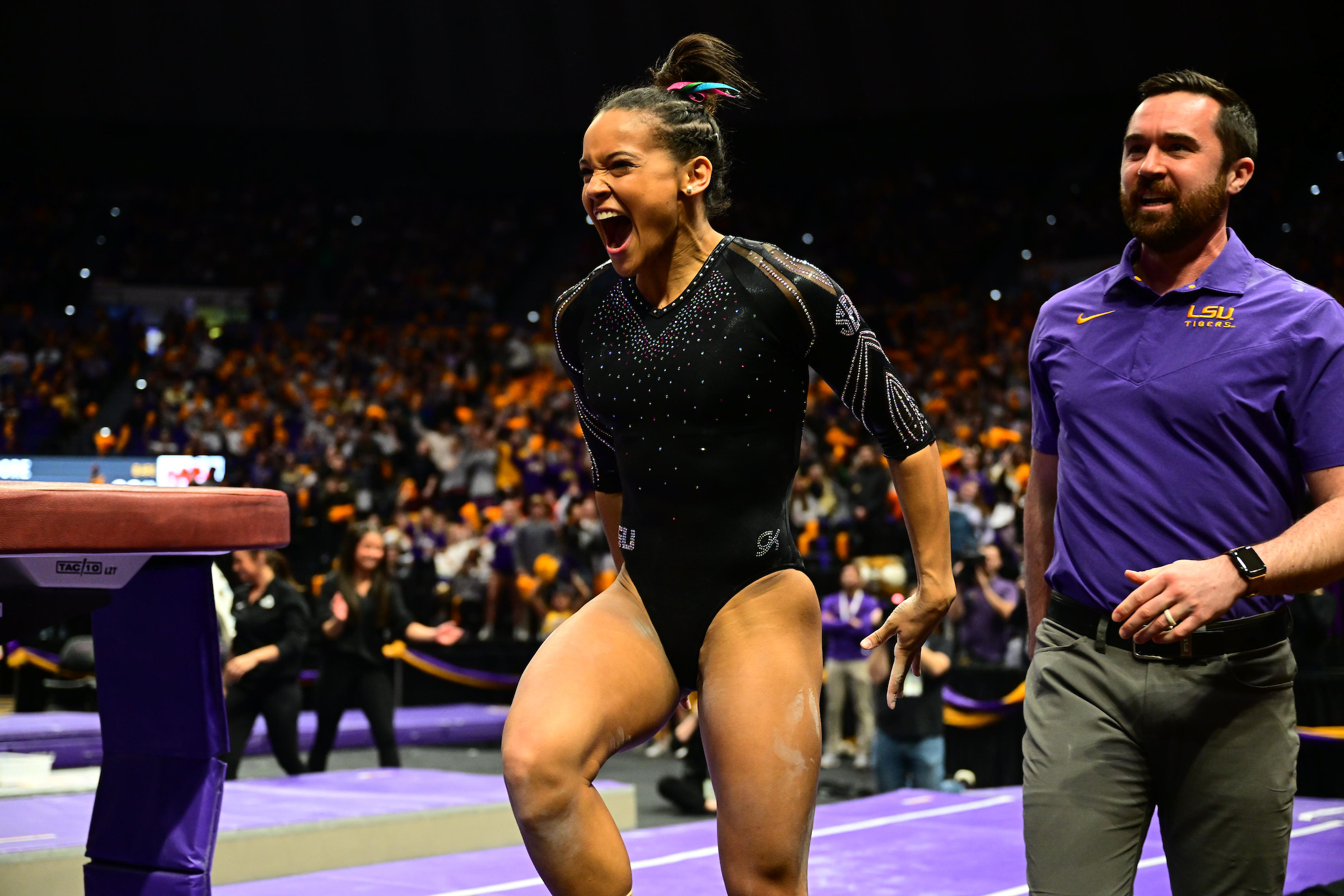 BATON ROUGE – The ninth-ranked LSU Gymnastics picked up its first win of the season against No. 12 Missouri in the PMAC on Friday night with a score of 197.150-196.525.

“Overall, I’m pleased. There was a lot of good that happened out there tonight. We got a win, but we have to be able to handle prosperity. When you start a meet out and you’re almost at a 99.000, you have to be able to put the hammer down, and I think that’s the lesson to come away with from tonight,” said head coach Jay Clark.

“I love this bunch. They’re gritty, and you’ve seen that over and over. They don’t quit and they understand that when a mistake happens, what happens next is the most important thing. I’m proud of who they are and I’m proud of their fight, but they also know we have to get better if we want to be the team we want to be.”

The Tigers started off hot on vault, scoring a season high 49.475 on the event highlighted by a perfect score from junior Haleigh Bryant in the anchor spot. Junior Elena Arenas led off with a strong 9.825 followed by senior Alyona Shchennikova who earned a 9.875. Junior Chase Brock scored a season high 9.850 in the third spot as well as sophomore KJ Johnson who scored a 9.900. Sophomore Aleah Finnegan added another 9.850 before Bryant anchored with a 10 to take the title.

The perfect 10 marked Bryant’s first of the season and sixth in her career.

In the second rotation, sophomore Alexis Jeffrey led off with a career-high 9.925 to set the tone and earn her first title on the event. Arenas followed with a 9.850 in the second spot. Sophomore Tori Tatum had a career night in her second ever routine and earned a 9.900. Finnegan added another 9.850 in the fourth spot and Bryant anchored with a 9.900.

LSU finished the second rotation with a 49.425 and held on to the lead as the squad transitioned to beam.

The home Tigers were able to bounce back after a rough start on beam as Finnegan anchored with a 9.950 to take the title for the night. It was a career high performance from the sophomore. Bryant stayed composed and added a strong routine in the fifth spot with her 9.900.

In the floor lead off spot, junior Sierra Ballard brought the energy with her 9.850 performance. Shchennikova followed with a strong 9.875 routine. KJ Johnson recorded a season high a 9.925 on floor and Bryant scored a season-high 9.950 to finish off the night in fashion and take the title.

Bryant earned her fourth-straight all-around title against Missouri, as she matched her career high with a 39.750. The junior also took the titles on vault and floor, moving her individual title total to 11 this season.

Shchennikova recorded a season-high 39.225 for her first appearance in the all-around this season.

Finnegan’s title on beam moved her total to three on the year.

The Tigers will be back in action on Friday, January 27, as the team hits the road to face Arkansas at 8 p.m. CT on the SEC Network.