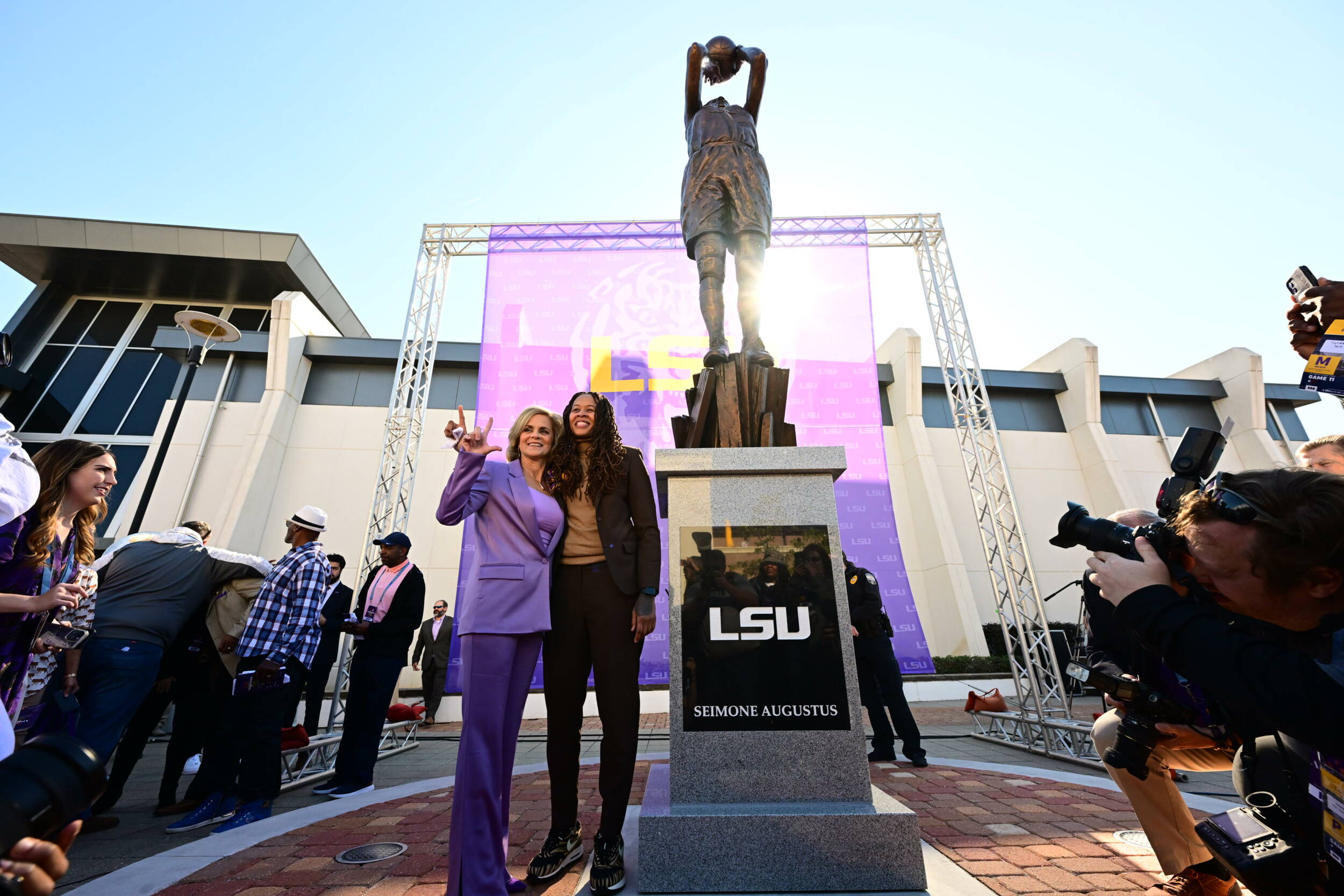 After giving a speech in LSU’s practice facility, Seimone Augustus second-lined to history.

Unbeknownst to Augustus, a brass band appeared and the celebration began, as she danced her way to become the first female athlete in school history to get a statue.

Waiting for her outside was a sea of purple and gold, with almost every brick between the LSU Gymnastics facility and the PMAC covered by Tiger fans eager to support one of their own.

“I just want to say thank you to everybody,” Augustus said. “It looks like all of Baton Rouge is here. This feels good. I had a teammate who used to say I didn’t do this by myself. Clearly with everyone here, I didn’t.”

The countdown began, the cover was removed, and her legacy was cemented, joining Bob Pettit, Shaquille O’Neal and Pete Maravich in the plaza for eternity.

“I hope I’ve made you all proud,” said Augustus. “To my Baton Rouge family, my LSU family, my Louisiana family, I love you.”

Standing beside her was Kim Mulkey, who just 375 days ago, had nothing but a vision when she walked into the Courtside Club press room, demanding Augustus get a statue one day. 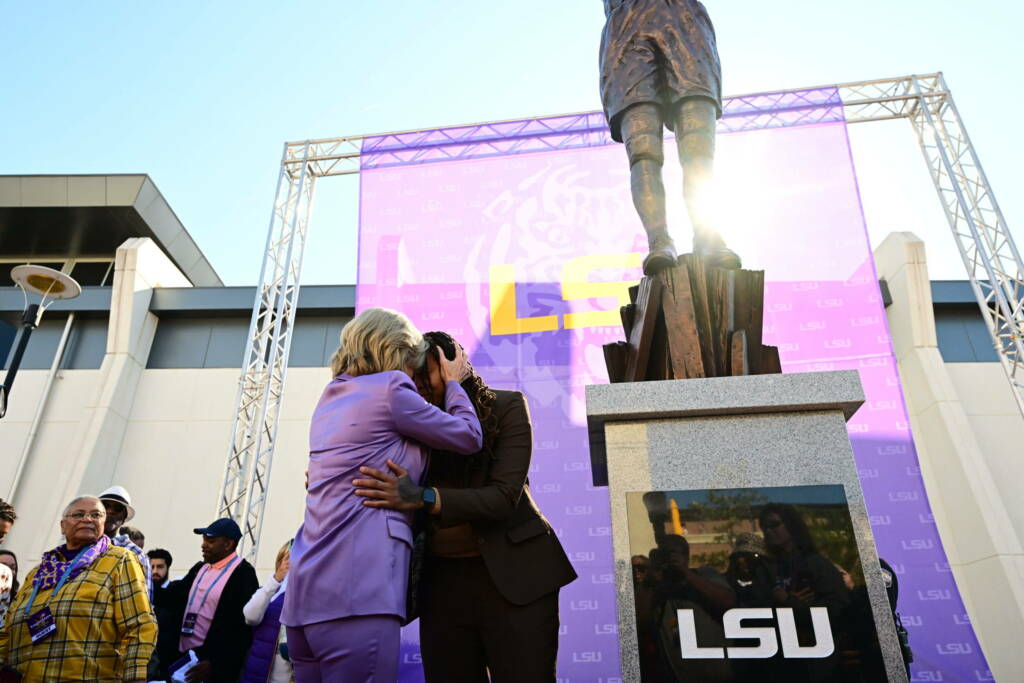 Before the unveiling, Augustus addressed families, alumni, media and athletic department staff at a reception in the practice facility.

Overlooking her speech was a mural of the late, great Sue Gunter, as she reflected upon the memories that made her time at LSU so unforgettable.

It wasn’t the facilities, nutrition centers, or even the victories that Augustus remembers. It’s the relationships, the support, the work, and the people that, like the statue revealed today, stand the test of time.

With Seimone at podium on day her statue being unveiled on @lsu campus, can’t help but see Coach Gunter in backdrop of this picture appearing to watch Seimone’s speech… pretty cool. @LSUwbkb @LSUsports pic.twitter.com/j5AFcEK9m0

But, on this historic day for LSU women’s basketball, it’s hard to not think about Gunter and her impact on one of the school’s most iconic and decorated athletes.

In April of 2002, Gunter and assistant coach Bob Starkey – also an assistant on Mulkey’s current staff – sat in front of the television waiting for the Capitol High superstar to make her college decision.

Admittedly, they had no idea where she was headed, as the anticipation grew inside their coaches lounge. But when Augustus took the podium wearing Tennessee orange, the announcement quickly felt anticlimactic.

“I will not repeat what Coach Gunter said,” Starkey joked.

It was at that moment that Augustus took the microphone and made her commitment: she was staying home.

From expletives to ecstasy, the orange shirt was exchanged for a purple one. They got their girl, who then athletic director Skip Bertman categorized as “the most important recruit in the history of our athletic department.”

“We knew we didn’t just get a great player,” Starkey said, “we knew our program was getting ready to change forever.”

When people ask Starkey for his favorite Seimone Augustus moments, his response usually surprises people. It wasn’t the games, although he remembers those, too. It was the practices. It was her obsession with being great and her understanding of the responsibility that comes with greatness. She didn’t just make the players better, Starkey says, she made the coaches better, forcing the staff to elevate the way they were teaching because they had never coached anybody like Augustus before.

“She changed the culture of our program by being a great competitor every single day in practice,” Starkey said. “People ask for my favorite Seimone moments and it’s practice, not games. Practices were amazing and it’s because she set the temperature.”

Her resume is undeniable, which includes 2,702 collegiate points, a No. 1 overall draft selection, a 15-year professional career, winning four championships, a 2011 WNBA Finals MVP, and three gold medals (2008, 2012, 2016) as a member of the United States Olympic Team.

Mulkey remembers recruiting Augustus from her days at Louisiana Tech. She remembers a quiet, soft-spoken Augustus whose talent was loud and clear. But, even as an in-state school, Mulkey knew Baton Rouge was where her heart lied. When it came to the recruiting process, it was no different: home is where the heart is, and LSU was home.

“Baton Rouge was home to her,” Mulkey said. “Family was important. I knew it would be tough. Honestly, I never thought we were in it. In my heart of hearts, I could never see her not playing for LSU.”

Written on the wall inside the practice facility reads: “respect the past and embrace the future.” Sunday at the PMAC embodied that creed as LSU respected its past in a monumental way, while embracing its future with a win over Auburn to move to 18-0 on the season – the best start in program history.

But today, Augustus says, was a celebration of everyone.

Today, her legacy was cemented. Forever.