No. 7 LSU With Program’s Best Start Following 67-48 Win At Kentucky 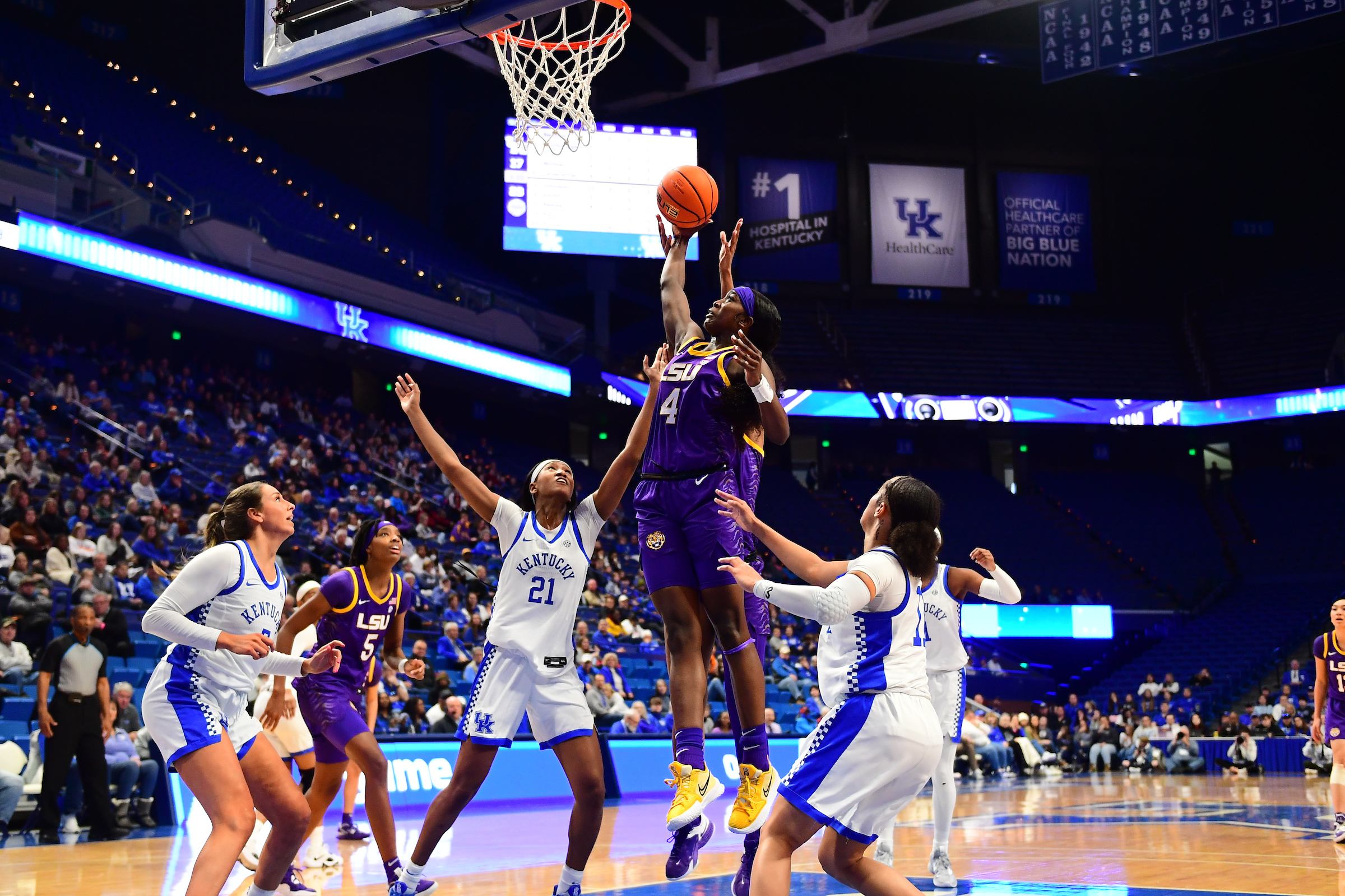 Standout freshman Flau’jae Johnson continued to impress as she was one point shy of her career high. Johnson tallied 26 points and 8 rebounds in a dominant win over Kentucky. The three-time and reigning SEC Freshman of the Week has a good chance of making it a fourth as she picked up right where she left off after scoring 18 points against Texas A&M on Thursday.

Angel Reese earned her 16th double-double in as many games and the longest streak of consecutive double-doubles to open a season in SEC history continued. After a historic performance against Texas A&M where Reese dropped 26 points and hauled in a LSU record 28 rebounds, Reese finished Sunday afternoon’s contest with 26 points and 13 boards. Reese has been on a tear as she’s scored 20+ points in 12 of the past 13 games.

The dynamic duo of Johnson and Reese combined for 52 of the Tigers 67 points as they led LSU to its best start in program history.

Guard Alexis Morris played her fewest minutes of the season with flu-like symptoms.

Kentucky duo, Maddie Scherr and Robyn Benton, led the way for the Wildcats. Scherr led the team with a career high 22 points and 4 made threes, the most of her career. Benton was the only other Wildcat in double figures who followed with 11. No Kentucky player had more than five rebounds, Nyah Leveretter had 5 and four players had 4.

The Tigers will remain on the road as they travel for a road game Thursday night to take Missouri at 6 p.m. CT in Mizzou Arena. LSU will be returning home to host Auburn next Sunday and Seimone Augustus’ statue will be unveiled prior to the game.

The Tigers went on a 5-0 run to start the game and earned a 13-5 lead at the first timeout four minutes into the opening quarter. The Wildcats cut the LSU lead to 3 after a trey from Scherr and a driving layup by Cambridge made it 15-12. After starting 5-6 from the field, LSU went 0-6 after the timeout and got stuck in a scoring drought that lasted about four minutes until Reese made two free throws with six seconds left in the quarter to take a 17-12 lead after one. LSU went 88-percent (7-8) from the foul line in the first quarter. Reese and Johnson led the team with six points each ahead of the second quarter.

Both teams started slow in the second and it wasn’t until four minutes in when Reese gave the Tigers its first two points of the quarter. LSU traded buckets with the Wildcats and looked to gain momentum just before the media timeout when Johnson went coast to coast weaving through defenders to push LSU past 20. The Tigers led 21-17 at the media timeout. Johnson  picked up right where she left off to make it a 6-0 solo run and gave LSU a 8-point lead. A 12-0 run by LSU forced a Kentucky timeout after the Wildcats went 1 of its last 9 field goals and was caught in a 4:38 scoring drought. The Tigers held UK to just 5 points in the second quarter and went onto the break up 31-17.

The third quarter got off to a competitive start as UK outscored LSU 9-8 four minutes into the quarter. The Tigers scored half its third quarter points from the charity stripe and its other half was split by Johnson and Reese. LSU led Kentucky 39-26 at the first media timeout of the quarter. After the timeout LSU went on an 8-0 run and took advantage of 3 UK turnovers within that run. With half a minute to go in the third Reese picked up her tenth rebound and earned her 16th double-double in as many games this season. LSU ended the quarter as it converted a full court play in the final four seconds as Johnson inbounded the ball across court to Reese who finished inside just before the buzzer.

The final quarter was another tight race as LSU hung on to the lead it had built up. UK outscored LSU early in the quarter and did its best to shorten the Tiger lead. The Wildcats were led by Scherr who had 12 fourth quarter points and headlined a late 7-0 UK run. The Tigers continued to take advantage of their time from the free throw line as they went 7-9 from the stripe in the fourth. Despite ending the quarter 5 of its last 6, the highest scoring Kentucky quarter (21) wasn’t enough to catch the Tigers.