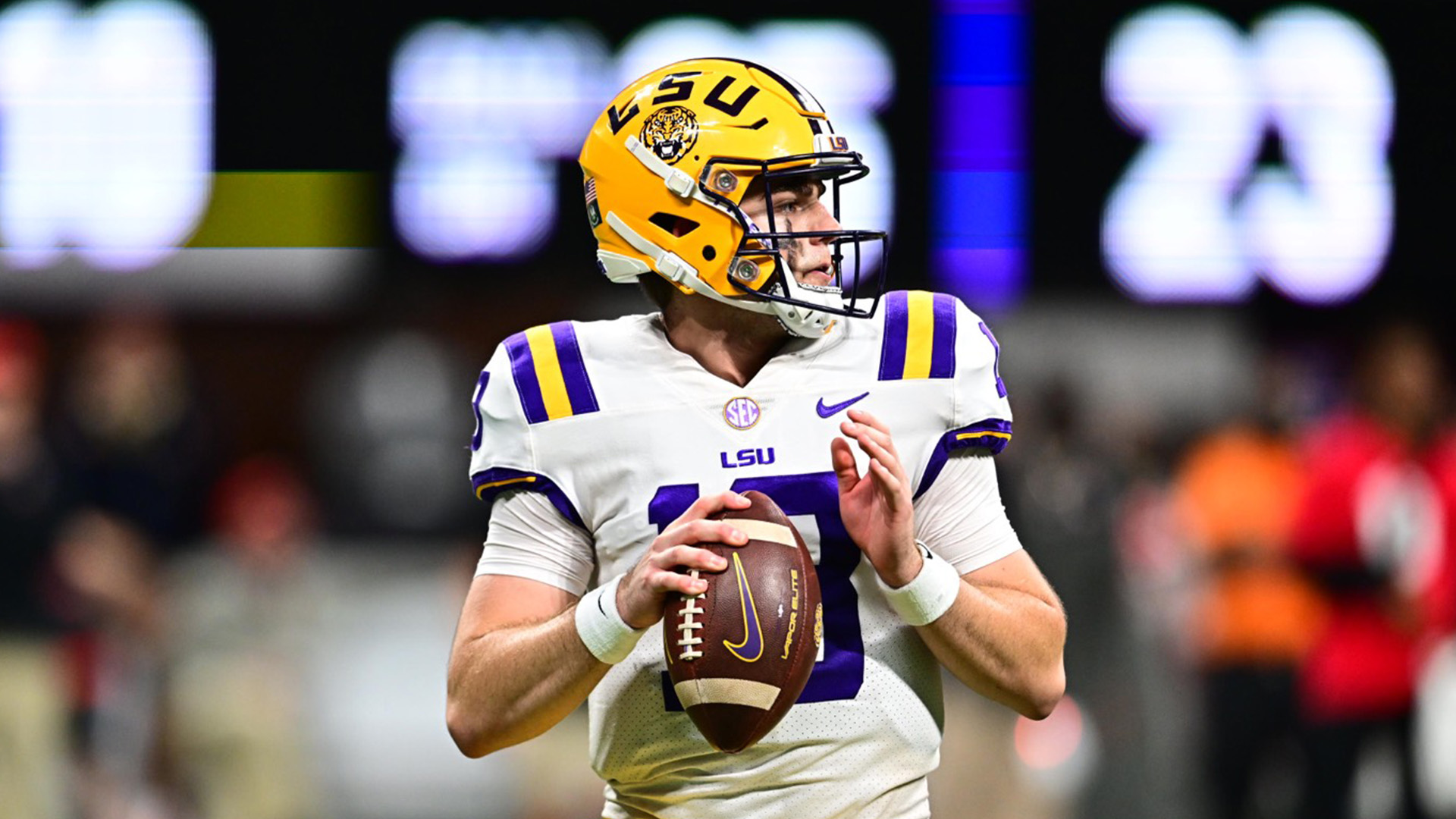 ATLANTA, Georgia – Stetson Bennett completed 23-of-29 passes for 274 yards and four touchdowns to lead No. 1 Georgia past No. 14 LSU, 50-30, on Saturday at Mercedes-Benz Stadium.

LSU falls to 9-4 on the season. The Tigers will now await their bowl destination, which will be announced on Sunday.

Quarterback Garrett Nussmeier provided a spark for the offense in replacement for an injured Jayden Daniels, finishing 15-of-27 for 294 yards passing and two touchdowns.

On LSU’s opening drive, Daniels found Jaray Jenkins on 3rd-and-3 for a 9-yard completion and a first down. However, that would be all for the Tigers as Daniels’ pass to Boutte on third down from the LSU 46 fell incomplete, forcing a Jay Bramblett to punt to the UGA 21.

The LSU defense responded with a three-and-out. On 3rd-and-4 from the Georgia 27, Bennett had time to throw but the Tigers had great coverage, forcing an incomplete pass and a punt.

On 3rd-and-9 from the UGA 29, Daniels found Brian Thomas Jr. for an 18-yard connection to put the Tigers in business at the Bulldog 7. That was as close as they would get as the Tigers were forced to kick a field goal as Daniels was sacked for a 9-yard loss by Chaz Chambliss.

Damian Ramos’ field goal attempt was blocked and returned by Christopher Smith 96 yards for a touchdown to give Georgia a 7-0 advantage with 3:33 left in the first quarter.

Daniels and the LSU offense responded quick with a 53-yard touchdown reception over the middle of the field to Kayshon Boutte, tying the game at 7 with 2:21 in the first quarter.

Georgia reclaimed the lead with a quick seven play drive that spanned 75 yards, culminating in a Brock Bowers 3-yard touchdown reception. UGA led LSU 14-7 with three seconds left in the quarter. The Tigers outgained the Dawgs 158 to 76 in total yards as the first quarter concluded.

On the first play of the second quarter, Daniels’ pass attempt to Jack Bech was intercepted Jack Mondon, as the ball ricocheted off Bech’s helmet into Mondon’s hands, which was returned 3 yards to the LSU 22. Bennett took advantage of the turnover by finding Ladd McConkey for a 22-yard touchdown on the next play from scrimmage.

Jack Podlesny’s 43-yard field goal attempt hit the right upright and fell no good, spotting the ball at the LSU 33.

Georgia added to their lead as Bennett found Darnell Washington over the middle of the field for a 14-yard touchdown, extending the Bulldog lead to 28-7 with 2:48 remaining in the half.

On their next offensive possession, Bennett found Dillon Bell for a 3-yard touchdown pass with 32 seconds to play in the half. Georgia led LSU, 35-7.

With 11:24 to play in the third quarter, Bennett fumbled on the exchange to his running back, which was recovered by Jaquelin Roy at the LSU 43.

Nussmeier entered the game for Daniels and completed two passes that led to a quick scoring drive. Nussmeier found Boutte over the middle for a 20-yard completion to the USA 37, then found Nabers for a 34-yard touchdown reception, cutting the deficit to 35-17 at 10:33.

Nussmeier stayed hot, connecting with Nabers for a 59-yard pickup over the middle of the field on the next drive, advancing the ball to the UGA 14. However, on 4-thand-inches, Williams was stopped short for no gain, forcing a turnover on downs with 7:59 to play in the third quarter.

The Bulldogs answered back for their first score of the second half as Kenny McIntosh rushed up the middle for a 2-yard touchdown, extending the Georgia lead to 42-17 at the 3:32 mark. The drive almost covered the length of the field, going 95 yards on eight plays, spanning 4:27.

Williams busted open a 54-yard rush over the middle of the field, advancing the ball to the UGA 11. On the next play, Georgia was penalized for pass interference, moving the ball to the 2. Williams punched it in for a touchdown to make it 42-23. The two-point conversion was unsuccessful as Nussmeier’s pass to Thomas fell incomplete in the back of the end zone.

The Bulldogs added to their lead as McIntosh rushed right for an 8-yard touchdown with 13:13 to play. Mitchell’s pass to Washington was good on the two-point conversion, making it 50-23.

Nussmeier continued his impressive performance by escaping pressure and finding Jenkins on 4th-and-10 for a 33-yard touchdown connection, cutting the deficit to 50-30 with 7:12 to play.