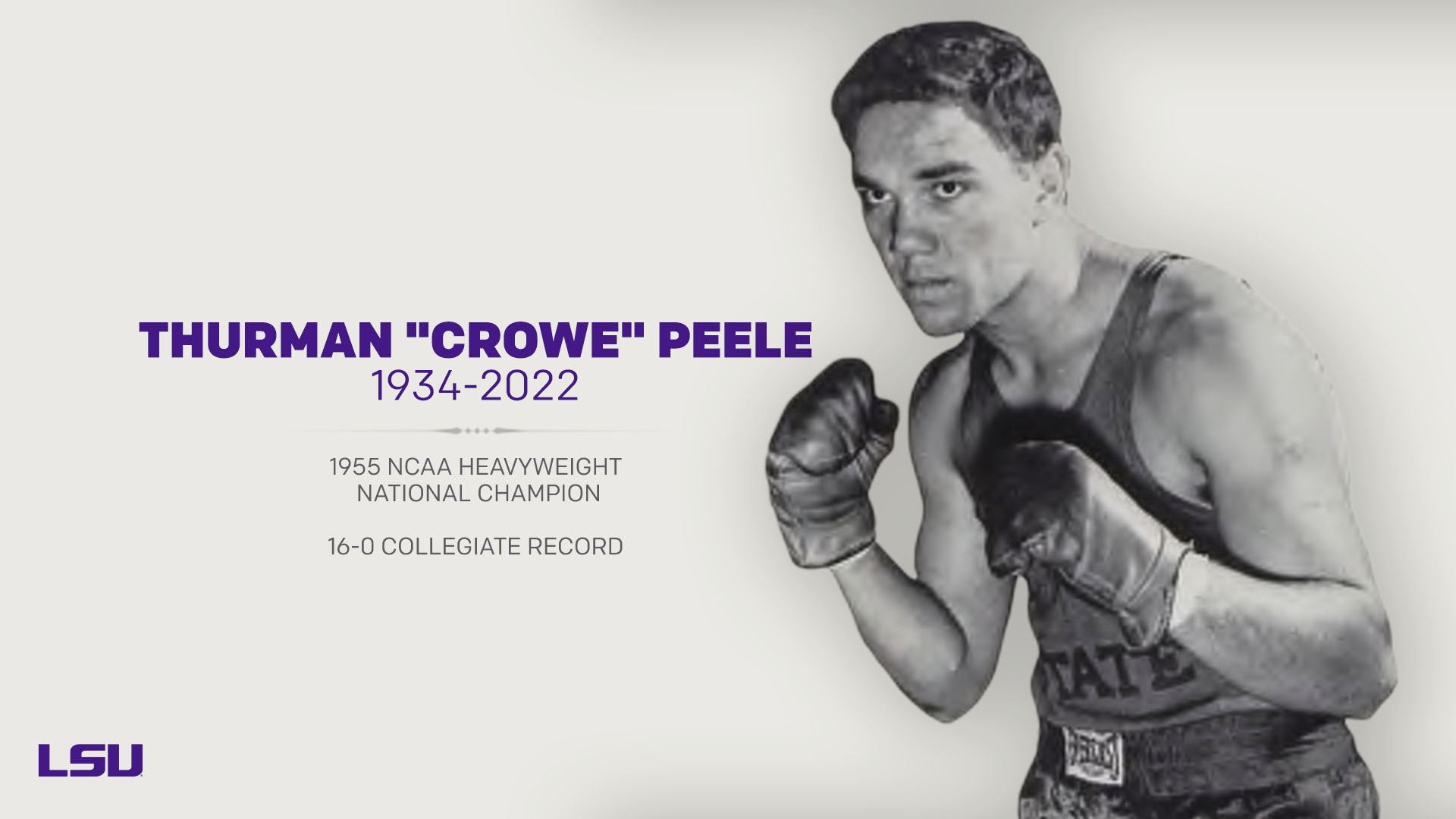 BATON ROUGE – One of the names synonymous with the history of LSU’s successful boxing teams of the late 1940s and 1950s, Thurman “Crowe” Peele, passed away this week at the age of 88.

Peele was the 1955 NCAA Boxing Champion representing the Tigers.

Born in Fayetteville, North Carolina, Peele made a name for himself in the Carolinas in the Golden Gloves program fighting along with his older brother Bruce against prominent boxers such as Floyd Patterson, the two-time world heavyweight champion. Crowe was a four-time Golden Gloves champion in North Carolina.

He boxed twice in the national Golden Gloves tournament in New York City, losing in 1951 in a split decision to Patterson and the next year to coming heavyweight contender Harold Carter. Those were his only losses in 64 pre-college bouts.

Peele took up boxing when he was 12 as “something to do” he said in a previous interview. He also played football and baseball at Fayetteville High.

Peele, after his high school graduation, committed to the University of South Carolina, but when the school dropped boxing, he packed his things and boarded a bus for Baton Rouge.

Peele never lost a match in his two years at LSU, winning Southeastern Conference and Sugar Bowl titles as a freshman in 1954 before repeating as conference champ in 1955. Peele won 16 collegiate bouts.

That was the year he won the top title in collegiate boxing, the NCAA championship, making him college boxing’s premiere heavyweight champion as a sophomore. In Pocatello, Idaho, he defeated Bob Hinds of Wisconsin, who was in the finals for the second straight year.

After winning the title, the chance to earn money for a sport he had great success was too much for him to remain an amateur. He left LSU to fight professionally.

A couple of those fights happened in Baton Rouge, one at Memorial Stadium. Peele defeated Chico Lopez in the second round after knocking him down three times. It was thought that former LSU star would have the edge in an outdoor fight in sultry Louisiana weather but the temperature had dipped to below freezing by fight time. In his other fight here, he knocked out Cordon Pouliot in 145 of the second round.

Peele would eventually settle again in Baton Rouge and operated service stations around the city, including some 18 years on the corner of State Street and Highland Road in Tiger Town.

Crowe is survived by his wife of some 55 years, Betty. His four children: son Jason Peele, and daughters Robbie Peele, Monica Peele Geiger and, Nancy Peele.

The services are scheduled for Resthaven Gardens of Memory and Funeral, on Saturday (Dec. 3). Visitation will be from 11 a.m.-Noon with the funeral service starting at 12:15 p.m.