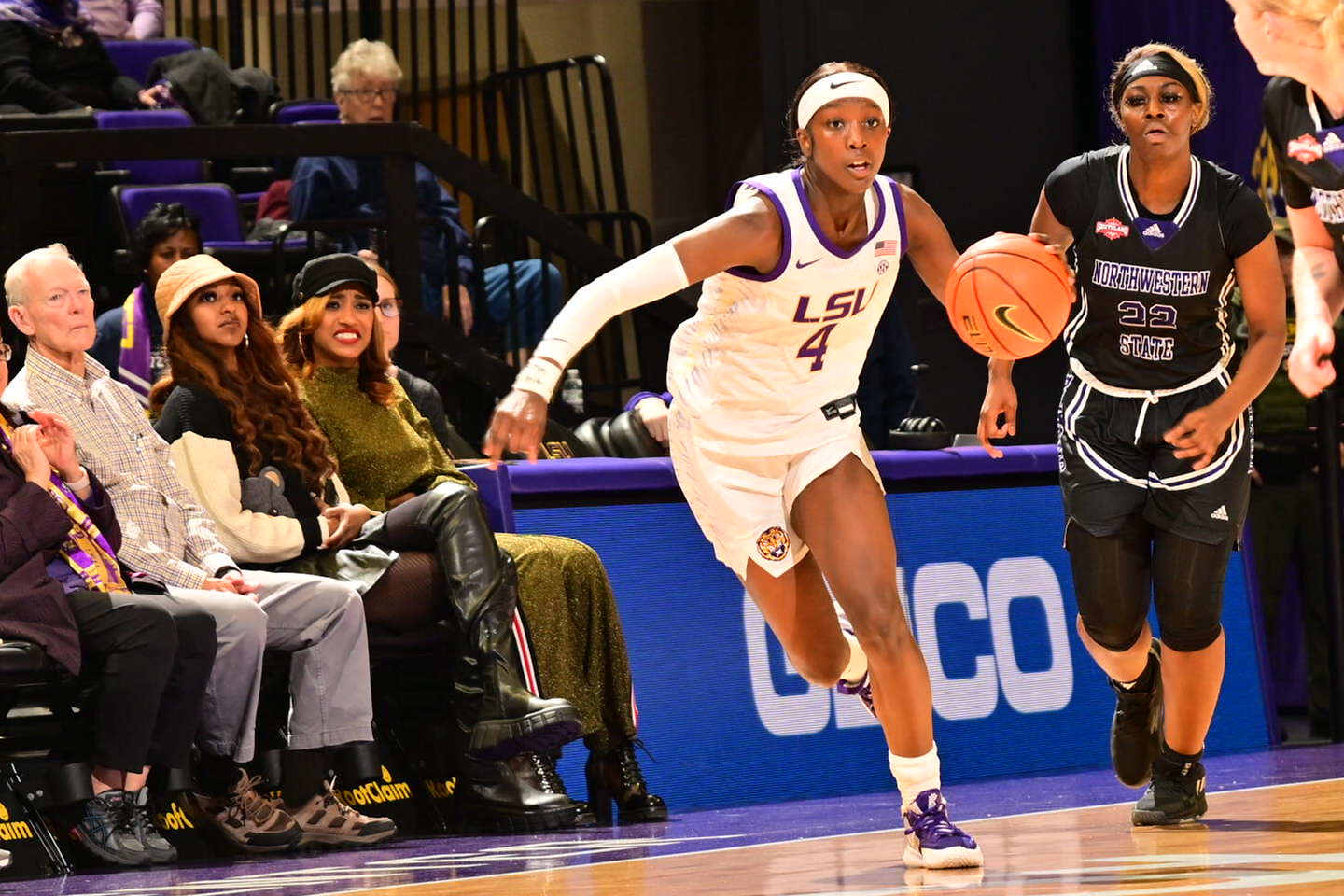 BATON ROUGE — No. 15 LSU (5-0) defeated Northwestern State (1-3) on Sunday afternoon as the Tigers scored 100 points for the fifth game in a row and cruised past the Lady Demons in a 100-45 victory in the PMAC.

With LSU’s fifth consecutive 100-point game, it was believed that LSU had tied the NCAA DI record for consecutive 100-point games. It was fact checked and confirmed though after the game, the Louisiana Tech team that Kim Mulkey played on in 1981-82 scored 100+ in six straight games during the first season the NCAA sponsored women’s basketball. Mulkey and the Lady Techsters went on to win the first ever NCAA Women’s Basketball National Championship.

The Tigers will hit the road for the first time this season as they head to the Bimini, Bahamas over Thanksgiving for the Goombay Splash where they will face George Mason and UAB. LSU will kick things off in Bimini on Thanksgiving at 1 p.m. CT against George Mason on FloHoops.

Freshman Flau’jae Johnson led the Tigers as she scored a career-high 27 points in her first ever double-double, adding 10 rebounds. Johnson made an impact all over the court as she also led the Tigers in assists (5) and steals (6).

Angel Reese scored 23 points and had a career-high 19 rebounds in her fifth straight double-double through five games this season. She has had at least 15 rebounds in each of the past four games.

“Angel Reese is the definition of a player that just makes you want to be better,” Johnson said. “I’m a freshman, but a lot of people are looking for me to do great things and I want to challenge myself to do great things.”

Alexis Morris followed with 17 points, 3 assists, and went a perfect 4-4 from the free throw line. Freshman, Sa’Myah Smith scored in double figures for the second time this season as she ended the day with 11 points and 5 rebounds.

Northwestern State was led by Jisell Woodson who came off the bench to score 15 points, making two threes. Other point leaders were Shelby Rayner with nine and former Tigers Sharna Ayres who both had 8 for the Lady Demons.

The Tigers finished shooting 49-percent from the field and 33-percent from behind the arc. LSU out rebounded NSU 56-27 and scored 56 points in the paint, compared to the Lady Demons 16. LSU finished with 18 steals and 7 blocks.

LSU got off to a 14-5 lead through the first six minutes of play led by Morris (5) and Reese (4). Morris added to the momentum when she pulled up from the top of the key to sink her lone three-pointer of the game. A tough three-point play from Smith sparked a 12-2 run late in the first quarter and LSU ended the quarter with a 23-12 lead.

Johnson led the Tigers to start the second quarter as she had 7 points, 3 rebounds, and 2 steals all in the first four minutes of the quarter. With three minutes before the half Reese brought down her tenth board of the night, securing her fifth double-double through her first five games as a Tiger. LSU ended the quarter on a 13-3 run and improved its lead to 60-25 heading into the half.

Three minutes into the third quarter Johnson broke the 20-point mark for the first time in her career as she made two three-pointers within 18 seconds of each other.  The Tigers extended the lead to 49 as great ball movement led to a wide open Jasmine Carson three pointer, her first of the contest.

The Tigers were just 11 points away from the century mark to begin the fourth quarter. With just 28 seconds left the PMAC crowd of 5,318 erupted as Carson hit a three to put the Tigers at 100 points in their fifth straight game.