Micah Baskerville's resilience and selflessness have been rewarded in his final season as a Fighting Tiger. 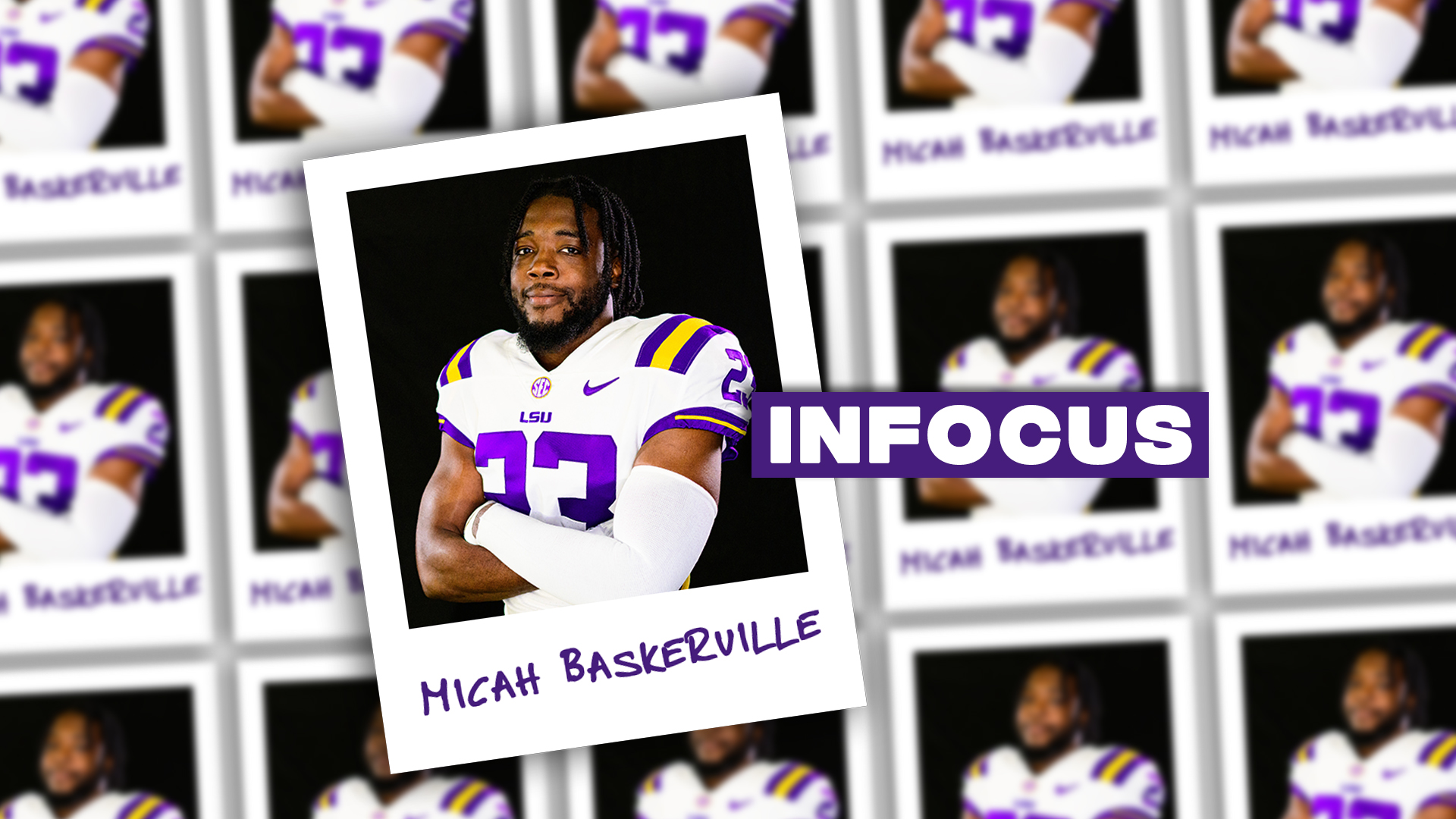 “Block out the noise” has become a cliché in the sports world.

Regardless, Micah Baskerville might be the best example of it.

Three months ago, the fifth-year senior from was working out in the sauna that is the summer in Baton Rouge, La., working day in and day out for his final season. No matter how much he was pushing himself, the world saw him as counted out. He was labeled “low on the depth chart,” and with significant talent coming in, Baskerville was not high on anyone’s radar.

Prior to this past summer, Baskerville made a decision that perfectly sums up his character, and kickstarted his campaign of proving everybody wrong.

Brand new coaching staff, brand new team, and no answer for how many snaps he would play.

Micah Baskerville (noun):  a selfless team player that is limited by nothing.

During fall camp when the noise is loudest, Baskerville channeled what he had learned from experience and focused on leaving no doubt about his ability in his coaches’ and teammates’ minds.

“It made me grind harder,” Baskerville said of the public’s opinions. “I wanted to show that for when I was able to play, I should be on the field. So, whenever I was on the field, I made plays, I was fast to the ball, I did everything.”

Baskerville, a Shreveport, La., native, sacrificed playing time throughout his entire career, as he was learning from current NFL stars Devin White, Jacob Phillips, Patrick Queen and K’Lavon Chaisson. Just when it seemed like it would be his time, everything was changing.

So, why didn’t he leave?

Because that would have been the easy thing to do, and nothing Baskerville does is easy.

“I feel like I could have gone somewhere else and played, but I wanted to start here, where the best of the best play,” Baskerville explained. “I knew I could do it; I knew I was capable enough to do it. I wasn’t going to run from any challenge, so I was going to sit here and wait it out.”

Speaking for every LSU Tiger fan, the football team and the coaching staff, thank goodness he did.

LSU coach Brian Kelly has frequently commended Baskerville for playing so consistently, and for adding an important dimension to the defense. Others label him as the “classic LSU linebacker,” and refer to the defense as “Baskerville’s defense.” Needless to say, Baskerville rose from an uncertain factor to the piece that holds it all together.

“It’s something I have always wanted since I’ve been here,” Baskerville explained. “I have always wanted to take over and be a great LSU defense. I have seen guys do it, and I felt like it was going to be my time one of these times. I don’t want to let my fans down or my family down, and I knew I was going to get it. I just had to work hard for it and it’s going to pay off.”

Baskerville could spend his time talking about how he, individually, has proved everybody wrong, but that is the furthest thing from his mind. Instead, he always brings it back to the team. He is never, ever first.

Although being a part of the 2019 team that won a national title was special, Baskerville holds this season closest to his heart because of how resilient the group has been.

“The 2019 year was a crazy one, but I’ll say this year stands out most to me because of how I feel about our team,” Baskerville said. “We put a bunch of guys together, and we’re trying to make a team from a new staff, new everything. For the success we’ve had, it’s hard to do. It’s hard to be top in the country in your coaches’ first year, when there’s a bunch of new players put together. We’re making it work.”

A significant reason why it works is because of Baskerville’s ability and willingness to support all of his teammates. As a linebacker, he believes knowing not only his position, but everyone else’s is what makes him elite. He is the safe place and the sounding board for all 11 guys on defense. Even though he could have left for the NFL or another school, Baskerville has always been all in for his brothers and for LSU.

“I wanted to come back and put LSU back to how we were: a winning school, winning that championship,” Baskerville said. “I know what it took to do that because I’ve seen it. I want to leave here being one of the great teams that played here. Making sure guys are doing what they’re supposed to be doing, like I saw Jacob, Patrick, Devin and K’Lavon doing.

“Bringing that mentality is important because not a lot of people on our team have won a championship, or know what it takes. I want to take the knowledge that I have and give it to them, so that even if we don’t win this year, they have the blueprint for it.”

Baskerville gives so much of himself to his teammates, but also credits them for all they give to him. In the midst of the uncertainty during fall camp, his teammates kept him grounded.

“Being with them every day, they helped me get through it,” Baskerville stated. “Them keeping me strong and having faith in God worked it out for me.”

His resilience and selflessness will not go unrewarded, and neither will the countless hours, blood, sweat and tears he has put into football. For Baskerville, it’s impossible to give up on something he put so much time and effort into. And it helps that when he plays football, he feels like a superhero.

A superhero that wants to change his family’s life.

A superhero that wants to give his kids the things he didn’t have when he was young.

A superhero that never thinks about himself before his teammates.

And a superhero that can block out the noise, put a whole team on his back, and never fail to deliver.