Louisiana native Joe Foucha is flipping the script on his life story. 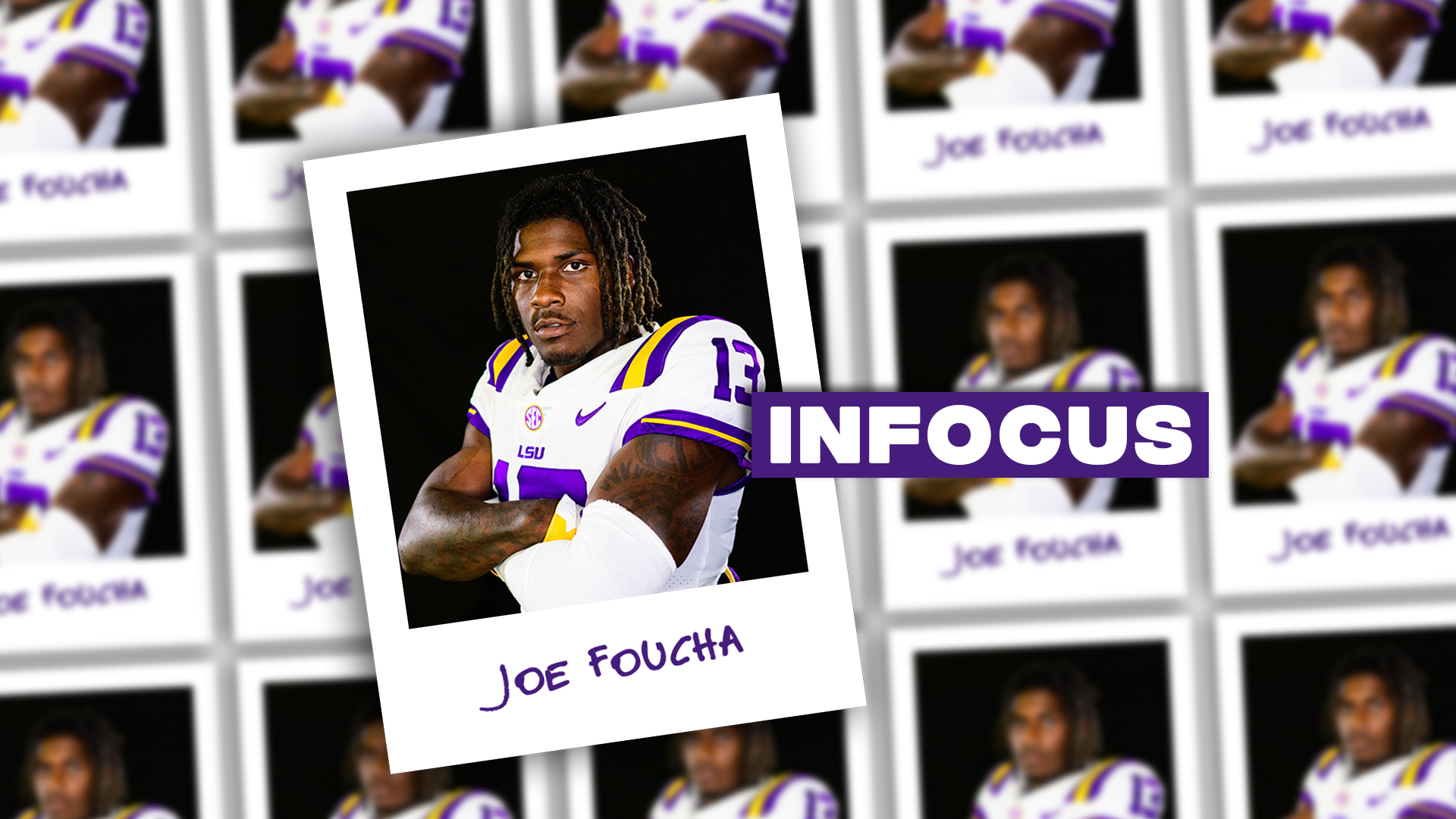 The tattoo of a Chuckie Doll on his right arm suggests otherwise. As does his fearless, tenacious, relentless play on the field.

Even though he doesn’t like scary movies, he has lived through a few of them.

Trace up his right arm, and another tattoo lives there. This one means a little more, but it details the first scene of a movie he did not ask to watch.

The youngest sibling in his family, Foucha lost his oldest brother when he was only four years old. Now 23, the ink on his chest serves as his brother’s tribute, and the 19 years in between have written Foucha’s story.

Young Foucha dreamed of being a basketball star, so much so that two more of his tattoos pay homage to it. Basketball was his focus at McDonogh 35 High School in New Orleans, despite playing quarterback, running back and wide receiver for the football team. In his freshman season, Foucha gave up playing quarterback and fully committed to basketball. However, his football coach had other plans for the next scene of the movie that was becoming Foucha’s life.

Giving his high school coach the director’s role proved to be one of Foucha’s best decisions. He was recruited by top college football programs, including LSU and Arkansas. Instead of staying home, Foucha chose to experience the unknown. So, he became a Razorback.

Throughout four successful years in Fayetteville, Foucha matured as a player and as a man. Perhaps it is that growth that led him to make his own decision for the next scene: homecoming.

For Foucha, his family is everything; they keep him going. It was hard for them to see him play at Arkansas, so combining the atmosphere at Tiger Stadium and his family ties, the decision was not much of a decision. Foucha would be a Tiger for his fifth and final season.

Fall camp initially symbolized a new beginning and the start of Foucha’s full-circle conclusion to his college career. However, academics and the NCAA eligibility system took over the director’s role, and crafted another challenging scene.

As Foucha transferred his credits from Arkansas to LSU, there were complications that not even an appeal could fix. Although Foucha had faith everything would work out, that hope was short-lived. Citing credit transfer issues, Foucha was ineligible to play for the first four games of this season.

“I was emotional,” Foucha said, reflecting on when he found out about the suspension. “I got a lot of tears out. But, after that, I man’d up. I went to the scout team, and was still preparing for every game like I could play. Sitting out brought back memories of when I would come to Death Valley to watch games when I was in high school. But, now I was on the sidelines, so I was holding my emotions in and supporting my teammates. I wanted to be out there every game that I was out, and the atmosphere made me want to be out there even more. I was catching chills.”

By preparing so diligently during the suspension, Foucha showed only a glimpse of how much of a fighter he is. Once he got back on the field against Auburn, he was thrilled to be back doing what he loves, but he was not satisfied with his performance. It’s hard to see past his relentless work ethic, his big smile and his soft brown eyes, but it was the things he was hiding behind those things that make his movie not only scary, but a real-life nightmare.

His best friend, safety Greg Brooks Jr., describes him as an “extrovert that’s all over the place,” but Foucha muted that side of himself for a moment.

Before he reveals it, the superstar shifts in his chair, hesitates a little, and his eyes show exhaustion from the painful scenes they have lived through. A commanding presence on the field, Foucha begins to speak softly, which innocently captures all attention.

“I was dealing with a lot of adversity toward the end of camp,” Foucha said. “My grandma passed away, one of my best friends passed away, and then I found out about the suspension. That brought me to a place where I was like, ‘What do I do?’”

He lost his brother, his grandmother, and his friend, and he couldn’t do the one thing that would take it all away for at least 60 minutes.

In spite of it all, this is when Foucha becomes the director of the movie.

“I had to still keep going because this is my last year, so I can’t just stop or take days off,” Foucha said. “I had to still come to practice every day and focus on school. After the four-game suspension, it took me a while to get back because I was dealing with a lot. A lot of people don’t know that, but that’s why I kind of got off to a slow start. After things started rolling for me, these last few games I’ve been playing well. I feel like being able to be strong through those moments prepared me for these games coming up.”

The nightmare is over, and the next scene belongs in a Marvel movie because Foucha resembled Superman.

On October 22, a then-unranked LSU took on a then-ranked No. 7 Ole Miss in Death Valley. It was a close contest, until Foucha had something to say about it.

He knew somebody had to make a play, so much so that he could not get that thought out of his head. With LSU up by four points and Ole Miss on offense, Foucha held his position as he watched the quarterback, Jaxson Dart, call the snap. He watched as Dart turned toward the sideline to set up the fade to his receiver. Foucha took off, and the rest is, quite literally, out of a superhero movie.

“Micah Baskerville, my guy, my twin, he got in there and forced the throw,” Foucha explained. “I was looking at the ball in the air, and I was like, ‘Oh! It’s going short!’ I kept running, saw it was coming close and I said, ‘I gotta get this, I gotta get this.’ So, I put my hand out and I knew if I was close enough to touch it, I was going to pick it.”

And he did, with a catch that made him look like an NFL Top-10 receiver.

That play changed the game, and LSU went on to dominate the Rebels with a 45-20 win. Two weeks later, the Tigers carried that momentum to take down a national championship favorite, the Alabama Crimson Tide.

Foucha’s interception was perfectly timed, not only for the Tigers, but for him personally. He needed something to go his way after all he had endured over the last few months, and there was nothing better than being able to do his favorite thing on the field: get a pick.

“I love hitting people, making big plays, being able to turn the swag on,” Foucha said about his position. “But, it’s definitely a different feeling when you get a pick.”

“I’ve been in the SEC for four years,” Foucha said. “When we’re in tight games, that’s when my experience takes over. Even though we’re backed up, we still have to get off the field. Pushing guys every day in practice, having that mentality and playing my role is all it is for me. I just do my job.”

Doing his job on and off the field has not only ended Foucha’s nightmare, but has also positioned his team to see a dream come true. Foucha hopes to be remembered for wanting to come home and make plays for the team that he has always wanted to see win.

Foucha is not done directing his own movie yet, but another line of ink on his right arm foreshadows how it might end.

His nightmares were full of evil, but he chose not to hear it, speak it, or see it.

And he’s not about to start.