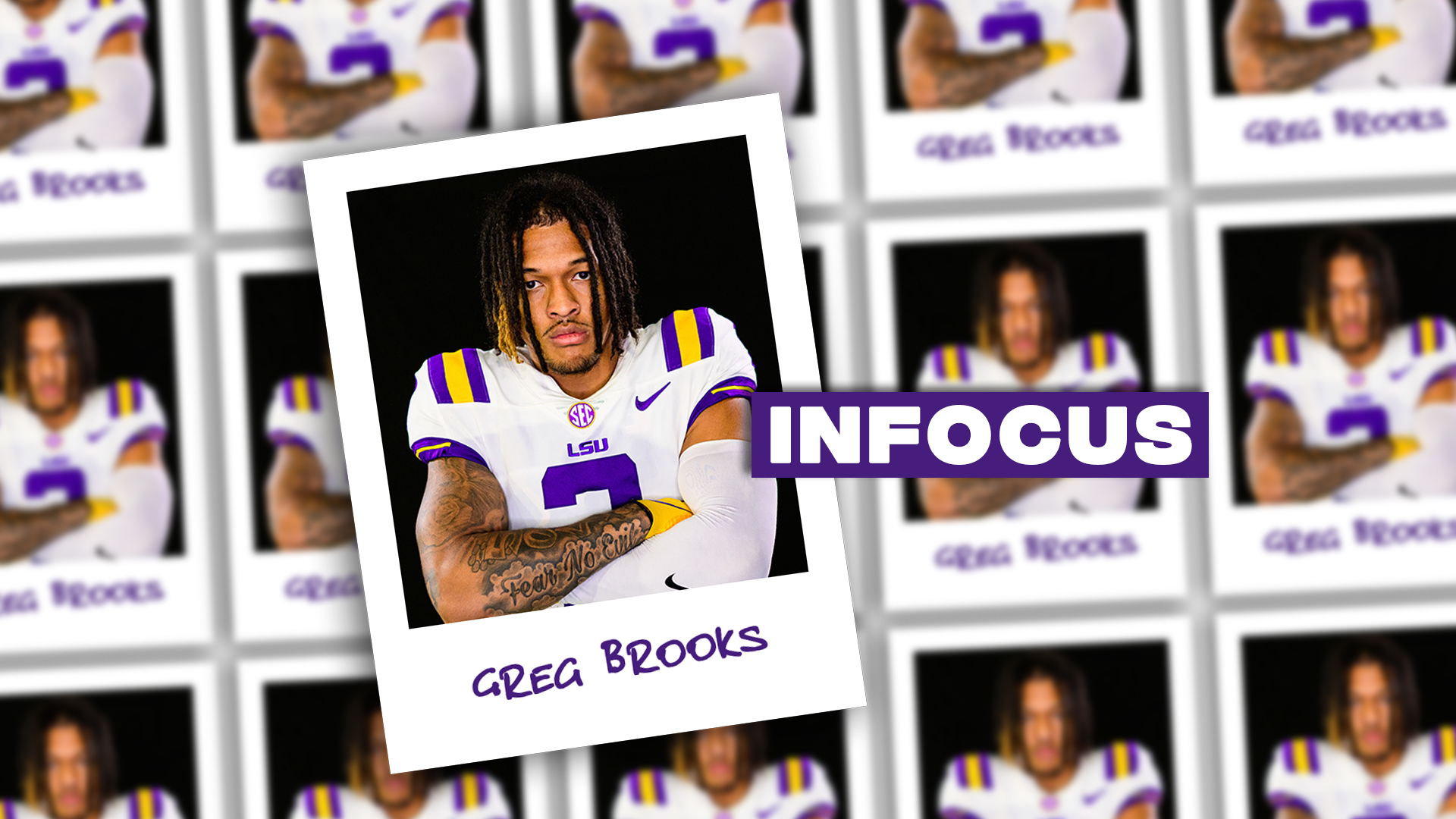 Every time Greg Brooks Jr. laces up his cleats, the thoughts of his father, Greg Sr., as an NFL player nearly two decades ago ignites his explosive playmaking in the LSU defensive backfield.

Unlike most collegiate athletes, Brooks Jr.’s football career didn’t begin until his freshman year of high school. He developed a passion for football as he learned about his father’s experiences with the Bengals in the NFL. Greg Sr.’s experiences caused his son to develop an attitude of perfection as he knew that one day, he wanted to make it to the NFL and be “better” than his dad.

Perfecting his craft was something that Brooks Jr. always strived for growing up. Whether he had a good game or bad game, he would always ask his father for advice regarding “what he could have done better,” as he valued the advice of the former NFL cornerback.

After receiving his first collegiate offer at the end of his freshman year at West Jefferson High School in Harvey, La., Brooks Jr. made a promise to his mother, “You are not going to pay for college.”

Going into his sophomore season, Brooks Jr. set greater expectations for himself as he wanted to play on one of the grandest stages in college football, the SEC. He recorded 40 tackles, 13 pass breakups, four forced fumbles and an interception. Attributing his success to “working out every day,” the dedication paid off as Brooks Jr. received his first SEC offer after his sophomore year.

Once colleges started to realize his talent and offers came pouring in, Brooks Jr. was starting to have fun and enjoy his passion for the game. During his junior season, he recorded 55 tackles and five interceptions, and he was confident that not only would he keep his promise to his mom, he was taking steps in the right direction to achieve his dream and become an NFL superstar.

According to Rivals and ESPN, Brooks Jr. ended his high school career as a four-star prospect, ranked as the 35th cornerback in the nation and the 18th overall player in the state of Louisiana. As signing day quickly approached, Brooks began to face an obstacle that had not been an issue throughout his high school career, his size.

Despite receiving offers from multiple SEC programs, Brooks Jr. heard that he was “too small to play in the SEC.” After decomitting from Mississippi State, he decided to attend the University of Arkansas, where he set out to prove he belonged in the SEC, despite the negative comments about his stature.

Although becoming a Razorback meant leaving his family behind, he knew that he had to make this ultimate sacrifice in order to be closer to accomplishing his goals of getting to the NFL.

In his first collegiate season, Brooks Jr. started all 12 games for the Razorbacks. At the nickelback position, he played 515 snaps in 2019. In his debut season, Brooks Jr. recorded 25 total tackles, three pass breakups, a quarterback hurry, and his first collegiate interception came on November 9 against Missouri. Although his freshman season didn’t go quite as well as he had hoped for, during the off-season Brooks Jr. got back into the gym to perfect his craft with the intent of proving he belonged in the SEC.

During his sophomore year at Arkansas, Brooks Jr. played in nine games, starting in eight of them. He logged the sixth-most tackles on the team with 39, including 22 solo stops. He also recorded two interceptions, returning one for a team-best 79 yards, and the other for a touchdown in the Razorbacks win over Mississippi State.

Slowly but surely, Brooks Jr. was gaining confidence in his play making abilities and became a leader in the Razorbacks’ secondary. At the end of a 48-tackle junior season in 2021, he entered the transfer portal. The question was raised, “What’s next for Greg Brooks Jr?”

Brooks Jr. was a hot commodity and had multiple offers on the table when looking for his new home. In the end, he decided to return home to Louisiana for his senior season and become an LSU Tiger; however, his mission remained the same – being better than his dad and making it to the NFL.

Playing at LSU is personal for Brooks Jr.; being closer to home means his family has been able to watch him play in every home game. It’s a source of motivation, as he “always want to put on a good performance for his family.”

While at LSU, Brooks Jr. has transitioned from nickel back to safety, describing the transition as a “smooth.”

“Wherever I can best benefit my team, that’s where I want to be,” Brooks explained.

As his position changed mid-season, Brooks Jr. admitted that the switch has helped him grow and communicate better in the secondary.

Since joining the LSU program, Brooks Jr. has demonstrated that he is a player that belongs in the SEC. He’s recorded 39 tackles, including 17 solo stops, four pass break-ups, and a huge, drive-stopping interception at Auburn, which led to an LSU victory on October 1.

Returning home for his senior season and playing in front of his family at Tiger Stadium has been a blessing for Brooks Jr., who credits his success from high school until now to his family and his faith.

“As long as I worked hard, I knew God would take care of the rest,” Brooks Jr. said.

He seeks to continue his explosive playmaking in the secondary as a Tiger, and in the future, fans will look forward to hearing, “The next pick in the 2023 NFL Draft – safety Greg Brooks Jr., LSU.”