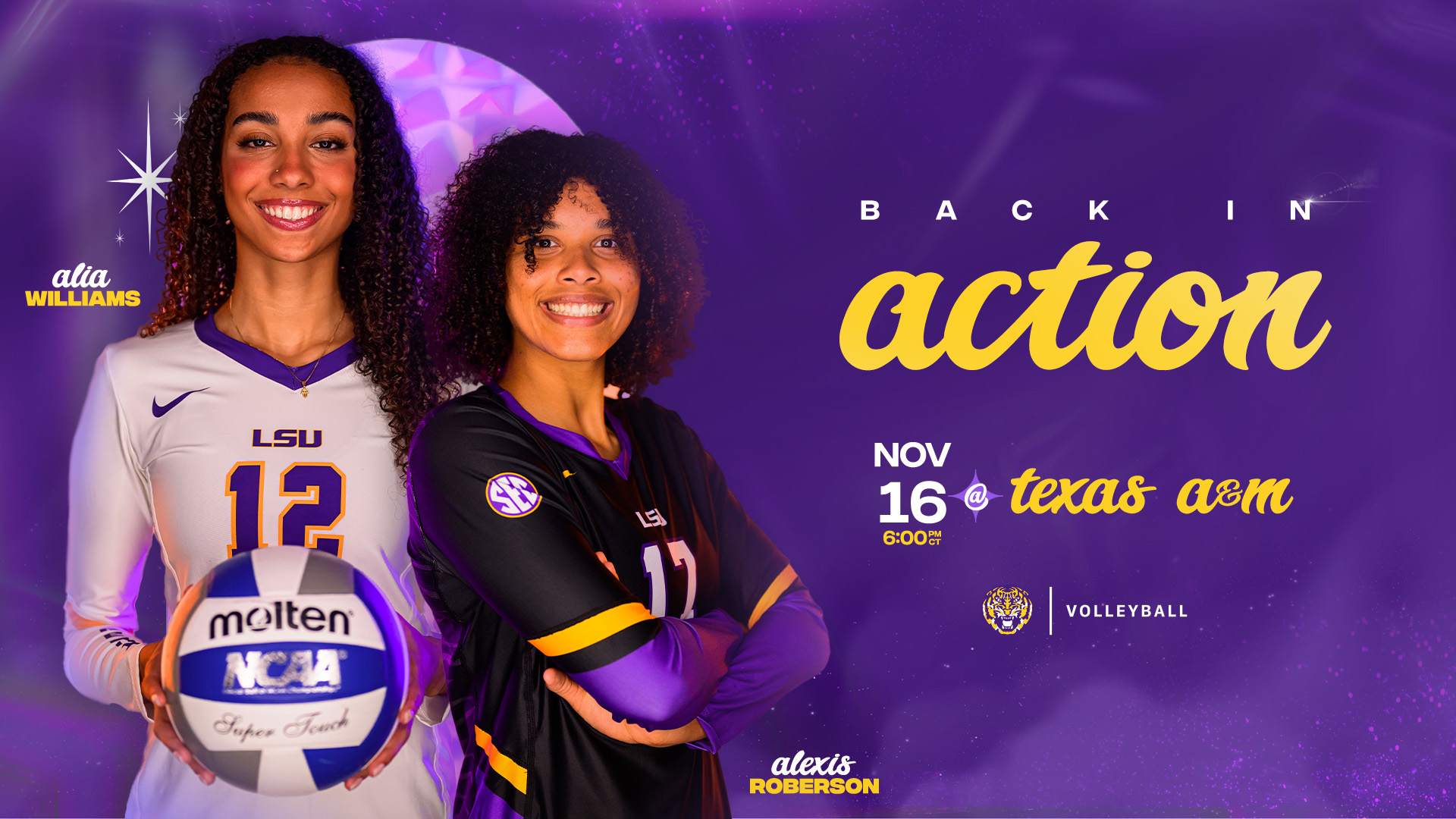 BATON ROUGE, La. – LSU will play its final road match of the regular season when they take on Texas A&M at 2 p.m. Wednesday, November 16 at Reed Arena in College Station, Texas.

Outside hitter Sanaa Dotson leads the team with 3. 67 kills per set and 24 aces on the season and adds 42 blocks to her statistics. Outside hitter Paige Flickinger follows with 2.58 kills per set and has 18 aces and 2.59 digs per set. Flickinger is coming off her seventh double-double this season, while Dotson leads the team with eight double-doubles.

Libero Ella Larkin sits atop the SEC with 4.38 digs per set (447 total) and is 51 digs shy of breaking into the top 10 of the program’s record book for the most digs in a single season (Raigen Cianciulli No. 10 at 498 total digs). Larkin has accumulated four 30-plus dig performances this season and has 14 aces.

Setter Josie Vondran ranks No. 10 in the conference with 6.53 assists per set and contributes 90 kills, 50 blocks and 12 aces. Freshman setter Maddie Waak has registered 4.38 assists per set to go along with 16 aces and has three double-double this season. Middle blocker Anita Anwusi leads the team with 1.12 blocks per set (114 total) and has collected 181 total kills on the year.

Although Texas A&M is nursing a four-match losing streak, they have come away with impressive SEC wins this season, including defeating Ole Miss and Tennessee to start league play 2-0, and knocked off then No. 16 Kentucky and South Carolina later in the season. The Aggies are hitting .237 on the season behind 12.90 kills and 12. 15 assists per set. They also average 1.28 aces per set. Defensively however, opponents have hit .223 this season. A&M ranks No. 5 in the SEC with 2.41 blocks per set and has dug 13.19 balls per set.

Freshman outside hitter Logan Lednicky and graduate outside hitter Caroline Meuth ranks fourth and fifth in the SEC with 4.03 and 3.94 kills per set, respectively. Middle blocker Madison Bowser leads the conference with an efficient .417 attack percentage and had 0.92 blocks per set (92 total), but middle blocker Molly Brown leads the team with 1.17 blocks per set (90 total) in just 77 sets played. Setter Elena Karakasi sits fifth in the SEC with 9.99 assists per set.

LSU trails Texas A&M in the all-time series, 18-30 although the Tigers defeated the Aggies last season in Baton Rouge.