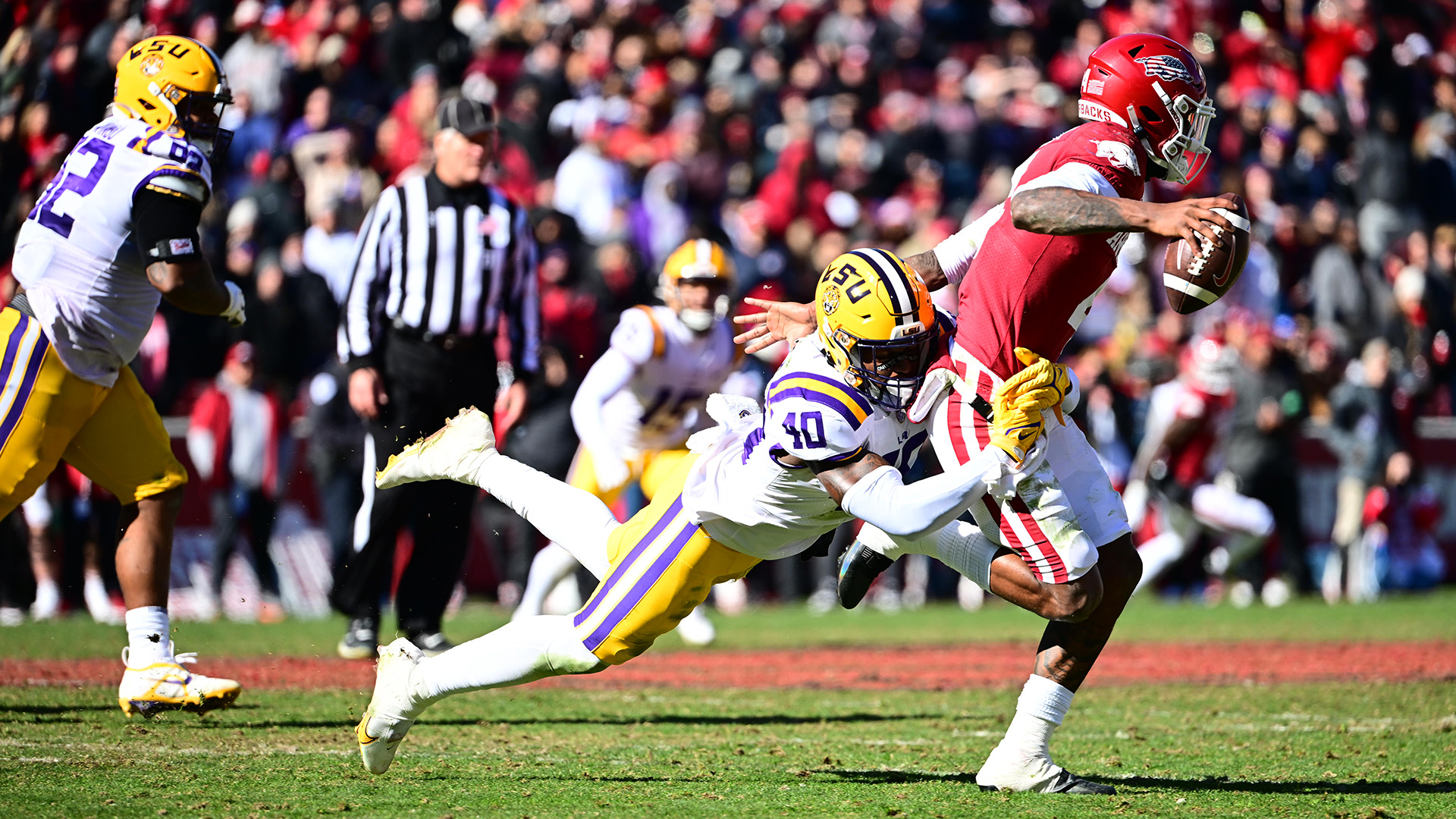 The Tigers return to action on Saturday, Nov. 19, when UAB comes to Tiger Stadium for the Senior Tribute. Kickoff is set for 8 p.m. CT on ESPN2, with pregame on the LSU Sports Radio Network starting at 6 p.m.

Tickets are available now at www.LSUtix.net.

Perkins was a dominant force against the Hogs, recording eight tackles, four for loss, four sacks, two forced fumbles, one pass break up and a quarterback hurry.

Greg Penn III led the unit in tackles with nine. BJ Ojulari had seven tackles, too, along with a quarterback hurry.

Josh Williams tallied a career-best 122 yards on 19 carries, averaging 6.4 yards per touch, with a touchdown. The LSU rushing attack posted 198 yards total on the game.

With Alabama’s 30-24 win over Ole Miss on Saturday, the Tigers have clinched a birth in the SEC Championship game as Western Division Champions.

LSU will play in its seventh SEC title game against the SEC Eastern Division representative in Atlanta’s Mercedes-Benz Stadium on Dec. 3 at 3 p.m. CT on CBS.

On 3rd-and-18 from LSU’s own 27-yard line, Williams picked up a first down on a 20-yard rush. However, that was all on the drive as Daniels was intercepted by Latatvious Brini at the Arkansas 43.

The Tigers forced a quick stop on a three-and-out after Ojulari stoped Malik Hornsby for a one-yard rush up the middle on 3rd-and-6.

Cam Little put the Razorbacks on the board first with a 28-yard field goal. Arkansas led 3-0 with 4:48 remaining in the first quarter.

Hornsby rushed left, but was stopped by Perkins, who forced a fumble that was recovered by Ojulari at the Arkansas 37.

Damian Ramos knocked through a 38-yard field goal attempt, making it 3-3 with 9:28 left in the half.

John Emery Jr. opened up LSU’s next offensive possession with a 32-yard gain over the middle of the field, setting up a a 29-yard field goal with 1:51 left in the half from Ramos to give the Tigers their first lead of the game at 6-3.

LSU and Arkansas combined for 53 pass yards in the first half. The Tigers found  some momentum in the running game, rushing for 104 yards on the ground in the first 20 minutes.

On 4th-and-2, Ojulari and Ali Gaye sacked Hornsby for a 12-yard loss, forcing a turnover on downs at the Arkansas 40 with 7:16 to play in the third quarter.

Daniels found Kayshon Boutte for a 26-yard completion to put the Tigers at the Arkansas 1-yard line. Williams punched it in for the first touchdown of the game, making it 13-3 LSU with 5:25 left.

On 3rd-and-17, Cade Fortin found Matt Landers for a 29-yard pickup over the middle of the field. A few plays later, Fortin rushed for a 17-yard gain to the LSU 38. Fortin then found Landers again for a 40-yard touchdown pass with 13:17 remaining to make it 13-10.

On first down, with 8:34 to play, Daniels found Nabers for a 12-yard connection and first down to the LSU 29. On 3rd-and-7, Dnaiels found Boutte for a six yards, just short of the marker. The Tigers went for it on fourth down, but Williams was stopped for no gain and a turnover on downs.

On 3rd-and-10, Perkins forced an incompletion at the LSU 40. The Hogs punted the ball down to the LSU 12.

With 1:19 remaining, Perkins forced another fumble from Fortin to secure the victory.