Soccer Downs Lamar 3-1, Advances to Second Round of NCAA Tournament 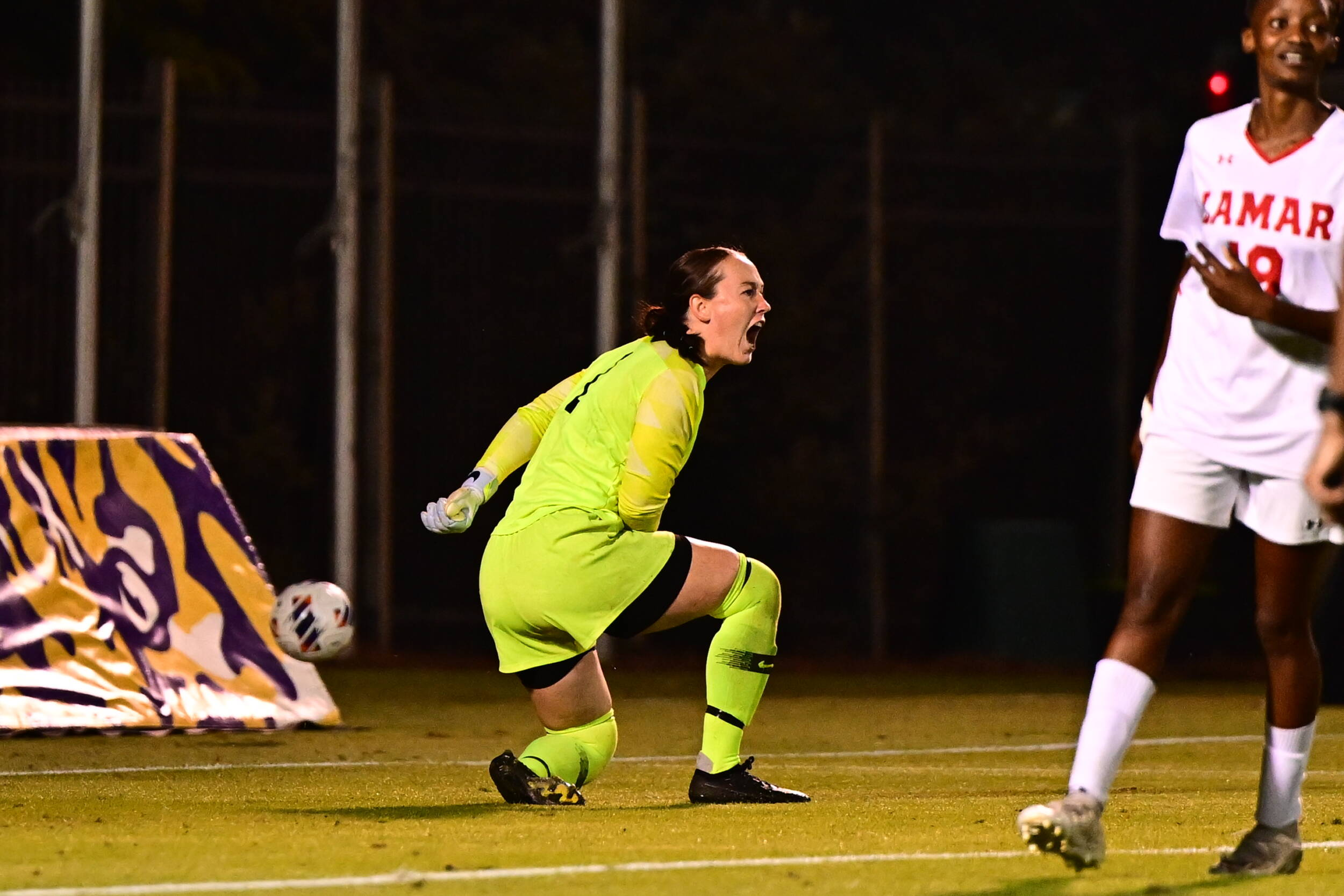 BATON ROUGE –  The No. 8-seeded LSU soccer team was victorious on Friday night as they took down the Lamar Cardinals, 3-1, inside the LSU Soccer Stadium to advance to the second round of the NCAA Tournament.

The Tigers opened the scoring in the 32nd minute as midfielder Ida Hermannsdottir marked her return from injury with a goal and she placed the ball into the back of an open net. The lead was doubled eight minutes later as goalkeeper Mollee Swift stepped up to the penalty spot and drilled a shot into the left corner.

LSU’s third and final goal came in the 64th minute as midfielder Brenna McPartlan headed home a cross from six yards out. Lamar grabbed one back in the 81st minute as Christine Kitaru beat Swift in a one-on-one by rolling the back into the bottom-right corner.

“I am just absolutely thrilled. What a great performance by the team,” said head coach Sian Hudson. “It was a professional performance. We managed the ball really well and we scored three really great goals. Overall, we were the better team for the larger portion of the match. Lamar tested us in the first 20 minutes or so and forced us to make tactical changes early on, but after that we got a hold of the ball and were comfortable and created various opportunities from that point forward.”

The match opened with both teams getting early looks on goal. Cariel Ellis had a shot on goal in the 7th minute that was calmly collected by Swift for her first save of the night. Seconds later at the other end, Hermannsdottir tested Lamar’s Nicole Panis with a long range shot that required a save. Panis made her second save just a minute later as she stopped forward Mollie Baker’s ground shot from distance.

After battling in midfielder throughout the half, LSU found the back of the net in the 32nd minute. Forward Angelina Thoreson sent a through ball down the right flank to Baker. Baker picked up the ball and outpaced her defender before charging into the box and sending a ground cross across goal to Hermannsdottir, who footed it into the back of an open net. Hermannsdottir’s goal was a team-high seventh of the season for the freshman, who missed LSU’s last two matches due to an injury. For the creators, Baker tallied assist number six on the season while team assist-leader Thoreson was credited with her eighth of the year.

Momentum swung LSU’s way and the Tigers did not look back the rest of the way. In the 40th minute, forward Taylor Dobles was fouled in the box by a Cardinal defender and the referee pointed to the penalty spot. Swift ran across the field and grabbed the ball before stepping up to the penalty spot. The LSU goalkeeper sent a powerful shot to the left corner to beat Ellis, who guessed the right way, to give the Tigers a 2-0 lead. The goal is Swift’s first of the season and her second of her career after scoring a penalty kick at Kentucky last season. The goal was the final major event of the first half and the Tigers went into the halftime break up by two.

What can't Mollee Swift do?

LSU opened the second half in control of the match and remained on the attacking foot. Alesia Garcia had a shot narrowly off target in the 48th minute and Baker tested Panis in the 51st minute with a shot on goal. Lamar’s Laura Linares tested Swift in the 59th minute with a powerful shot from outside of the box, but it was caught by the outstretched goalkeeper to keep the Cardinals scoreless.

The lead became 3-0 in the 64th minute as defender Olivia Wilkes sent a perfect cross on a free kick from just outside the box to McPartlan, whose header bounced under the crossbar and into the goal. McPartlan’s goal was her second of the season while Wilkes’ assist was her first as a Tiger.

Despite the lead, the Tigers continued their attacking onslaught, registering shots on goal in the 74th, 75th, 78th, 80th and 82nd minutes. Panis finished the night with 10 saves, a season-high for the Lamar Cardinal who only gave up two or more goals in a match just two times this season.

Against the run of play, Lamar grabbed a goal in the 81st minute. Kitaru disposed a Tiger defender in midfield and broke away through on goal. She found herself in a one-on-one with Swift and slotted home a ground shot from 15 yards out past the onrushing goalkeeper and into the back of the net.

In the final seconds of the match, Lamar was awarded a penalty after a foul in the box. Kitaru stepped up for Lamar to take the penalty, but her shot to the right side of the goal was saved by a diving Swift to keep the match at 3-1 as time expired. The save was Swift’s third and final of the night.

The Final Save From @MolleeSwift

LSU outshot Lamar by a margin of 22-6, with the Tigers having 13 shots on goal compared to the Cardinals’ four. In the possession battle, LSU dominated by a margin of 61% to Lamar’s 39%. Following an even start to the first half, the Tigers struck first and did not look back as they dominated the rest of the match.

The win is LSU’s third win at the NCAA Tournament in program history and the first under head coach Sian Hudson. The three goals mark the second-highest number of goals in a single NCAA Tournament game for LSU, trailing only LSU’s 7-0 win versus Arkansas-Pine Bluff in 2009.

LSU will head to Tallahassee, Florida to take on the Florida State Seminoles in the second-round next weekend. Details on the match to come.