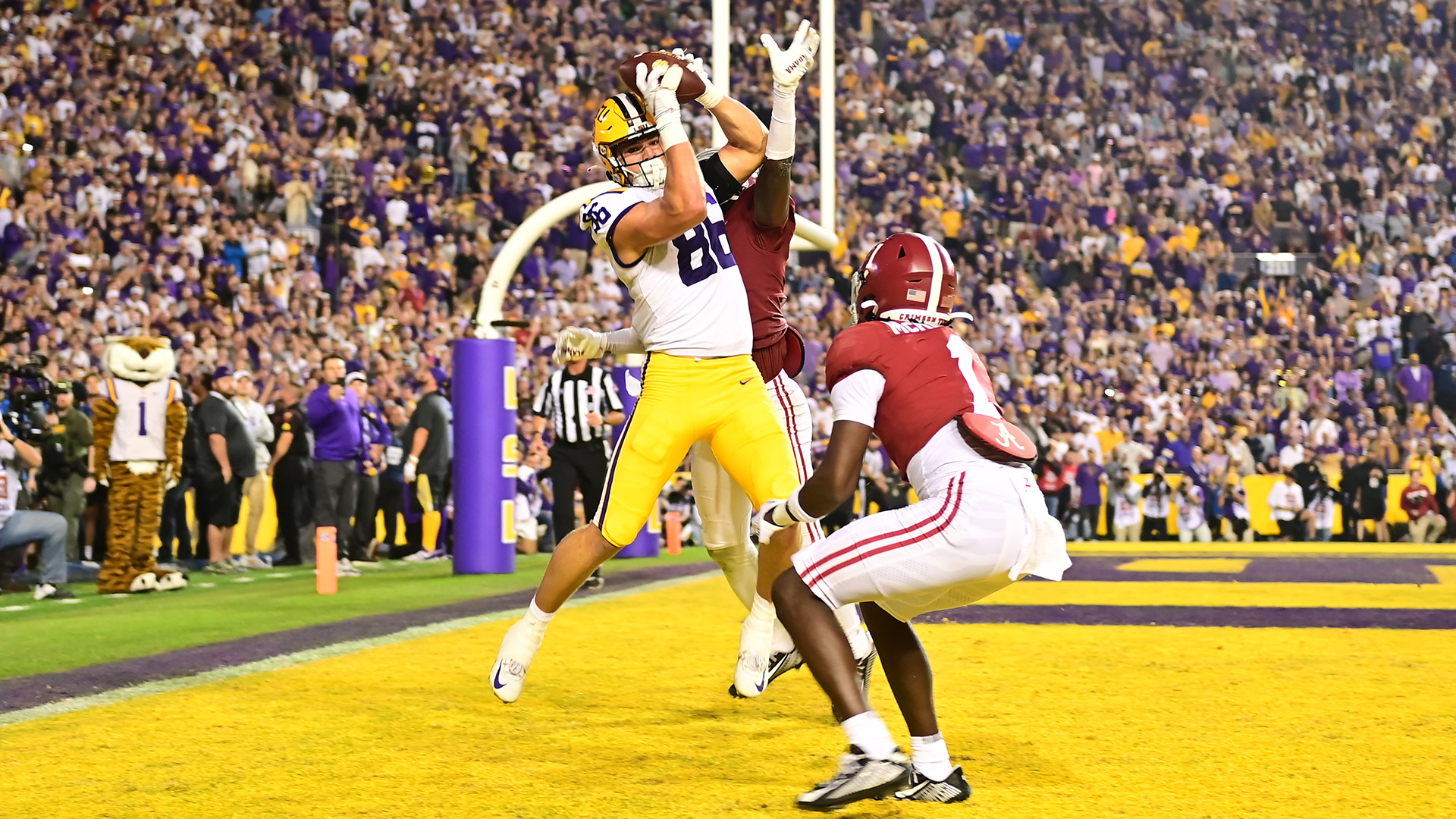 BATON ROUGE — No. 10 LSU saw an opportunity to beat No. 6 Alabama. The Tigers didn’t pass it up.

Instead, first-year head coach Brian Kelly elected to attempt a two-point conversion while trailing 31-30 in the first overtime period in the south end of Tiger Stadium.

LSU quarterback Jayden Daniels didn’t hesitate, sprinting steps to his right and completing the 3-yard pass to freshman tight end Mason Taylor, who scored just inside the front-right corner of the end zone to send the crowd into a frenzy, spilling onto the field.

Alabama won the toss and deferred to the second half.

On 3rd-and-6 from LSU’s own 33-yard line, Daniels found Malik Nabers for a six yard reception and a first down. Alabama was penalized for roughing the passer, which added an extra 15 yards to the end of the catch. Nothing came from the drive as the Tigers were forced to punt on their first possession.

Bryce Young found an early rhythm, connecting with Ja’Corey Brooks for a 19-yard completion on the opening play of the drive for Alabama, then again to Cameron Latu for a 21-yard pickup to advance the ball to the LSU 45. Threatening inside the red zone, Young avoided pressure, but was picked off by Jarrick Bernard-Converse in the end zone.

On LSU’s next offensive possession, Daniels found Emery for a 4-yard gain, picking up an added 15 yards after the Tide were penalized for a personal foul. However, on 3rd-and-11 from the Alabama 44, Daniels’ pass to Jenkins fell incomplete, forcing the Tigers to punt.

The first quarter was dominated by defense as the Tide accounted for just 85 yards of offense, while LSU tallied 55.

On the opening play of the second quarter, Daniels found Mason Taylor for a pick up of 14 yards to the Alabama 46, but Daniels was sacked on 3rd-and-11 to force a Bramblett punt.

Then came the first score of the game as Daniels found Emery, who used every bit of the sideline to take a 30-yard reception the distance, giving LSU the lead 7-0.

Young responded on the next possession, finding McClellan for a 65-yard completion over the middle of the field. Thanks to a hustle play from Major Burns to run down McClellan, the defense was able to hold the Crimson Tide to just a field goal after Perkins sacked Young on third down for a 6-yard loss.

Reichard converted on a 29-yard attempt to make it 7-3 LSU.

On the opening possession of the second half, Young found McClellan for a 9-yard gain on 3rd-and-10 from their own 39, he was stopped short of the marker by Mekhi Garner. The Tide went for it and picked up the first down on a two yard rush by Roydell Williams.

Alabama went for it again on fourth down, this time from the LSU 41-yard line, converting for a second time on a two yard rush from Williams.

Ojulari sacked Young for a four yard loss, moving the ball back to the LSU 28.

Reichard’s 38-yard attempt was good, giving Alabama their first lead of the contest at 9-7.

Avoiding pressure and managing to escape the pocket, Daniels picked up 21 yards over the middle of the field with his legs. Williams added another big rush for LSU on the drive with a 16-yard gain, putting the Tigers in business inside the red zone.

On 3rd-and-7, Daniels found Boutte for a 9-yard completion to the Alabama 9. Williams cashed in an 11 play drive, spanning 4:41, with a two yard rushing touchdown to give LSU the lead back, 14-9.

Jahmyr Gibbs busted open a 34-yard gain over the middle of the field to the LSU 42 to open the fourth quarter.

Williams rushed for a two yard touchdown to give Alabama the lead back, 15-14, but the Tide did not convert the two-point conversion attempt. 12:37 remained in the game.

With 1:47 to play, Jayden Daniels gave LSU a 24-21 advantage with a 7-yard touchdown pass to freshman tight end Mason Taylor in the left corner of the end zone.

With three 15-yard completions by Young, Alabama advanced to the LSU 28 where Will Reichard made a 46-yard field goal to tie the game with 21 seconds to play.

LSU won the coin toss and elected to play defense in the south end zone.

On the first possession, the Tide scored on a 1-yard touchdown run by Roydell Williams two plays after a long video review to confirm that a pass from Bryce Young was not tipped at the line by LSU’s Mekhi Wingo. The play was ruled pass interference.

LSU Head Coach Brian Kelly decided it was time to win, calling for a two-point play.

Daniels rifled a pass into the right flat to freshman tight end Mason Taylor, who caught the ball at the 1 and fell just inside the pylon for the victory.