Jay Ward, a senior from Moultrie, Ga., has never shied away from stepping up on defense and being a leader for his team 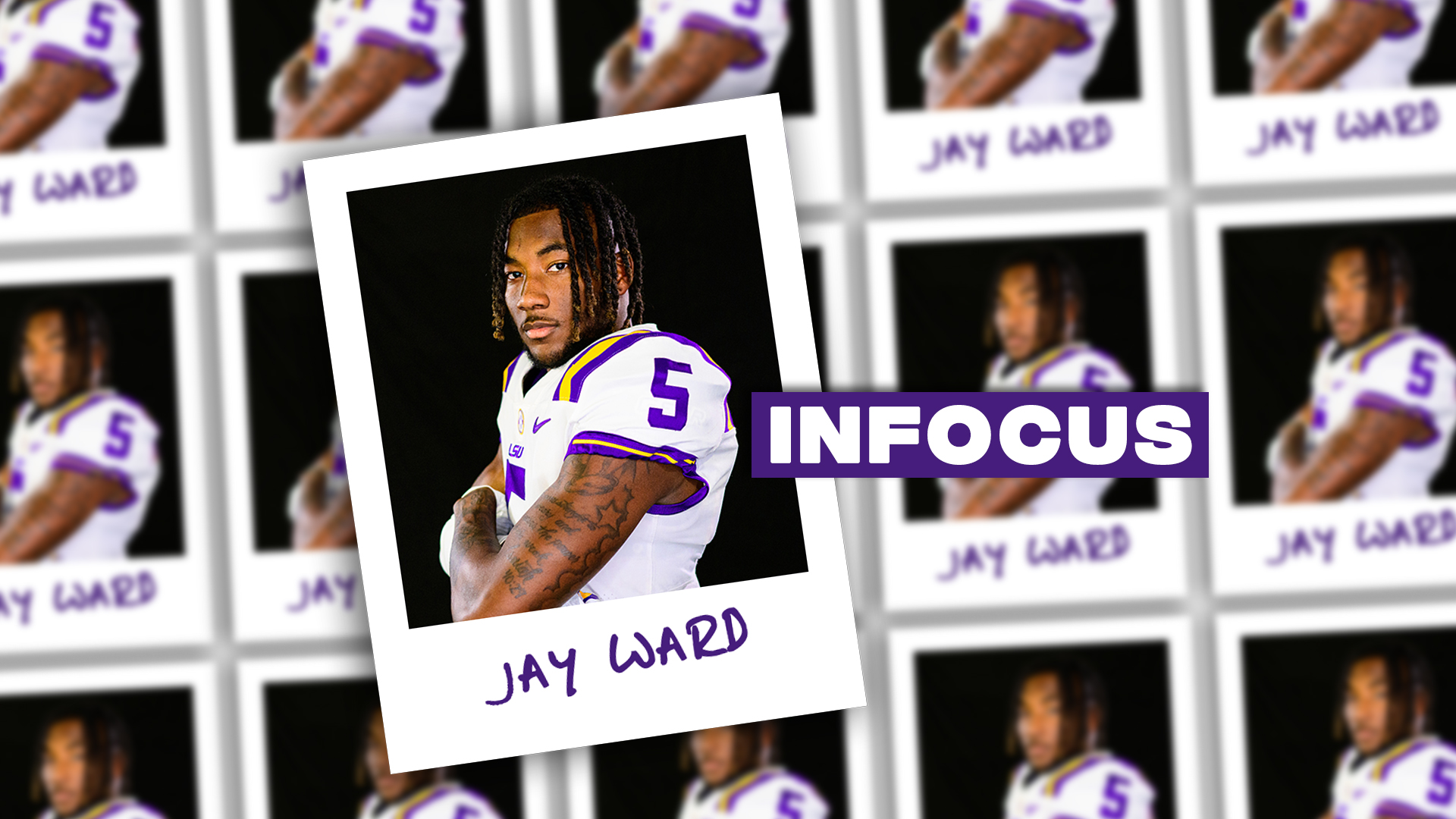 Jay Ward is not only a serious threat in LSU’s defensive backfield, he’s also a force in the classroom.

Ward, a senior from Moultrie, Ga., has never shied away from stepping up on defense and being a leader for his team. Coming off a thrilling freshman year in which LSU won the 2019 National Championship, Ward’s impeccable play-making skills continued from there.

During his high school career, Ward became confident in his leadership role during his junior year, recording 46 tackles, 12 pass break-ups, and four interceptions. Throughout his senior season he elevated his game, recording 50 tackles and six interceptions. Even with his dominating numbers, he endured losses in back-to-back championship games, which were damaging to Ward’s confidence.

The feeling of devastation for Ward was short-lived as he was being recruited by his dream school.

“Once LSU started to show interest, the decision wasn’t hard for me, this was my dream school growing up” Ward stated.

The rich history of “DBU” gave him back the confidence he had once lost as he began to envision his bright future at LSU.

Going into his first collegiate football season as a true freshman, Ward knew he had to work harder. In 2019, he recorded four tackles and three pass breakups. In the College Football Playoff semifinal game, Ward recorded two pass break-ups in LSU’s win over Oklahoma.

“I was tired of receiving the runner-up trophy, I wanted something more for myself,” is how Ward described his thought process when lining up against Oklahoma. As the Tigers went on to win the National Championship in 2019, Ward regained his confidence and was starting to become the threat that LSU needed in its secondary.

Victory was upon Ward, but the celebration was short-lived as his collegiate career was just starting.

When asked about the 2020 Covid season, Ward felt as if he “still had something to prove,” and therefore did not opt out during the year. Off the field, Ward was able to add another accolade to his trophy case – 2020 SEC Academic Honor Roll. Ward attributes “dedicating a time slot focusing solely on school work and staying in constant contact with tutors” to his academic success.

Ward not only displays his leadership on the field but also off the field as he likes to remind the younger guys that “the goal is to graduate” and to do so he says they must “maintain the same intensity in the classroom that they have on game days.”

Ward appeared in nine games in his 2020 sophomore season. Undoubtedly, he was starting to gain his confidence back as he became a show-stopper on the road at Arkansas, coming off the edge and blocking a 44-yard field goal attempt to secure a Tiger victory.

As an athlete at “DBU,” Ward’s lesson plan for the Florida game three weeks later was simple, “total domination,” and that’s exactly what was executed against the Gators, as he recorded his first collegiate interception and a career-best eight tackles.

Ward’s domination did not stop at Florida, as back at Tiger Stadium in the final game of the season versus Ole Miss, Ward ended the night with a career high of two interceptions to go along with six tackles.

Ward recalled that going into his junior year of 2021, he noticed something different about himself, his confidence. He was no longer doubtful of his abilities as he “had his confidence back,” the confidence that he had in high school which allowed him to lead his team to back-to-back championship appearances. With this confidence came trust from his coaches, which made Ward more versatile in the secondary. Starting at the safety, cornerback and dime positions, Ward’s presence was growing immensely, as he recorded double-digit tackle games against Ole Miss and Auburn.

When asked about playing multiple positions in the defensive backfield, Ward explained, “I’m playing man-to-man defense, either I will win the rep or my opponent will win the rep, and I don’t like to lose, so I was comfortable.”

Surely, Ward has a passion for football, but he also enjoys his free time. Activities in his spare time include relaxing, hanging out with his teammates, and giving back to his community.

When asked why giving back to the community is so important, Ward described the experience as “humbling,” stating that “it feels good to show up and show love to our supporters because they support us on game days.”

Before game days, Ward has a demeanor that competitors will never see.

“I’m more relaxed, I like to joke around with my teammates in the hotel,” Ward said, explaining that it helps to get him into the right mindset for the game.

Now thriving in his senior year, Ward is focused on making the most of his final season as a Tiger. With having to adjust to a new coaching staff, Ward not only had to prove something to Tiger Nation but also to his coaches.

“I love all of my coaches – in the beginning when I was in high school, Coach House actually recruited me, so him getting hired my senior year at LSU, things are coming around full circle for me,” Ward said.

Through eight games in 2022, Ward is enjoying another productive season and plans on ending his career at LSU by bringing “The Coaches’ Trophy” back to Tiger Stadium!