After considering opportunities to play for an out-of-state college and experience something new, senior running back John Emery Jr. could not shake how much playing in front of his family meant to him. A decision that was once cloudy became clear: LSU was home. 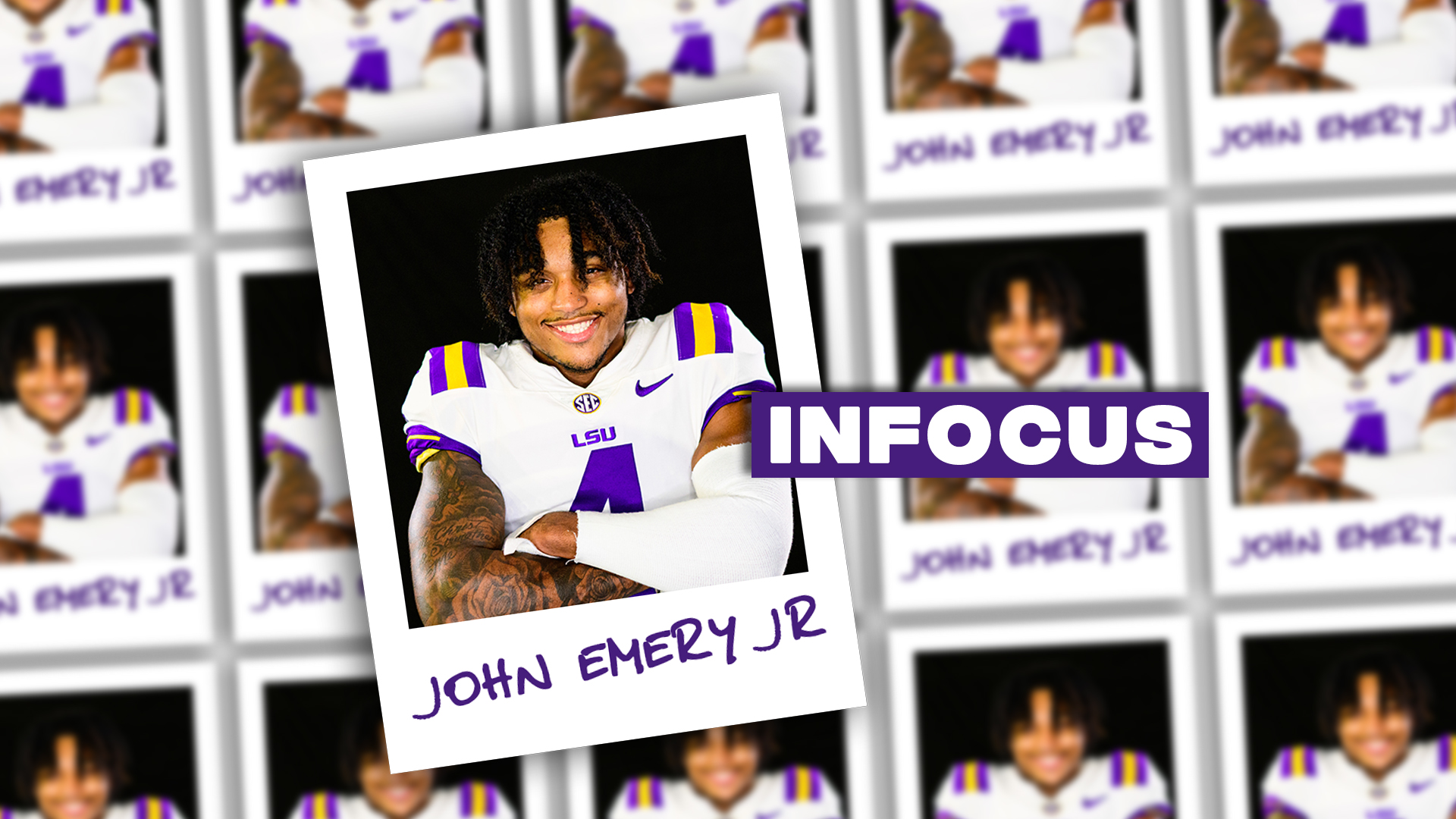 In a city just outside of New Orleans, a little six-year-old boy began a football journey that would take far more punches than expected.

Less than 10 years later, he developed into a five-star recruit and one of the most desired high school football players in the class of 2019. He could go wherever he wanted, and his opportunities were infinite.

After considering opportunities to play for an out-of-state college and experience something new, senior running back John Emery Jr. could not shake how much playing in front of his family meant to him. A decision that was once cloudy became clear:  LSU was home.

“I have a big family, and they all wanted me to stay, and that was just huge,” Emery recalled. “I was thinking about the support, and I was like, ‘Man. I’m going to do this for my family.’ It was a different feeling; the love was right there.”

The highest-profile LSU running back since Leonard Fournette was officially a Tiger, and he would have the chance to learn from future NFL stars Clyde Edwards-Helaire and Ty Davis-Price. He had the talent and the work ethic, and with those characteristics come high expectations for all that he could achieve.

He had it all.

Just when it seemed like Emery would be the guy, the first punch hit, and it was a knockout. Emery was ruled academically ineligible for the 2021 season.

“That was probably the hardest time in my life,” Emery admitted. “When I first found out, it broke me, and I was broken for a couple of weeks.”

He had just learned that the most important thing in his life would be taken away from him for a year, and two more punches hit him while he was still on the ground. Emery lost his grandmother, and his stepfather was hospitalized due to the coronavirus.

However, like a true running back, Emery never stopped fighting.

Once the middle of the ’21 season came, Emery relied on his faith as he began the grind of returning to football. He credits the people he had around him for pushing him harder than ever, and realizing that although he was down, he was never out.

Emery immersed himself in his workouts, adding video games and bike riding as his new hobbies. If you saw Emery biking around campus or on the levee, that was his escape. It was where he could reflect on everything and take his mind off the pain of losing so many things that he loved.

After a long year of tremendous work, Emery was primed for a huge comeback in the 2022 season. However, in his words, there was another “right-hook” waiting for him.

Emery would still be sidelined for the first two weeks of the 2022 season, and he had no idea it was coming.

“I worked so hard to get where I was, and it came up on me out of nowhere,” Emery explained. “I thought I had all the requirements.”

Most of Emery’s frustration came from how the prolonged suspension would be perceived by others. Quickly, however, Emery embraced his confidence, and channeled all of his energy into knowing he would come back even stronger.

Emery was finally reunited with the game on September 17, 2022, when the Tigers defeated the Mississippi State Bulldogs in Death Valley. He had done all of the work to get himself back on that field, and it did not go unnoticed.

“I’m really proud of the progress that he’s made in my short time here,” LSU coach Brian Kelly said. “For John, in terms of getting a chance to get out and play for LSU, he’s worked hard to get back into this position. And now he gets an opportunity. We’re glad to get him back. He was elated after the game, that he actually played football for the first time in a long time.”

Emery was back, doing what makes him feel the most like himself, in the place that feels like home. It was a moment that can never be replaced, nor taken away from him.

Emery has been at LSU for four years, and everybody wanted the success story they thought would unfold when he committed to LSU in 2019.

Emery’s journey has been anything but that. Whether people on the outside realize it or not, the journey is bigger than just football.

“Football doesn’t build character. It reveals character,” Emery said. “Getting through what I went through makes me a leader. A lot of people look up to me for not falling, and my ability to connect with people builds trust on the field. That’s key for me in being a role model.”

Emery was not only thrown a couple of punches; he was served a few hard knockouts. Although nothing went according to plan, he would not change what he has gone through.