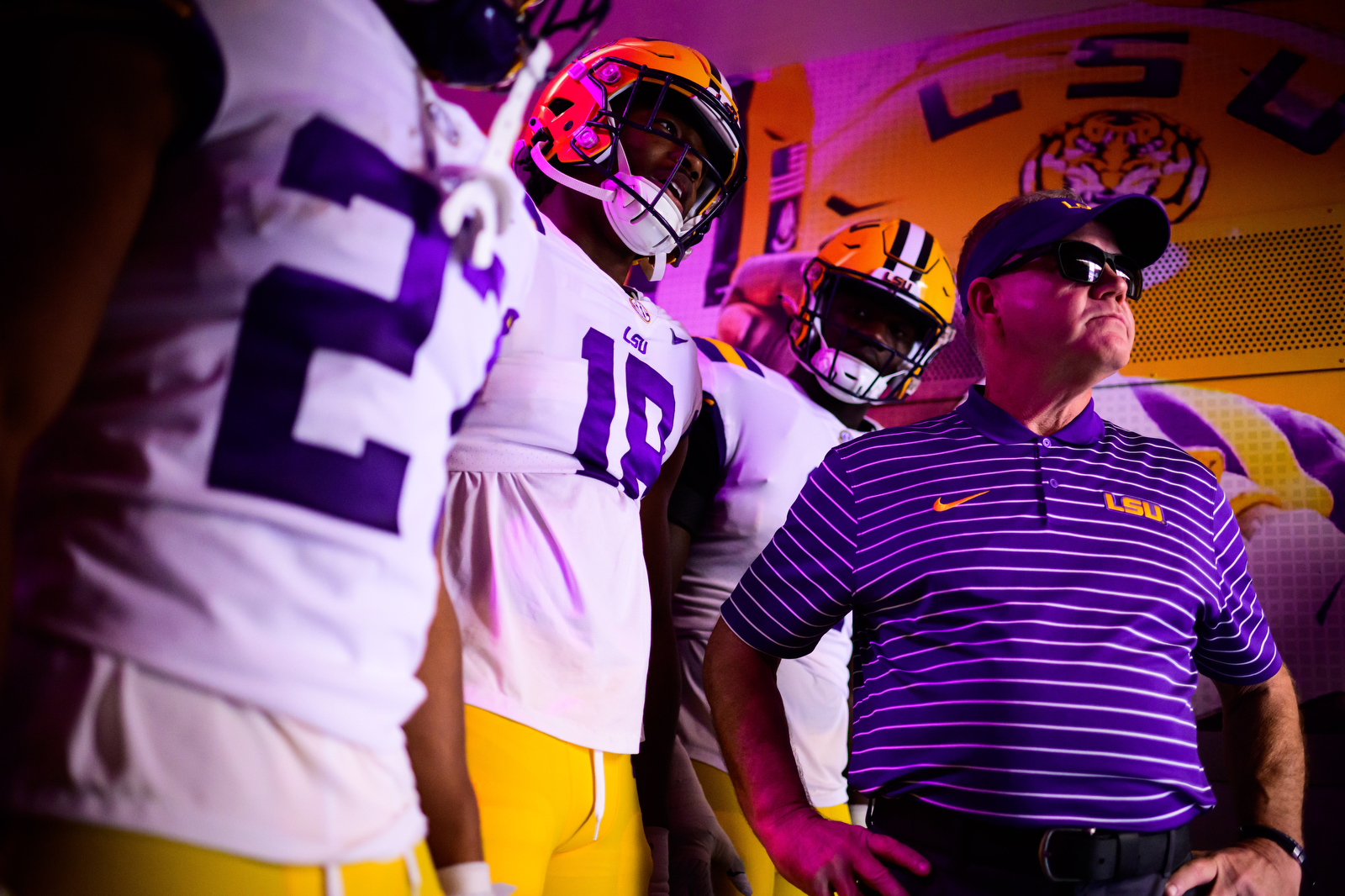 ATLANTA – Officials from the Bobby Dodd Coach of the Year Foundation and Chick-fil-A Peach Bowl today announced that LSU head football coach Brian Kelly has been selected as The Dodd Trophy Coach of the Week.

The Dodd Trophy Coach of the Week award honors a football coach who led his team to a significant victory during the previous week, while also embodying the award’s three pillars of scholarship, leadership and integrity.

Brian Kelly led LSU to a 45-20 victory over No. 7 Ole Miss on Saturday, handing the Rebels their first loss of the season. After trailing 17-3 early in the second quarter, the Tigers finished the game on a 42-3 run to capture Kelly’s first win over a top-10 opponent in his first season in Baton Rouge. LSU quarterback Jayden Daniels ran for three touchdowns and passed for two scores to lead the Tigers, setting an LSU record for touchdowns rushing in a season by a quarterback with nine.

The Tigers’ sixth win of the season moved them to No. 18 in the most recent AP poll and into a first-place tie in the SEC West Division standings.

“This was a signature win for Coach Kelly and LSU football in his first season with the Tigers,” said Jim Terry, chairman of the Bobby Dodd Coach of the Year Foundation. “Coach Dodd would tell you a win like this is a culmination of months of preparation, and a commitment to excellence on both sides of the ball.”

A 33-year veteran of college football, Kelly was named the 34th head coach of the LSU football program in November 2021. Kelly arrived in Baton Rouge with more than 280 career victories in his collegiate head coaching career, the most among active FBS coaches. He is one of only five active FBS coaches who have guided their programs to multiple undefeated regular seasons since 2009, and he has led his teams to the College Football Playoffs in two of the last three seasons. Prior to his time at LSU, Kelly served 12 years leading Notre Dame, where he was the winningest coach in Fighting Irish history and was named the 2018 winner of The Dodd Trophy. Kelly also had stops at Cincinnati, Central Michigan and Grand Valley State, where his head coaching career began.

In the community, Kelly and his wife Paqui founded the Kelly Cares Foundation, after Paqui was diagnosed with breast cancer twice. The Foundation aims to strengthen communities by investing resources to improve health and education around the disease. In August, Kelly rallied his student-athletes to volunteer at the Greater Baton Rouge Food Bank, sorting and packing food boxes for the local community. Kelly also recently donated a school-record $1 million to support the university’s football facilities earlier this month.

“Coach Kelly has made an impact at LSU from the day he was hired, both on and off the field,” said Gary Stokan, CEO and president of Peach Bowl, Inc. “He has gradually improved each football program at every one of his coaching stops, enhancing the product on the field, and preparing his student-athletes to become leaders off it as well. As a former winner of The Dodd Trophy, he truly embodies everything that this award stands for as it relates to scholarship, leadership and integrity.”

The Dodd Trophy – along with the Dodd Trophy Coach of the Week Award – celebrates the head coach of a FBS team who enjoys success on the gridiron, while also stressing the importance of scholarship, leadership and integrity.

A panel consisting of all previous winners, national media, a member of the Dodd family and a College Football Hall of Fame member will identify the final list of potential recipients at the conclusion of the 2022 season. The winner of the 2022 Dodd Trophy will be announced in Atlanta during the week of the College Football Playoff Semifinal at the Chick-fil-A Peach Bowl.