Former LSU All-Americans Aaron Nola of the Philadelphia Phillies and Alex Bregman of the Houston Astros will meet in the World Series that begins with Game 1 Friday night at Minute Maid Park in Houston. 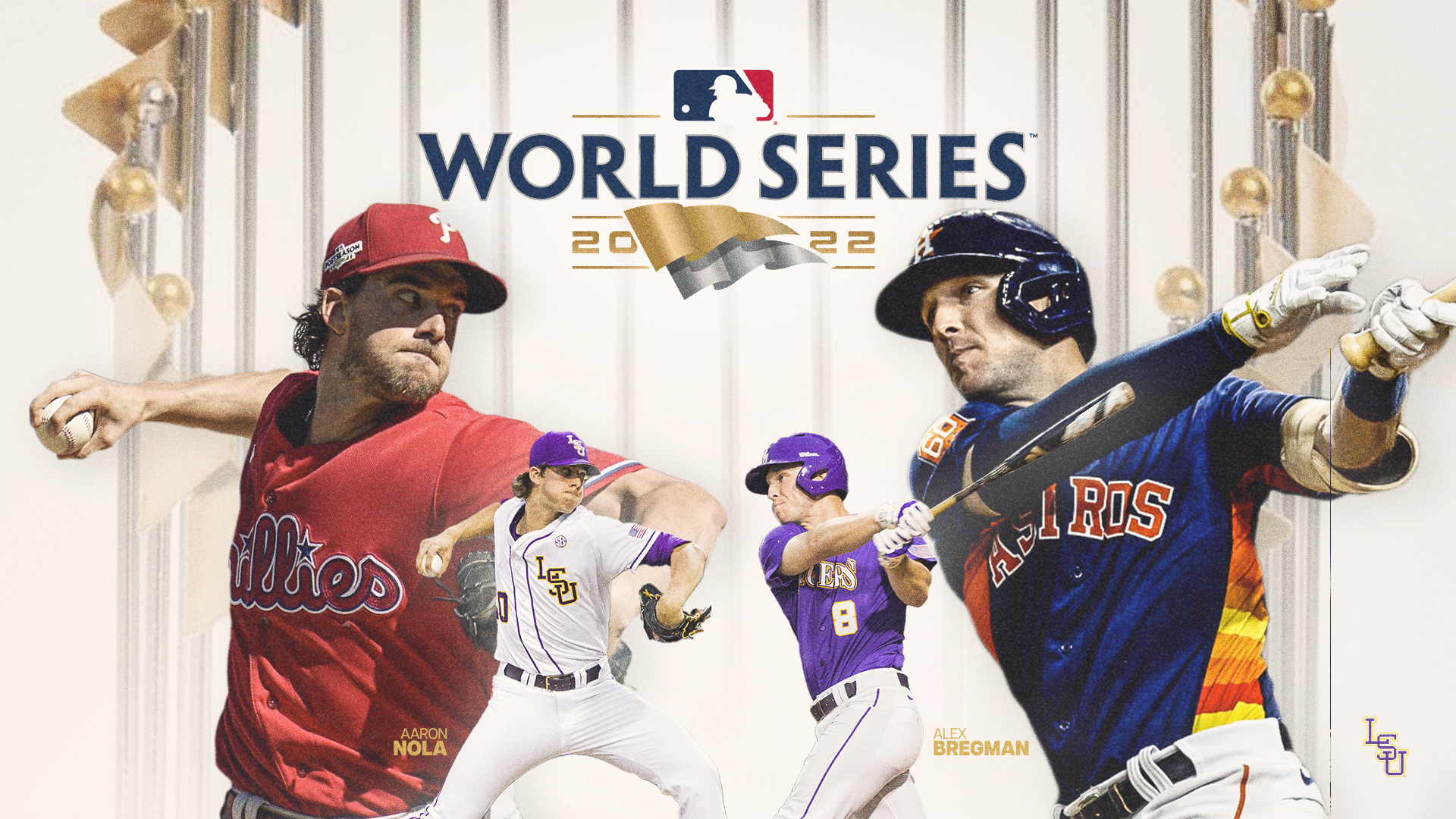 BATON ROUGE, La. – Former LSU All-Americans Aaron Nola of the Philadelphia Phillies and Alex Bregman of the Houston Astros will meet in the World Series that begins with Game 1 Friday night at Minute Maid Park in Houston.

Nola, a right-handed pitcher from Baton Rouge, and Bregman, a third baseman from Albuquerque, N.M., were LSU teammates in 2013 and 2014, and they were instrumental in the Tigers’ drive to the 2013 College World Series.

Nola, a 2018 National League All-Star, helped lead Philadelphia this season to its first postseason appearance since 2011 and its first World Series berth since 2009. He recorded an 11-13 mark and a 3.25 ERA in 205 innings during the 2022 regular season with 29 walks and 235 strikeouts. Nola this season registered the most strikeouts with fewer than 30 walks in Major League Baseball history.

Nola, Philadelphia’s No. 2 starter, has recorded wins this postseason over the St. Louis Cardinals in the Wild Card Series and over the Atlanta Braves in the Division Series. The Phillies’ first-round draft choice in 2014, he is in his eighth MLB season in Philadelphia.

Bregman, a 2017 World Series champion, helped lead the Astros to the American League pennant for the fourth time in six seasons. A two-time AL All-Star, the 2018 All-Star Game MVP, and a 2019 Silver Slugger Award winner, he batted .259 during the 2022 regular season with 38 doubles, 23 homers, 93 RBI and 93 runs scored.

Bregman is in his seventh season with the Astros, who selected him as the No. 2 overall pick in the 2015 MLB Draft. He batted .333 (5-for-15) in Houston’s Division Series sweep of the Seattle Mariners with one double, one homer and three RBI, and he hit .333 (5-for-15) in the League Championship Series sweep of the New York Yankees with one double, one homer and four RBI.

Bregman has 14 homers and 43 RBI in 80 career MLB postseason games, marking the most postseason home runs by a third baseman in MLB history.

Bregman played shortstop at LSU from 2013 through 2015 and led the Tigers to two College World Series appearances. He was a two-time first-team all-American for the Tigers, and he was named the recipient of the 2013 Brooks Wallace Award as the nation’s best shortstop.