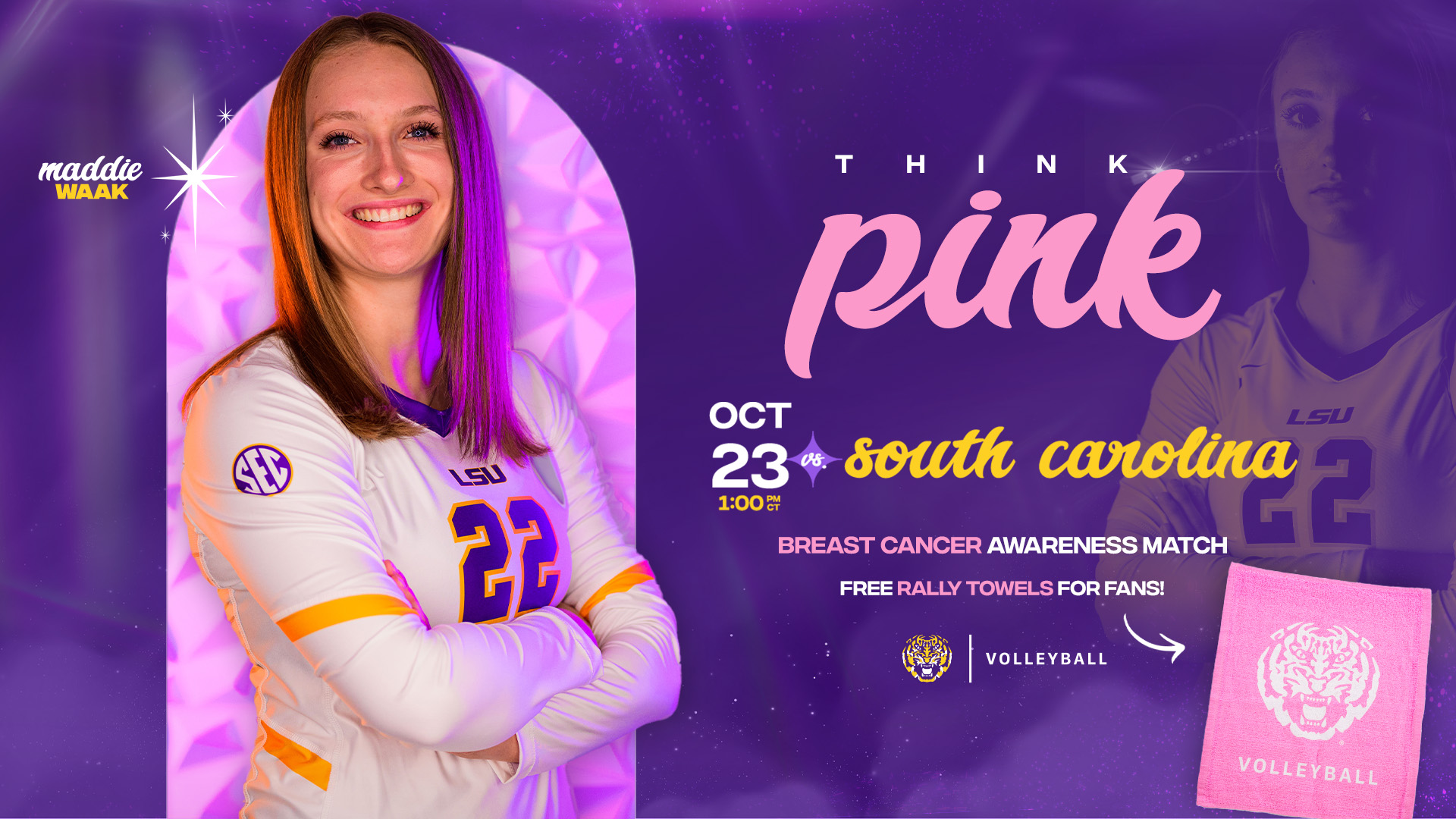 BATON ROUGE, La. – The LSU volleyball team is back in the Pete Maravich Assembly Center and will host South Carolina at 1 p.m. on Sunday, Oct. 23. The match will air on SEC Network.

Sunday’s match will be the Breast Cancer Awareness Match as LSU will honor breast cancer survivors during a set break. Fans in attendance will receive a free pink rally towel.

Outside hitter Sanaa Dotson ranks No. 6 in the SEC and No. 55 in the NCAA with 3.90 kills per set and her 300 total kills leads the SEC. She also ranks No. 9 in the conference with 4.33 points per set and leads the team with 15 aces. Outside hitter Paige Flickinger follows with 2.49 kills per set, has 13 aces and averages 2.51 digs per set. Dotson has logged seven double-double this season, including four in the last five matches, and Flickinger has three double-doubles in the last four matches, including a current streak of two consecutive double-double performances.

Middle blocker Anita Anwusi leads the team with 1.08 blocks per set (83 total) after registering a career-high nine blocks at Alabama. Anwusi has collected 137 total kills on the year (1.78/set).

Setter Josie Vondran averages 7.00 assists per set and has 59 kills, 33 blocks and 12 aces this season. Freshman setter Maddie Waak has registered 4.55 assists per set to go along with 13 aces. Waak turned in her first career double-double with career-highs of 39 assists and 10 digs at Alabama.

Libero Ella Larkin anchors the defense with a league-best 4.51 digs per set (347 total) and has accumulated three 30-plus dig performances this season. Larkin also has 12 aces this season.

South Carolina (10-8, 4-4 SEC) is coming off a five-set victory against Mississippi State in Columbia, S.C. where they are 9-1 on the season. On the road however, the Gamecocks have a 1-6 record.  South Carolina will enter Sunday’s contest averaging 12.28 kills per set and a .211 hitting percentage behind 11.61 assists per set. Defensively, the Gamecocks allow its opposition a .204 hitting percentage and ranks second in the SEC with 2.65 blocks per set.

Outside hitter McKenzie Moorman leads South Carolina with 2.96 kills per set followed by outside hitter Riley Whitesides’ 2.89 kills per set. Setters Claire Wilson and Dalaney Hans average 5.20 and 5.07 assists per set, respectively, and Hans leads the team with 24 aces. The Gamecocks have two middle blockers who rank in the top 10 of the SEC in blocks per set, including Ellie Ruprich (No. 3 – 1.36/set) and Oby Anadi (No. 7 – 1.17/set), and libero Jenna Hampton sits at No. 2 behind LSU’s Larkin at 4.28 digs per set.

LSU leads South Carolina in the all-time series 29-18 and are on a three-match winning streak.