Jaray Jenkins, a native of Jena, La., is at his best when the Tigers need him the most. 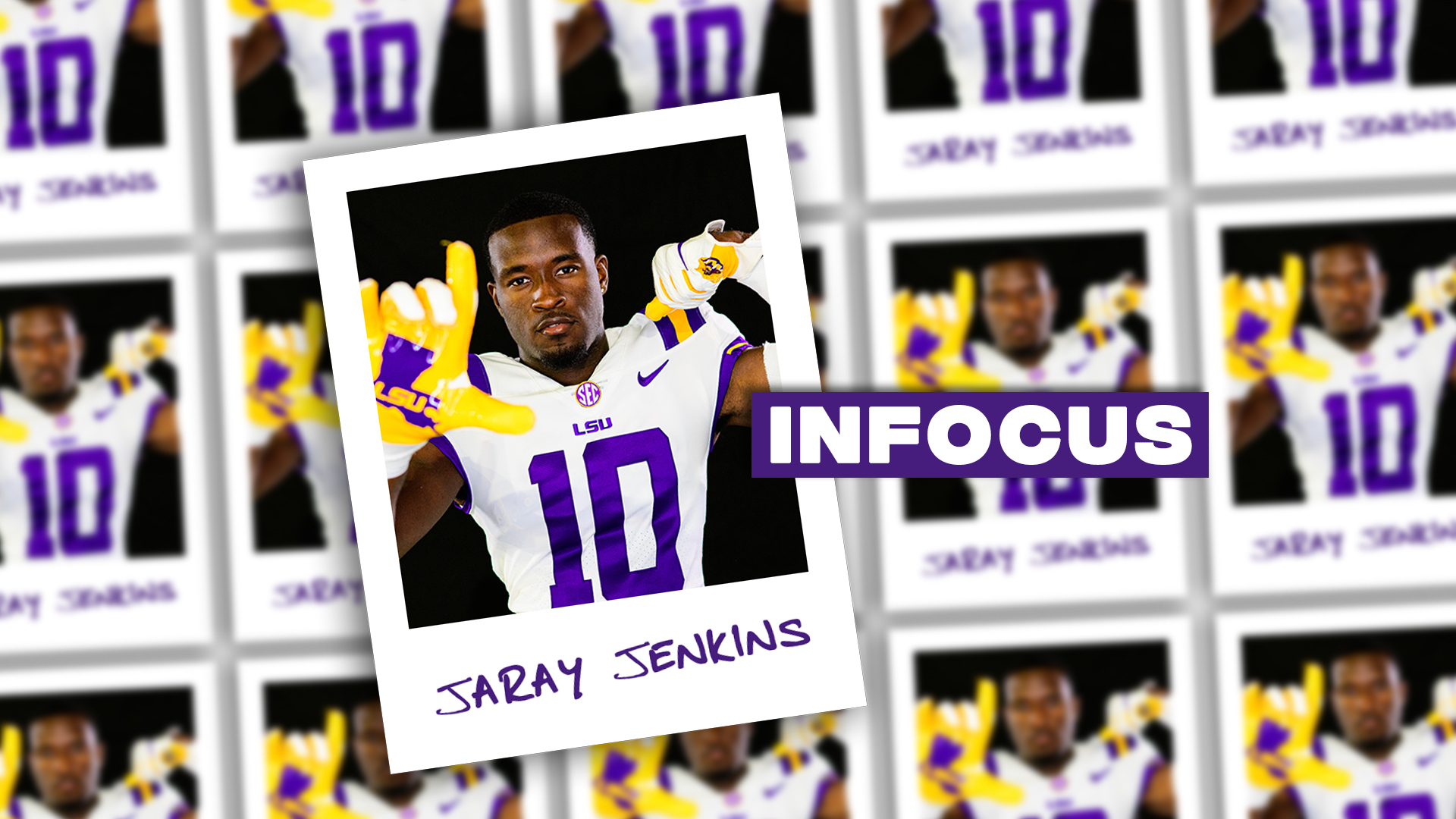 For the last few years, it seems like Jaray Jenkins always has the answer.

From the little kid chasing his older brother around a football field, to drowning in darkness as a senior in high school, to scoring game-winning touchdowns and dancing in the end zone, he has always found the answer.

The Jena, La., native spent his younger years playing his favorite game, studying every possible way he could be better than his older brother. Although he earned All-District honors at cornerback, safety and outside linebacker in high school, Jenkins married the wide receiver position for a more personal reason.

“I was more dominant as a receiver, but I really wanted to be better than my brother,” Jenkins admitted. “Seeing him out there, I was like, ‘Yeah. I’m going to play receiver.’”

Leading into his senior year at Jena High School, Jenkins was a four-star recruit and a member of the ESPN 300 with 111 career receptions, 1,960 receiving yards, 448 rushing yards and nine rushing touchdowns. Although his high school field is well-seasoned with Jenkins’ footsteps, it is also filled with his pain.

In a split second, Jenkins dreams quickly seemed out of reach. As a senior, Jenkins suffered a broken tibia in the first game of the season. What is supposed to be every high school athlete’s storybook season was over quicker than he could blink, and perhaps the fear of what his future held was the deepest cut.

“That was definitely the lowest point of my life,” Jenkins recalled. “It was heartbreaking. I was down; it was really hard on me and it was emotional. But, I knew I was going to get back healthy and that lifted me up.”

Jenkins’ answer for the injury problem:  his mindset.

His resiliency was on full display from the first day he stepped onto LSU’s campus. As a freshman, coming in with a serious injury makes proving yourself all the more difficult. Lucky for Jenkins, he laughs at fear and embraces doubt.

He hit the training room hard, and LSU’s athletic training staff poured just as much of themselves into Jenkins’ rehabilitation as he did. Although he redshirted his freshman season and did not play, Jenkins’ relentless work ethic and commitment to returning to the game set the tone for the progress he would make year to year. He recorded five catches in his first season of action in 2019, had 23 receptions in 2020, and he caught a total of 34 passes last season.

When the Tigers need a big play, Jenkins is the answer.

In 2020, he tallied the game-winning touchdown against Arkansas. The 2021 season left him ranked second on the team in receiving yards (502) and receiving touchdowns (six), while sitting at third in receptions (34). He solidified the upset of 14th-ranked Texas A&M by scoring on a 28-yard pass with just 20 seconds left on the clock. Against Florida, a storied rival, Jenkins grabbed a career-high three touchdown passes in the win, with his 1-yard TD reception clinching the game for the Tigers.

In the words of LSU head coach Brian Kelly, Jenkins is the most consistent wideout in a stacked, extremely talented wide receiver room.

“He’s been consistent each and every day,” Kelly said. “Practice is preparation. He’s bigger, he’s stronger. And there’s a lot of really good wide receivers, but he has really done a great job of singling himself out with his consistent play.”

Consistency may be his differentiator, but it is also his innate ability to be perfectly clutch in the most desperate times. And the best part? It comes naturally.

“I want to attack every play, whether it’s one of those crunch moments or not,” Jenkins explained. “The quarterback goes through the reads, and obviously in those times, he comes back to me and I make the catch. I feel like I don’t change anything at all; I just do what I do.”

That confidence has never wavered. Even when the early portion of his career was overshadowed by former LSU teammates and current NFL superstars Justin Jefferson and Ja’Marr Chase, Jenkins never lost sight of who he is, and what he brings to the table. If anything, his relationship with those guys only pushed him to be better.

“Being around them, seeing how they work out in practice and how it translated into the game, I would take that same mindset,” Jenkins said. “Work hard in practice, and the game will speak for itself. Seeing the praise and recognition they got, it only made me go harder.”

Recognizing how much older players impacted him, Jenkins automatically became a leader for the younger receivers that followed him. It was natural for him to pass on what he learned from the veterans to the next set of guys that will be dancing in the end zone.

“I know that I’ve been here for a minute, and I see how the older guys helped me when I was younger, and now I am the old guy,” Jenkins said with a smile. “I’m trying to pass down what they gave to me to the freshmen and sophomores now. I feel like it was built into me, and that’s why I do what I do.”

If his teammates were to take anything from having Jenkins as their teammate, he hopes they view him as their ultimate leader. He kept everyone right, and helped every single player elevate their game.

While Jenkins devotes a lot of himself to his teammates, the importance of family is not lost on him. They have endured so much together, and Jenkins would not be where he is without them.

“They sacrificed a lot for me, and my hometown has always been there supporting me no matter what,” Jenkins said. “I feel like with all of that, it made me a man, and who I am now.”

Jenkins graduated from LSU in the summer of 2022 with a degree in sport administration, a feat of which he and his family are beyond proud. In the words of Jenkins, it meant everything to him, nobody can take that away from him.

A fighter, the clutch player, the leader, the graduate. He has it all. But, there was one question Jenkins did not have the answer to.

At least at first.

If young Jaray were to look at you now, what would he think?

The 6’2”, 200-pound athletic machine smiled, stared at the ground and shifted in his chair. He can dodge the most talented athletes in the world, but a question about himself got him.

Perhaps the question was too selfish for the humble, team-first guy. When rephrased to what might his family say about his growth, Jenkins found his footing.

“I think they would say that I’ve grown up a lot,” Jenkins said. “From being the class clown, to now being a young man that people are looking up to. The way I carry myself is much stronger now.”

Maybe the question about himself was challenging, but Jenkins will never struggle to find the answer for where he wants to go from here.

He will find the answer for how to get there.