Soccer Set To Take On No. 9 Arkansas 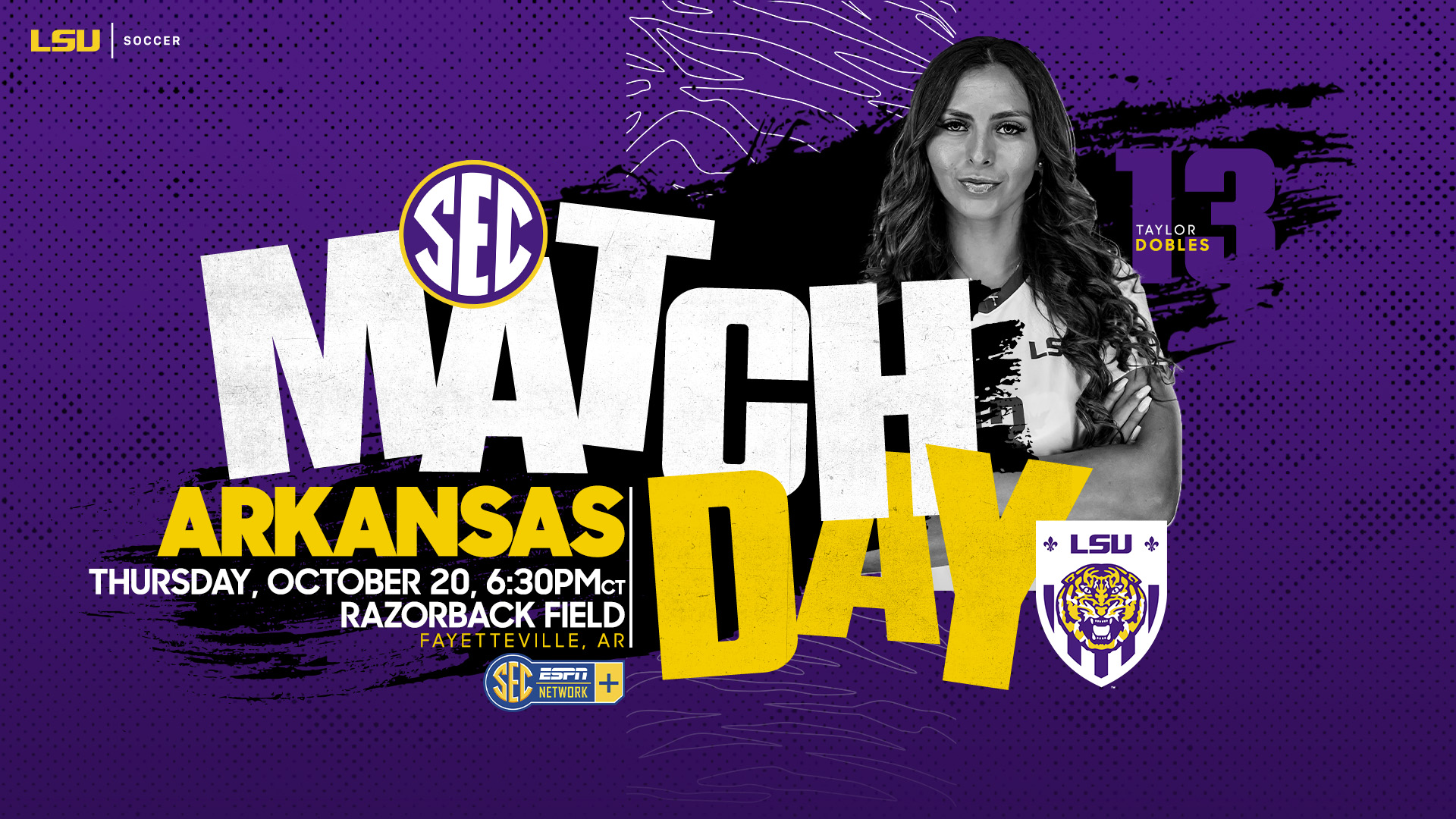 The match will available through livestream on SEC Network Plus. Links to watch and live stats for the match can be found on lsusports.net.

The Tigers hold a 15-11-3 lead in the series against the Razorbacks. The teams met twice in the 2021 season; once in the regular season finale when LSU earned the highest ranked win in program history as they beat No. 4 Arkansas 4-2, and again in the quarterfinals of the SEC Tournament, where Arkansas won by a score of 2-1.

LSU traveled to No. 16 Tennessee on Friday, October 14, where the two teams battled to a 0-0 draw in Knoxville.

The first half saw good possession from both sides of the ball, but neither team could find the advantage. Goalkeeper Mollee Swift made her first save of the night in the 31st minute as she collected a shot from Taylor Huff in the bottom left corner, but that was all for the first half.

The second half saw the Tigers create more scoring chances. Forward Sage Glover took a shot on goal in the 57th minute as defender Shannon Cooke sent a ball up-field and over the Volunteers defense that found Glover, who timed the run on the ball and took a one-touch shot straight to Tennessee goalkeeper Lindsey Romig.

Forward Mollie Baker saw two opportunities in front of the net as she took shots in the 68th and 84th minutes. In the 68th minute, Cooke sent a through ball to find Glover, who beat a Tennessee defender on the flank to send the ball inside the box and found Baker, but she couldn’t find the touch and. Baker’s second shot was launched from a distance outside the box and landed just over the crossbar.

Swift collected two more saves in the second half in the 54th and 80th minutes. The senior tallied three saves on the night. Romig collected one save on the night.

Maya Gordon and Angelina Thoreson also took last minute chances in the second half in search of a goal but couldn’t find the back of the net for the Tigers.

Neither team could find the game-winner and the match ended in a 0-0 draw. The LSU defense locked down for the full 90-minute battle and is only the second team to hold the Volunteers offense scoreless this season.

After scoring three each in non conference play, junior Mollie Baker and freshman Sage Glover both found the back of the net in SEC play for the first time in their collegiate careers in the Tigers win over the Kentucky Wildcats on Sunday, October 2. The forwards narrowly trail the top scorers with four each on the year.

The forward ranks sixth in the country for assists.

Hermannsdottir leads the LSU squad in goals scored with six in her first season with the Tigers. As a freshman, she earned the start in 12 out of the Tigers 15 matches and recorded six goals, two assists, 13 shots on goal and 19 points. She ranks ninth in the country in goals scored.

Thoreson leads the Tigers with seven assists on the season. Along with a team-high seven assists, Thoreson has also recorded one goal, 10 shots on goal and nine points through 15 games. She started in 13 of those matches. The forwards ranks sixth in the country for assists.

LSU’s matchup against No. 9 Arkansas will be the squad’s fifth ranked opponent matchup this season and third in conference. The Tigers have won 18 and drawn 13 matches against nationally-ranked opponents in their history.

LSU has a 5-7-2 record against ranked opponents under head coach Sian Hudson. During Hudson’s time, LSU has played in 13 ranked matches and have been competitive in all of them. The five ranked wins under Hudson come from No. 14 Ole Miss, No. 15 USF, No. 19 UCF, No. 21 Arizona State, and No. 4 Arkansas.

LSU resulted in draws against a ranked opponent against No. 14 Pepperdine and No. 16 Tennessee this season.

LSU sits in sixth place in the SEC with three games remaining on the conference schedule. The top 10 teams in the league advance to the conference tournament which will take place from October 30 – November 6 in Pensacola, Fla.

The Tigers have earned 11 points in conference play this year and rank fourth in the SEC West division. The two division champions will serve as the top two seeds at the SEC Tournament, and the final eight teams are decided by points accumulated in conference play.