Volleyball Returns to the Floor, Travels to Alabama for Midweek Match 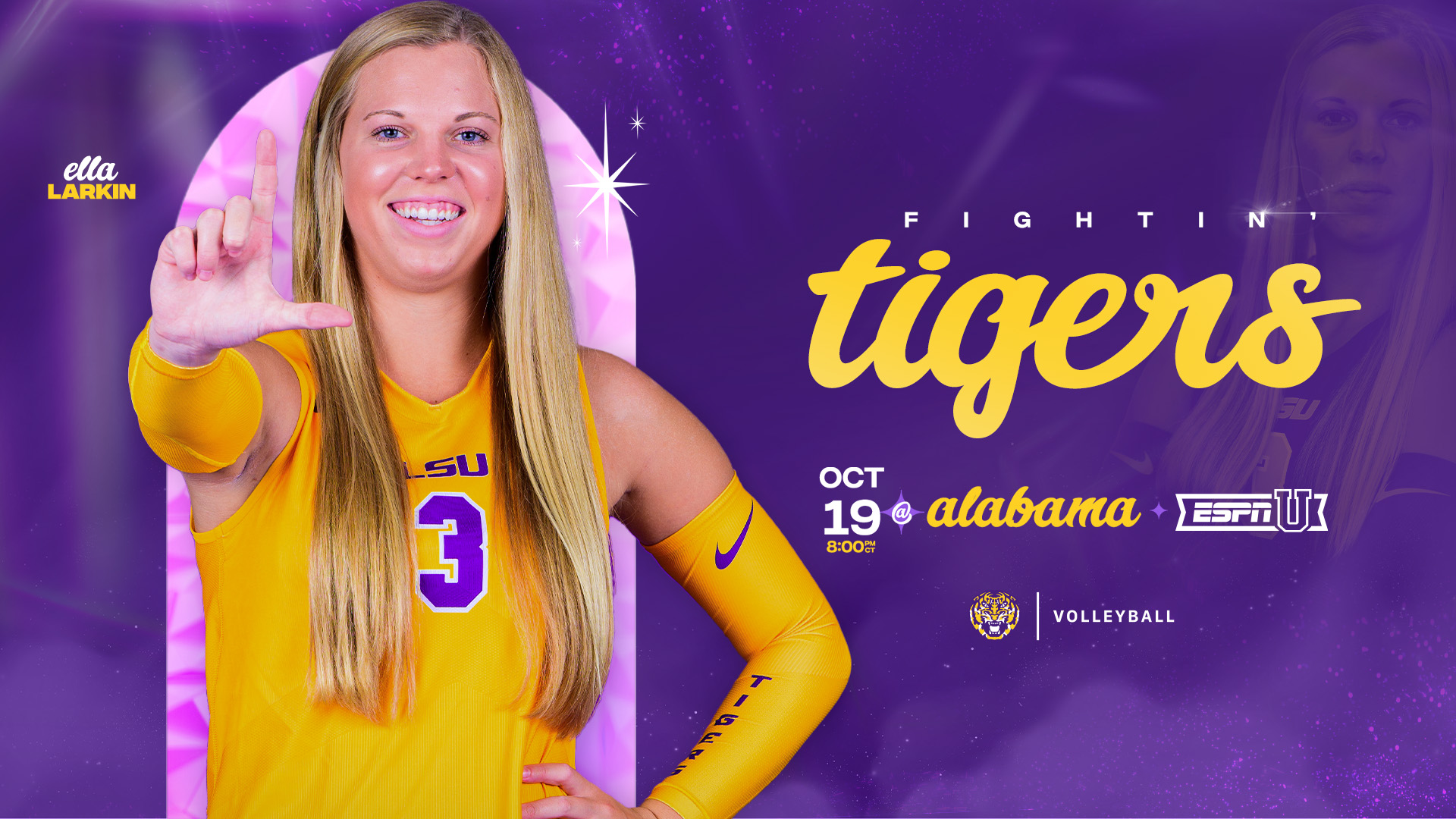 BATON ROUGE, La. – A week-long hiatus concludes as the LSU volleyball team springs back into action with a televised match at Alabama on Wednesday, October 19 at the Foster Auditorium in Tuscaloosa, Ala.

First serve is set for 8 p.m. CT and will be aired on ESPNU.

LSU (10-8, 4-4 SEC) posts a 6-4 record in its last 10 matches and sit at No. 36 in the latest RPI rankings. The Tigers are also receiving votes on the AVCA national poll for the fourth consecutive week. The Purple and Gold are hitting .236 on the season behind 12.97 kills per set and 12.08 assists per set. The Tigers’ defense has allowed its opponents a .205 hitting percentage this season (No. 5 in SEC) and has held teams under a .200 attack percentage nine times. LSU also averages 2.01 blocks per set and 14.69 digs per set (No. 4 in SEC) this season.

Outside hitter Sanaa Dotson ranks No. 5 in the SEC with 3.92 kills per set and No. 8 in the conference with 4.34 points per set. Dotson also leads the team with 14 aces. Other top offensive contributors for the LSU Tigers consist of outside hitters Paige Flickinger (2.42 kills/set), Samarah Hill (2.30 kills/set) and Hannah Jacobs (2.17 kills/set).

Setter Josie Vondran ranks No. 10 in the SEC with 7.15 assists per set and has 58 kills, 33 blocks and 12 aces this season. Freshman setter Maddie Waak has registered 4.29 assists per set to go along with 13 aces.

Libero Ella Larkin anchors the defense with a league-best 4.39 digs per set (316 total) and has accumulated two 30-plus dig performances this season. Larkin also has 13 aces this season.

Alabama (7-12, 1-6 SEC) picked up its first SEC win of the season when they swept Missouri last Wednesday night. The strength of the team is their ability to serve tough as they lead the SEC and ranks No. 10 in the country with 1.94 aces per set. Otherwise, they average 12.38 kills per behind a .175 hitting percentage and 11.23 assists per set – all of which rank last in the league.

Middle blocker Alyiah Wells leads the Crimson Tide with 3.23 kills per set and has a .352 hitting percentage that ranks No. 7 in the SEC. Wells also paces the team with 71 blocks on the year. Setter Brooke Slusser ranks ninth in the conference with 9.54 assists per set and adds 17 aces and 30 blocks. Outside hitter Abby Marjama leads the conference and ranks No. 5 in the NCAA with 45 aces this season (0.67 per set).

LSU is in the driver’s seat in the all-time series against Alabama with a 40-30 record. The Tigers are on a two-match winning streak versus the Crimson Tide and have won five of the last six matches.