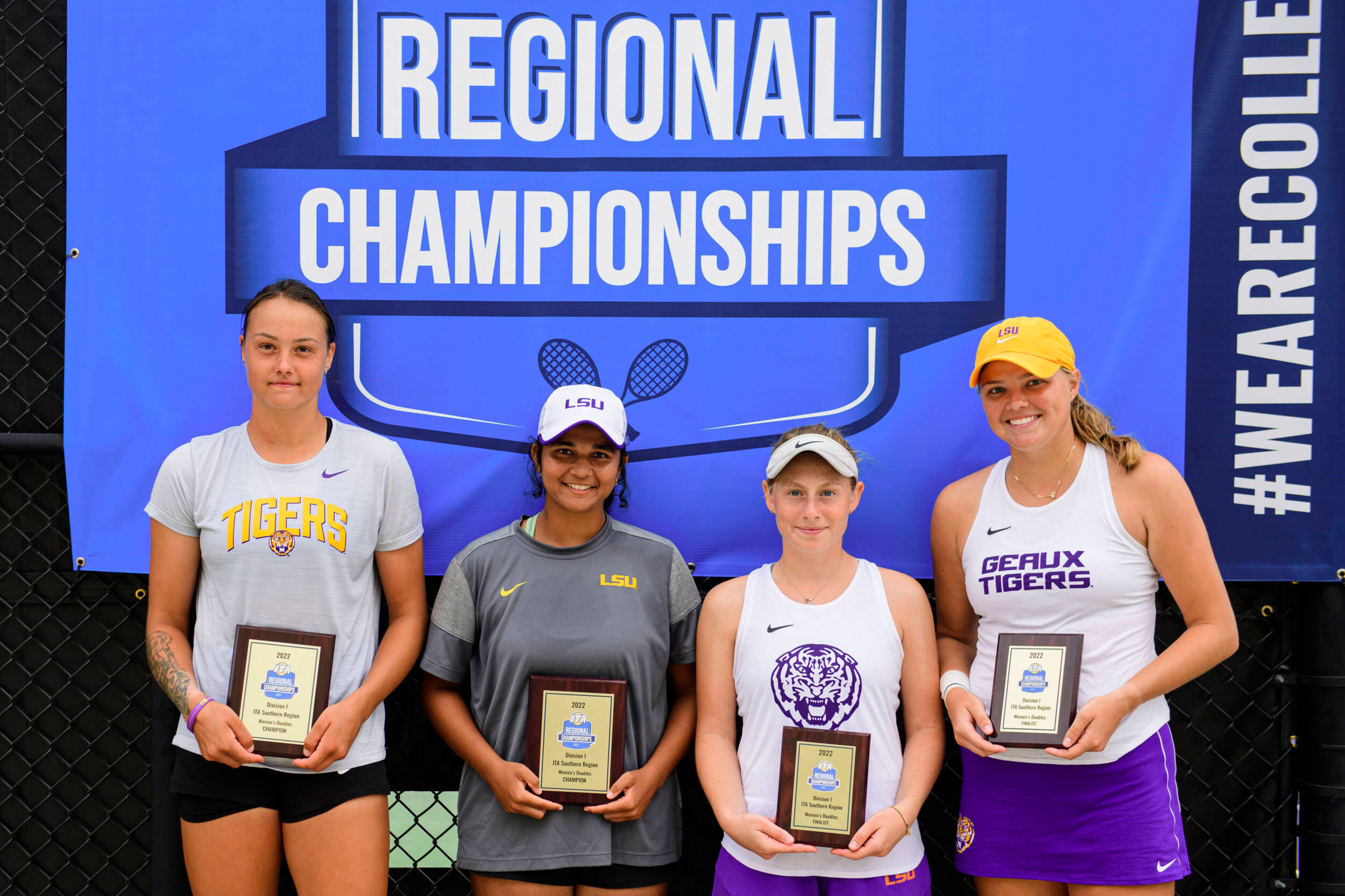 BATON ROUGE, La. – In a battle of experience versus youth, the freshman doubles duo of Anastasiya Komar and Nikita Vishwase knocked off the team of graduate student Mia Rabinowitz and senior Maggie Cubitt to claim the 2022 ITA Women’s Southern Regional doubles title on Monday at the LSU Tennis Complex.

Taylor’s Thoughts
“We couldn’t be prouder of our doubles play throughout the tournament,” head coach Taylor Fogleman said. “To have almost three semifinalists in a competitive region like ours is a massive accomplishment for the team. From our two finalists teams today to Safiya (Carrington) and Nina (Geissler), we played at a high level in doubles all tournament. Huge credit to Nas (Komar) and Nikita (Vishwase) for their doubles titles as well as Maggie (Cubitt) and Mia (Rabinowitz) for being finalist. Overall, we’re just proud of everyone’s play.”

Singles Result – Semifinal
Before competing in the doubles final, Komar opened the day by taking on the region’s top-ranked player in No. 52 Emma Antonaki of Mississippi State. The Tiger took an early lead and went on to win 6-2 to take control of the match. The second set had Komar take the early lead again, but Antonaki managed to close the gap this time and trailed at 5-4 after nine games. At the 40-30 point in the game, Komar got the hold to secure a 6-4 win and book a spot in the singles final tomorrow morning.

Doubles Result – Final
“Old versus New” was the theme for the match as the experience pair of Rabinowitz and Cubitt faced the freshmen duo of Komar and Vishwase. The veterans jumped out to a 5-2 lead in the first set before rain entered the area and forced the remainder of the match indoors. When the teams resumed play indoors, Komar and Vishwase turned the set on its head and won five straight games to take the first set, 7-5.

The second set was a reverse of the first, with the freshmen taking an early lead and going ahead 5-2 before Cubitt and Rabinowitz held on multiple match points and tied the match at 5-5. Komar and Vishwase were able to finish strong, however, and won the final two games to win 7-5 and clinch the region’s doubles title.

Both doubles duos qualified for the ITA Fall National Championships set to start on Nov. 2 at the Barnes Tennis Center in San Diego, California, and will compete against other regional finalists and champions while there.

Up Next
The singles final of the ITA Women’s Southern Regional will take place at 10 a.m. CT on Tuesday morning at the LSU Tennis Complex as Komar faces Ole Miss’ Lillian Gabrielsen.